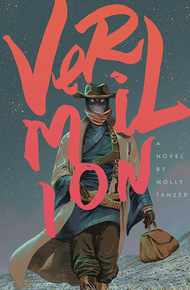 Gunslinging, chain smoking, Stetson-wearing Taoist psychopomp, Elouise "Lou" Merriwether might not be a normal 19-year-old, but she's too busy keeping San Francisco safe from ghosts, shades, and geung si to care much about that. It's an important job, though most folks consider it downright spooky. Some have even accused Lou of being more comfortable with the dead than the living, and, well… they're not wrong.

When Lou hears that a bunch of Chinatown boys have gone missing somewhere deep in the Colorado Rockies she decides to saddle up and head into the wilderness to investigate. Lou fears her particular talents make her better suited to help placate their spirits than ensure they get home alive, but it's the right thing to do, and she's the only one willing to do it.

On the road to a mysterious sanatorium known as Fountain of Youth, Lou will encounter bears, desperate men, a very undead villain, and even stranger challenges. Lou will need every one of her talents and a whole lot of luck to make it home alive…

I'm obviously biased when talking about my own novel, a weird western that has everything but the kitchen sink, so let's Ross do it for me: "Lou is such a fun character, an often grumpy gunslinging ghost hunter with a penchant for cowboy clothes and a habit of wearing her heart on her sleeve. This one has a great sense of place and a supporting cast of characters that you'll likely find yourself shipping for weeks after you finish reading."

An owl hooted as the final sliver of orange sun disappeared below a range of jagged mountain peaks deep within the Colorado Rockies. Several stars were already shining sharply in the moonless sky, and as azure twilight darkened to ultramarine night, their fainter, silver-white cousins also winked awake. Starlight shimmered over black, snow-crusted pine branches and pale aspen boughs as a gust of wind shook the forest.

The owl was not the only creature in the pinewood that evening. After silently diving to clasp her talons around a thin marten bounding across a clearing, she winged her way over a handful of clapboard structures that squatted in the lee of the mountainside on a wide rock shelf just below the treeline. The accumulated snow on the rooftops and windowsills of the small sanatorium might have seemed cozy at yuletide, but it was late into February and thus it merely looked cold, especially when the shutters and doors shuddered in their frames and the torches illuminating the decks and walkways guttered in the wuthering wind.

Shuddering, as well, were a cluster of men and women dressed in white woolen hats, scarves, gloves, and matching uniforms as they attempted a sequence of deep knee-bends and toe-touches in something approximating unison.

"Briskly, briskly!" Undaunted by the elements, a woman with large eyes and larger teeth encouraged her class by demonstrating what she wanted to see. "Down, hold, up! Down, hold, up! You can go a bit lower, Mr. Rutherford, can't you?"

A yes, Miss Foxglove was followed by a low groan as Mr. Rutherford redoubled his efforts.

Mr. Gillis was not the only one having difficulties. The air was so bitter that everyone panted in ragged, choking gasps; the exercise so vigorous that each sweaty face gleamed in the flickering torchlight. No one seemed to be enjoying the calisthenics, nor did they display much enthusiasm when Miss Foxglove clapped twice and announced cheerily that it was time for jumping jacks. After showing them the correct form, her white riding-skirt flapping as she leaped up and down, she bid her class imitate her, and began counting off sets of ten.

"This is terrible," whispered a pretty, auburn-haired girl to her neighbors. The older of the two only nodded his agreement, too winded to speak; the younger and leaner made a noise halfway between a laugh and a cough.

"I hate this shit," he muttered as they paused between sets. He wiped his dark brow with an almost skeletally-thin hand. "Feel like I'll have a heart attack any minute."

"Oh, Mr. Wong!" The young woman was extremely concerned. "If you're not feeling well…"

She trailed off, wincing when another volley of phlegmatic hacking emanated from the darkness several yards outside the exercise area.

"Poor Mr. Gillis," she murmured before noticing Miss Foxglove looking daggers at her.

"Miss Gorey, are you quite ready to continue?" Her tone made it clear there was only one correct answer.

Mr. Rutherford smiled briefly to himself as the young woman bowed her head in contrition, pleased that for once a rebuke was not aimed at him. He quickly sobered as they began another set, and his heavy gut began bouncing and rippling. His wife, also puffing from the effort, pushed a perspiration-soaked lock of greying hair from her damp forehead. When Miss Foxglove allowed everyone a longer break so she could check on the still-coughing Mr. Gillis, Mrs. Rutherford sighed in relief.

"I wish evening calisthenics wasn't required," she said faintly. "Just once I'd like to go to dinner without feeling as though my bowels had been jolted out of my body."

"Given the fare, that's what they're after." Mr. Rutherford mopped his forehead with a handkerchief. "I asked the cook about supper. Salad, of course, and cabbage stew over baked beans."

As they began another set, a round, yellow door set into the mountainside swung open, then shut quietly. Behind the group, a slender figure in a black frock coat and trousers seemed to glide through the night as he strolled along the smooth planks of the boardwalk, his white hands clasped behind his back. He carried no lantern to light his way, but did not stumble.

Miss Foxglove announced it was time for "limberness-enhancement." Busy with retrieving and unfurling their straw mats, none noticed they were observed. The man watched them from the shadows of a juniper thicket. A smile brightened his handsome face when the group sat down, extended their legs perpendicularly, attempting to fold at the waist and grab their toes. When Miss Foxglove reprimanded a nervous-looking woman with a large chest for wearing her corset under her exercise attire, a low chuckle escaped his throat.

"How do you expect to get a full range of motion wearing that thing?" Miss Foxglove shook her head in disbelief, her mouth puckered with prim disapproval. "Mrs. Grosvenor, as I have told you time and again, it is unacceptable to come to class wearing anything that constricts the breath. It may be the fashion outside this sanatorium to mold women's bodies so tightly they faint at the slightest exertion, but we are a modern facility, and as such, believe in healthy living for both sexes. It is 1870, after all, not 1770."

Mrs. Grosvenor opened her mouth, but at the sight of Miss Foxglove's unforgiving frown, she shut it.

"The notion that corsets are healthy for women is as harmful as it is outdated! Women can and should support themselves. It promotes self-confidence, and keeps the spine healthy." Miss Foxglove was really getting into her lecture, waggling her finger at the still-seated, now blue-lipped group. "I am shocked—really shocked! You should all know by now that a trim figure for women and men alike is the result of stimulating the blood by vigorously moving the body, and eating foods which promote optimum digestion and elimination." Miss Foxglove planted her hands on her own slender hips, perhaps to emphasize her point. "I shall suggest to Dr. Panacea that he make corseting the subject of one of his lectures. But for now, let's all lie down and stretch our spines! Roly-polys, everyone!"

The group drew their knees up into their chests and rolled gently from right to left. Miss Foxglove walked among them, praising excellent efforts and correcting when necessary. Unfortunately, the action sent Mr. Gillis into another coughing fit, and he excused himself, staggering away towards the door in the mountain. Though he passed the figure cloaked by the shadows of the juniper, he did not appear to see him.

Still beaming, the man watched Mr. Gillis until the door shut behind him, but when his eyes tracked back to the class his smile wavered. He counted the participants—one, two, three, four, five, six, and Miss Foxglove. Mr. Gillis would have made seven, had he stayed for the entire class, but there should have been an eighth. Concerned, the man shimmered over to where the group was now attempting to arrange their lower bodies into a cross-legged pose Miss Foxglove insisted was much-lauded by Oriental physicians for the purpose of "opening the hips."

"Good evening—good evening to all of you," he replied in a pleasant voice with just a hint of southern drawl. "Ah, how I envy you! If there is anything more salubrious than taking exercise in the brisk air under the starlight I have not discovered it! But I see our class is a bit small tonight. Where is Mr. Woodworth?"

"Mr. Woodworth is unwell," said Miss Foxglove. "I checked on him before we came out, and he said his lungs felt too weak to bear the night air."

"This is the third time this week he's missed calisthenics," said Dr. Panacea, his worried frown every bit as charming as his smile. "I'll go check on him before we all assemble for dinner." He turned, and addressed the rest with such warmth they almost ceased to shiver. "Please, friends, do not allow Mr. Woodworth's indisposition to worry you! My patent medicine, when used in conjunction with cold- and hot-air treatments, is, as you know, the most modern, scientific solution for treating every complaint of body or mind." Dr. Panacea looked around at his acolytes. "It seems as though you have gotten enough cold air for the night… Miss Foxglove, what would you think of dismissing class a little early?"

"Certainly," she said. "Let's clean up, everyone, shall we?"

Stiff and sore, the class rose and began to tidy the exercise area. As they did so, Miss Foxglove stepped off to the side, leaning in for a private word with Dr. Panacea.

"Mr. Woodworth—will he be all right?"

"I fear his condition has continued to decline despite my best efforts." He patted Miss Foxglove on the shoulder. "Sometimes our best is not enough. Yet, lest I miss an opportunity to do some good…"

Dr. Panacea bowed his farewells and retreated. Mrs. Grosvenor watched him go, admiring his figure as he strode purposefully back toward the mountain.

"For all the roughage and the nonsensical jumping about, I'm glad I came," she whispered to Mrs. Rutherford. "Aren't you?"

"Nice?" barked Mr. Rutherford, his spirits improved enough that he gallantly took both his wife's mat and Mrs. Grosvenor's and set them in the crate. "Who cares about nice? Dr. P's a tremendous physician!"

"He's the best," said Miss Foxglove, noting the little bounce in Dr. Panacea's step as he ducked back inside the mountain. "There's no doctor in the world like him."