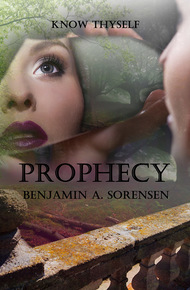 Benjamin A. Sorensen is college graduate and has been, in his time, an ice-cream scooper, a dishwasher, a custodian, and an advertising editor. Despite these defects, he still managed to marry his lovely wife Emily.

He lost portions of his brain when a blood clot in his neck decided to see what life was like on the heights, but still manages to change his children's diapers with something approaching regularity.

Benjamin A. Sorensen is college graduate and has been, in his time, an ice-cream scooper, a dishwasher, a custodian, and an advertising editor. Despite these defects, he still managed to marry his lovely wife Emily.

He lost portions of his brain when a blood clot in his neck decided to see what life was like on the heights, but still manages to change his children's diapers with something approaching regularity.

Prophecy by Benjamin A. Sorensen

When Arana was accused of stealing the great treasure of the kingdom of Kaylar, her innocence was never the question. Her accusers had no great reputation for mercy or understanding.

But her problems are more than simply fleeing from the implacable soldiers of Kaylar. For their treasure was indeed stolen – by a woman who wears her face and form. As her flight takes her ever farther, person after person begins to believe that her death is necessary.

She must find her way in an ever-expanding web of falsehood and truth.

Before she destroys everything.

You know how some moral conflicts are as simple as black and white? In this book, that's more like purple and green. It left me guessing who the villain really was until about three-quarters of the way through . . . in a good way, because I wanted to root for everybody. – Emily Martha Sorensen

She found herself dreaming in a manner unfamiliar to her. The knowledge that she was dreaming permeated her, yet she accepted it without waking. She was in an ornately worked, yet oddly bare room without windows or doors. She turned herself around, seeking an exit, and when she complete her circle she was face to face with herself.

The scent of lilacs filled the air.

"Do you have any idea," her double said with a grin, "how long it's taken me to find you?"

Her double's grin intensified. "It was a rhetorical question. Are you confused?"

"Why are you doing this?"

"The world must be saved."

This answer surprised Arana. She absorbed it, then cast around for another question.

"Only if you oppose me."

"How are you saving the world?"

"There are powers currently on this earth that were never meant for it. Some, unleashed, could mean its destruction. It was in order to put a measure of control on such power that I stole the Dragoncrystal." She opened her hand to reveal an intricately carved jewel that shone with all the colors of the rainbow. Arana could feel its power caressing her face.

"Are you going to destroy it?"

Her double sighed. "Do you want a lie, a half-truth, or the whole truth?"

"It is inescapable. You may learn to catch glimpses of the future as your power extends. You are going to destroy the Dragoncrystal, and that is why I had to steal it."

"Believe what you will. It will ultimately prove irrelevant."

Her double took a step back, then her smile changed to something that troubled Arana. "You're cute when you're angry. But I didn't come here to irritate you." She shrugged. "Perhaps I'll say hello to your brother before I go."

She vanished. Arana had no idea how to follow her. Soon, true sleep washed over her. But when she awoke the next morning, portions of Jard's mind seemed blurred by violet. And the first thing he said was, "That's the first time in a long while I can remember sleeping."

To disguise her apprehension, she shrugged and said, "You've slept lots of times."

"But I remember it," he said. "I'm aware that I've slept. For the longest time, that hasn't happened. I know I dreamed."

He shrugged. "I know I dreamed. I don't remember what they were. But they seemed pleasant enough."

His words were true. She could tell that much. But she could not see past the violet curling its way through some of his thoughts, welling in scattered feelings. She had not realized how natural her power had seemed to her until now, when she found herself limited. "I don't trust her," she said to Jard.

"Who?" Jard's confusion was also unfeigned. "Which 'her' are we talking about?"

Arana shook her head. "Nothing. Never mind. We had better get going."

She trudged in silence and labored fruitlessly to understand and penetrate whatever power had been left in Jard's mind. And she could detect no harm or malice in him other than those parts he kept hidden from even himself. For all she could tell, her double's intent had not been harmful. Which indirectly lent support to her words concerning Arana.

But why would I destroy it? The last thing I want is a war.

There was no answer to the question.

One night, as they were about to traverse the mountains proper, she dreamed. She recognized the same room as before. "What now?" she asked wearily, not even turning to look at her double.

"Is this all the more distance you've covered? You'll never reach Lynk at this rate."

Fallthren had said as much. "What did you do to Jard?"

Her double walked into view. "Your unapproachable stubborness is one of those qualities which makes the fate of the world so uncertain. Jard won't be of use to anyone until he comes to terms with himself, so I laid some groundwork to help him realize what his problem is." She shrugged. "Hopefully, it will work. But we've strayed from the topic at hand. You need to hurry."

"Because we'll all die of old age while you wander in these mountains." Her double's eyes sparkled with mirth. "Hurry to Lynk, or else we may all die of something else a lot sooner. There's a wizard there named Dalen, as well as that funny old man – Telas, wasn't it? They're both looking for the Dragoncrystal, and may help you catch up with me."

"If I'm going to destroy the Dragoncystal, why would you want me to?"

"Are you saying you believe what I told you?"

"I am saying," Arana returned, "that I am willing to consider the possibility."

"Unfortunately, the only way you will know the truth is to come find me. And the fact that you have to know the truth is an unfortunate byproduct of that stubborness I mentioned earlier. But I'm leaving Nabd when this winter ends. It would be wise not to delay too long. Find some way to hurry to Lynk, or else you'll get lost trying to find me. I don't think either of us wants that."

She smiled, blew another kiss at Arana, and vanished.