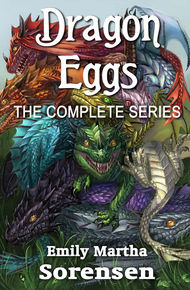 Rose didn't count on becoming a mother to a brand new baby dragon egg. She's always wanted to be a paleontologist, and is now in college studying to become one. But a chance meeting at the American Musuem of Natural History turns her world upside down. Because, millions of years after dragons have gone extinct, there's an egg that seems to be unexpectedly . . . alive.

The egg knows what he wants. He wants Rose and a stranger, Henry, to be his new parents. But can three strangers of two different species become a family?

I think the world needs more fantasy books with main characters who are parents with small children. So I wrote one. I think many of my personal experiences about raising small children with autism have informed the challenges the main characters of this story face in raising a baby dragon. – Emily Martha Sorensen

He staggered off to the bedroom, leaving her alone with the dragon. Their son, the dragon.

"Hey, Virgil?" Rose said quietly. "Thank you for choosing us."

A scaly face with yellow eyes looked up at her.

Virgil was glad he'd chosen them, too. Even though they looked strange. And they didn't feed him real food.

Rose hesitated, because she wasn't prone to bursts of affection, and then leaned forward and kissed the top of the tiny dragon's head.

Virgil paused in his eating. Why had his mother done that? There was no food on his head.

"It's a way that humans show affection," Rose said. "I'm getting used to you."

Rose got up and went to the kitchen, where she found the bowl Henry had mentioned. She scooped some of the contents into her hand and walked back to the living room, where the dragon was digging into the carpet with his curved back claws.

Virgil was hungry. Virgil didn't know what a carpet was. Where was Virgil's food?

She bent down and gave it to him. While the dragon was eating, she checked the thick cloth they had wrapped around his nether regions. It was, unfortunately, sopping wet.

Once he was asleep, she got up and walked to the kitchen, where she found a replacement small towel in a bottom drawer. Then she clumsily undid the safety pins and wrapped the new towel around his bottom and the top part of his tail. She carefully fastened the safety pins back again.

Rose breathed out a sigh of relief.

I can do this.

She stood up and took the disgusting, soaked towel to the kitchen, where she proceeded to wash it with soap in the sink. Then she wrung it out and hung it to dry over the top of a lower cabinet door.

She walked back to the living room, where Virgil lay curled up with his tail around him. His snout wriggled as his curved back claws attacked the carpet.

I can do this, Rose thought.

She sat down, intending to start on her homework, and then Virgil raised his head and looked at her.

I hope I can do this, Rose thought with a sigh, returning to the kitchen to get him more chicken.