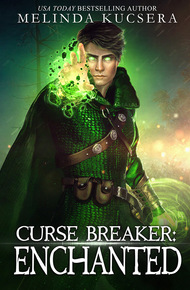 Melinda Kucsera writes fantastic short stories, novels, and books when not being kidnapped by dragons or chased by armies of fictional creatures. (We do, on occasion, rescue her.) She leaves the running of her newsletter to a cast of lovable characters who hog her inbox.

Enough about her, it's us you're interested in, her cast of characters. Join us every week for a new story at www.mkucsera.com/welcomecharacters. Let us take over your inbox. We promise to behave.

Start No Fires. Carry No Weapons. Do No Harm. Those three rules safeguarded countless travelers through the enchanted forest—until they didn't. One boy's murder ripped open a hole in the forest's ancient protections. Now, no one is safe. But that dead child was born to wield magic, and he wants justice from the nearest mage—a young man named Sarn.

Finding answers won't be easy. Not when the killer will do anything to stop Sarn, even summon monsters and turn the enchanted trees against him. Now, the forest needs Sarn's help, but that's not a choice Sarn can make.

When his commander demands he abandon his quest, Sarn faces an impossible choice. If he disobeys orders, he'll die from the backlash of breaking his word. But if he doesn't stop the killer, his son will pay the ultimate price.GetCurse Breaker: Enchanted* now.

*This is the More Epic Version, Revised.

I met Melinda Kucsera through the magic of the Internet when L.C. Ireland and I accepted her novella into our A Different Kind of Hero anthology. I've been impressed with her work ethic and dedication to the fantasy world she's built. I really like that she's telling a story about a protagonist with PTSD, because I've found that protagonists with mental illnesses are often ignored in fantasy. – Emily Martha Sorensen

"Sorry," Sarn said as he collided with someone burlier than he was. The unlucky passerby struck the magical field that always surrounded him and hopefully bounced harmlessly off it.

But Sarn couldn't stop and check. If he did, someone might see his green-glowing eyes and report him. Magic was illegal, and he had far too much of it running around inside his too-tall body. Enough to warrant the death penalty if anyone in power ever found out.

Delve down deep. Delve into the roots of the mountain, urged the magic sharing his skin.

"Why?" Sarn asked his magic without breaking stride. He had to reach his master before the next bell rang or else. Sarn checked the map scrolling across the back of his eyelids, seeking a convenient gap, but saw only a thousand—

Nine-hundred and nine, snapped his magic after performing a quick count of the people icons crowding his head map, which it maintained.

"Whatever," Sarn shot back. There were way too many people between him and his goal, forcing Sarn to slow down, so he didn't mow down everyone in his path. "Why do you want me to go downstairs? My family's down there. Are they in trouble?" Fear gripped Sarn as he patted the bodies ahead of him, searching for a way through.

The Litherians—his magic said as if the name of that long-vanished race explained anything. But his magic seemed to think it did.

"Not that again." Sarn shook his head. The Litherians were a bunch of stone mages who'd carved out a city inside the cone of a mountain, and their statuary fixation complicated his commute.

Sarn cursed at a wall of bodies, halting his progress. They funneled through a narrow gap between two giant statues ahead. At least that's what the icons on his map said they were doing.

While he waited for the crowd to move, he might as well find out why his magic cared about the builders of this place. "Why are you interested in the Litherians? They've been dead for centuries."

You could find out what happened to them, his magic taunted, but it didn't offer a reason for Sarn to care.

The Litherians likely lost their way in the maze they'd left behind and starved to death. But Sarn didn't feel like arguing with his magic anymore, so he kept his theory to himself. He needed to get to work, not search the bowels of the mountain for clues about a legendary race of dead mages.

Besides, someone might hear him talk to himself and get the wrong idea. Sarn felt a break in the crowd ahead and squeezed through it, only to walk into another man. "Sorry, sorry," Sarn hurriedly apologized, but the crowd still hadn't moved. What was the holdup now?

Sarn ignored it as another gap opened to his left. He slipped through it, but only gained a couple more feet toward his goal. Damn, this was taking too long. More grumbling accompanied Sarn. It was likely the same warning again. His magic liked to repeat itself until he gave in to its demands or something distracted it.

"What do you want me to do?" Sarn asked his magic when its grumbling continued. It was a low but insistent drone sawing on his last nerve. Sarn didn't care if the people he squeezed past heard him talk to his magic. He just wanted it to shut up, so he could concentrate on locating his master before the next bell rang. "I can't just drop everything to find the unnatural thing upsetting you. I have somewhere I have to be."

His magic didn't care about the oaths he'd sworn until it had to enforce them, and it would if he didn't hurry. His overactive magical gift pressed against his closed eyes, begging for release. Well, he'd show it who was boss. Sarn pushed his magic down while he felt for a way past the bodies in front of him, but his hands just encountered more people, and none of them were moving—double damn.

Unnatural! His magic pulled at him, knocking Sarn off balance.

The ground trembled, and nine-hundred people panicked. Okay, fine, nine-hundred and nine, Sarn corrected himself when his magic protested. It didn't like inaccuracies of any sort.

Shouts of "earthquake" finally motivated the crowd to move. They shoved past, jostling Sarn in their haste to exit this tunnel.

If this was an earthquake, then he had to go back. I must save… Sarn slammed into one of those damned statues before that fearful thought could complete. Those oversized marble annoyances were everywhere he turned, surrounding him. His cloak caught on one, and Sarn tugged it free. Had he wandered into an installation? He must have because stone-cold hands brushed across his burning eyes and the magic fighting to escape his hold, and that power ignited a fierce green blaze inside him.

Let us out! His magic pushed against his eyes, opening them as Sarn stumbled into the cold, hard arms of another statue, and they closed around him.

A slice of white marble slashed across the emerald glow, wreathing a sea of heads. "No!" Sarn squeezed his eyes closed and tried to slip out of the statue's grasp, but its hand squeezed his arm. "No." Sarn had to get away. I must save… that thought cut off as his awareness winnowed away. It shrank down to the stone hand, grabbing his hand as his knees buckled.

Where the hell were his damned gloves? Sarn had promised to wear them all the time. Why hadn't he put them on?

Let us out, begged his magic as Sarn slid away.

His awareness seeped out of his ungloved hand into the statue holding him, then into Mount Eredren itself, and finally beyond it to the darkness reeling Sarn in as a dozen voices repeated five unintelligible syllables—eam'meye erator. They hammered a warning into his fading consciousness.

Wrong, wrong, wrong! shouted his magic right in his ear as the world blackened and silence fell. But Sarn still didn't know what was so wrong.