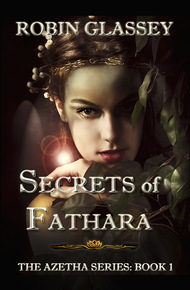 Robin grew up in a small town in Eastern Canada across the bay from a leaky nuclear power plant. While radioactivity hasn't given her superpowers, it has turned her into a human EMP who might just usher in the apocalypse. (If you value your data, don't let her touch your computer.) Robin was raised on a fantasy and fiction diet, including Star Wars, Star Trek, and Doctor Who.

Robin graduated with a degree in Psychology at BYU and now spends her time analyzing her four boys, converting people to Doctor Who, and writing clean YA fantasy. In Robin's epic fantasy series, The Azetha Series, she transports readers to a world of sorcery, secrets, and strange creatures. Although Robin writes about epic journeys, if she ever went on one, she'd most likely die within the first mile.

Secrets of Fathara by Robin Glassey

A princess, a sorcerer, a secret. While sixteen-year-old Princess Tika has all the trappings of a princess, the misfit teen who can see and talk to faeries is trapped by the stuffy life of a royal and her father's expectations of perfection. What would His Majesty say if she told him she can see and talk to Death? Tika fears the worst thing looming on her horizon is a loveless marriage arranged by her father and vindictive aunt, but when tragedy strikes the castle, the first of many secrets are revealed and marriage becomes the least of Tika's worries.

As a result, traitors insidiously infiltrate the castle, the royal guard, even Tika's own family and she is stripped of the only home and family she's ever known, forcing her to go on the run. And while the pseudo princess learns more about her true heritage and unique gifts this heritage bestows on her, she's hunted by an evil sorcerer's assassins and his living and undead creatures of forbidden dark magic. Now the life of stuffy gowns and boring balls Tika so desperately wanted to escape, she desperately wishes she could have back.

Epic YA fantasy author Robin Glassey transports readers to Fathara where Death walks the land with a happy grin, having a conversation with the Intelligences is a sign of madness, and where an encounter with a Sha'andari is hazardous to your health.

I met Robin Glassey at Life, the Universe, and Everything, a symposium on science fiction and fantasy that I've attended every year since 2002 and often spoken at. She was a fellow panelist at the time. You know how it is when you take an immediate liking to someone? That's how it was when I met her. I knew I wanted her to be part of the bundle as soon as I set it up. – Emily Martha Sorensen

Sha'Chivok raised a frozen hand to the prison door and hesitated briefly. Before he could knock on the frosted barrier in front of him, Mortan called out irritably, "Enter!"

Bracing himself for the inevitable confrontation with the ancient Elf, the frozen Water Elemental turned the handle and entered the room deep in the heart of Castle Simmai, located in the northern reaches of Gor Vodi. Of all the places in Fathara, this was the perfect place for Mortan to plot and plan, experiment and expand.

Sha'Chivok was not privy to all of his master's plans. None of the Sha'andari, of which Sha'Chivok had been the first, knew all of Mortan's plans (for the Elf trusted no one). And yet Mortan promised them so much: power, magic, and immortality. The sorcerer had made Sha'Chivok glorious promises, grand promises. In truth, immortality was nothing to an Elemental. Sha'Chivok could choose to live forever if he wished, yet his power and magic were still limited compared to what Mortan now wielded. The sorcerer's promises were tempting for an Elemental who had endured much—so tempting.

Sha'Chivok resisted the urge to look down at the gaping hole burned clear through the center of his stomach. His fluid nature could shift the scar, but why bother? He couldn't make it disappear, only move its position. Only Elemental magic could damage him so. It reminded him of his carelessness in the past. Carelessness in the future would mean more than an inconvenient hole; it would mean his death.

Mortan wore his red robe with gold trim down the front today (never a good sign). On the thick gold trim were woven several magical symbols to amplify Mortan's power. The Sha'andari often wondered how many rubies it had taken to cover the robe.

In contrast to the blood-red robe, Mortan's chalk-white face and midnight hair stood out. At his advanced age, the Elf's hair should have turned silver, but Sha'Chivok suspected the sorcerer used alternative means to keep his original color. It was unlike an Elf to show such vanity—such weakness. There were some signs of the Elf's age such as paper-thin skin and a few wrinkles around the eyes and the corners of his lips. Other than a few wrinkles, though, Mortan's skin remained incredibly smooth for one so old. Sha'Chivok suspected there were more signs of his age that the sorcerer kept carefully hidden using magic.

In the center of the room, suspended in mid-air by a globe of green light, hung a forest windah. The small wooden creature had clearly been tortured for some time as his bark lay in peels—scattered around on the icy floor below him. Slivers and chunks of wood also lay around the room, yet Mortan held no mortal weapon in his hands. Sap oozed slowly from several places of the windah's body, including the corners of his tiny brown eyes. His head slumped forward with thin twigs sticking out of the top of his head like spiky hair. One solitary green leaf remained on a twig—sticking straight up—as if in defiance of the brutal torture being delivered. The windah's arms stretched out painfully up and to the sides with his tiny wooden legs dangling uselessly below him.

Sha'Chivok suppressed a shudder at the sight as he pictured himself possibly hanging there, with chunk after chunk of ice ripped off his body. It might happen after he gave Mortan his report. The Elemental forced his eyes away from the tortured creature in the middle of the room and waited for his master to address him.

"Tell Us what Lindra's plan is, and all this can stop," Mortan commanded, in a voice that sounded like rushing water.

Sha'Chivok had grown accustomed to Mortan's strange way of speaking. The Elemental knew the "Us" did not mean Mortan and Sha'Chivok but rather the sorcerer alone. Mortan was the only Elf Sha'Chivok knew of who spoke in this manner, and he was certainly not going to correct the sorcerer. Sha'Chivok remembered when Mortan used to call himself I; however, that had been centuries ago when Mortan's eyes were silver, not red. It would be folly to bring attention to the Elf's odd speech. Every so often, Mortan seemed his old self before the darkness overcame him, although those moments were rare and occurred less and less as time went by.

The windah who hung suspended in the room was also in no position to correct Mortan. He merely grunted in reply to Mortan's question and was rewarded with a flick of the sorcerer's right index finger. A chunk of wood flew off the creature, ricocheting off the cell wall. Straining against the green magical bonds, the windah gave a high-pitched squeal of pain.

Sha'Chivok doubted it really mattered what question Mortan asked. (In truth, he could have asked what the windah had eaten for breakfast.) The Elf was making no headway in his questioning, for it appeared these little creatures would not break under torture, no matter what the drovers, zhobani, or Mortan himself did to them.

Without even glancing his way, Mortan addressed Sha'Chivok brusquely, "What have you to report?" Another flick of the finger sent an even bigger chunk flying off the windah's stomach. He howled in pain, straining against the magical bonds, but his mouth quickly clamped down and his tiny eyes glared at Mortan in obvious hatred.

Sha'Chivok was grateful to not have Mortan's direct gaze on him. The Elf's unnatural blood red eyes with shifting black specks unsettled even the bravest of souls. The Elemental shifted his gaze to a point on the wall beyond the defiant windah.

"The search for the child of the prophecy continues, Master. We've narrowed our focus to the Kingdom of Rhodea, as it contains the most unregulated use of magic. Finding Azetha remains difficult, however, as the land is full of Keepers. The use of magic within the cities and villages is constant, making it difficult to narrow down the child's identity."

Sha'Chivok's eyes flickered briefly over to his master, and then back to the spot on the wall. "If there was something more you could provide that would help identify Azetha . . ."

Mortan's full gaze turned on the frozen Elemental and Sha'Chivok cut off his sentence before finishing it. The intense dark red eyes made Sha'Chivok feel as though his insides boiled, screaming for escape into the air and away from his master's scrutiny. He forced his icy feet to remain still, and wait.

After a painful pause, the Elf bit out, "Azetha has eluded you and the rest of the Sha'andari for sixteen years. Those who want the rewards must do the work. It is past time you found the child, Sha'Chivok."

"See that you do not. We do not look kindly on failure." Mortan gestured at the windah who gave a final weak cry and slumped in his bonds.

Sha'Chivok took it as a dismissal and turned to leave the prison room. He grimaced at Mortan's next words.

"What do you know about the nature of windah?"

"We torture them to death, and yet they refuse to answer Our questions, no matter how simple," said Mortan, with what sounded like a hint of frustration leaking into his tone.

"Windah are fiercely loyal creatures. If they believe you mean someone or something harm they won't cooperate, no matter what you do to them," explained Sha'Chivok.

"Even when We try to manipulate their minds, they remain uncooperative."

Sha'Chivok gave an apologetic shrug of his shoulders. "Windah are simple creatures, and perhaps that's why mind manipulation doesn't work. You can't force your way into their memories like you can with Humans, Elves, and other more complex creatures."

If Sha'Chivok had a tongue he would have bit it. Instead, he froze even harder, crackling slightly from the pressure of it. He shouldn't have equated Humans with Elves. Mortan's long-standing hatred of Humans was legendary. It was at the heart of the ancient Elf's war against the Humans and the rest of Elfdom.

If Mortan heard him, however, he chose to ignore the comment. The ancient Elf was obviously lost in thought, tapping a long white finger against thin lips. He muttered to himself, "We believe they are using the windah for something . . . for what?"

The Elf looked up. "Why are you still here? Find the child. Listen and look for anything out of the ordinary. The Humans today do not trust magic. They try to get rid of anything magical. The stupid beasts in Travanne do not even realize the prayers they say are really magical spells." This produced a sharp bark of laughter from the black-haired Elf. Sha'Chivok left the cold room taking rapid strides, relieved he'd been spared for the moment. The windah proved distraction enough this time. As he left, however, he heard his master order a drover to clean up the room and prepare another windah for questioning. This time Sha'Chivok shivered, but not from the cold. He had to find Azetha before the other Sha'andari. His very existence depended on it.