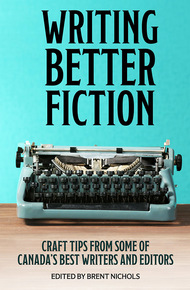 Brent Nichols writes science fiction, fantasy, and crime novels. He's been nominated twice for an Aurora Award for Best Novel, and his stories appear in several Aurora-winning anthologies. He has novels with Bundoran Press and Seventh Terrace, and a wide selection of self-published work. For Writing Better Fiction he recruited some of the best writers and editors in Canada, from novelists to poets, magazine editors to book coaches. Among them they have qualifications and awards ranging from university professorships to Aurora, Nebula, and Hugo awards.

The 26 writers and editors—and one writing group—who contributed to this book know exactly how difficult it can be. They've seen the challenges and found the solutions, and they are here to share their hard-won lessons with you. From getting started to choosing a point of view, to adding resonance, crafting an unforgettable villain, advanced editing techniques, and more, Writing Better Fiction has something for writers at every level.

I don't write horror, but I understand it well enough. I regularly face the horror of the blank page, and while I'll concede there are worse things out there, the blank page, the flashing cursor, the maddening swathe of empty pixels waiting to be filled with words, is quite bad enough.

I don't know where you're at in your journey as a writer. You might be at the beginning, wanting to write and not sure how to begin. You might be a seasoned veteran with so many books published you've lost count. If you're in the first group, you probably think the second group has it made. They don't have to deal with all this fear and self-doubt, right?

Excuse me a moment while I have a good belly laugh. I'm sorry to tell you that the fear persists. You get better at dealing with it, but it never quite goes away.

Writing can be terrifying. Your house may never be cleaner than during the first few days of a new writing project. Procrastination has tremendous allure when the alternative is the dread of the blank page. Because writing is important. If you're like me it's a long-cherished dream, and the thought of failing at something so significant is debilitating. It's paralyzing, because so long as you don't actually touch that keyboard, the dream will live.

But you're made of sterner stuff than those lily-livered posers who talk about the book they always wanted to write but never got around to. You're going to plunk yourself down in front of the keyboard and write something, and I'm going to help you get started.

Here's the key: write badly. Write as badly as you need to. Yes, I know, you want to get it right. You want to craft beautiful prose. You want your manuscript to be riveting, absorbing, and flawless. You want every line to sparkle.

And some of them will. You'll startle yourself with your own brilliance sometimes, as you watch the words appear on the screen. Other lines will gain their sparkle when you edit. But only if you write them first. That glorious moment, when you read your own words and realize you've made something truly beautiful? That moment doesn't happen to people who stare at the keyboard, frozen, searching for the perfect first word.

Maybe it's not the blank screen that stops you short. Lots of people get bogged down on the first chapter, or page, or paragraph, and never get past it because they can't get it quite right. Or even marginally acceptable. It makes sense on the face of it to stop when you've just written something that truly stinks. Obviously it needs to be fixed, and there's no time like the present, right?

The best way to write a good first chapter is to write the entire book, and then go back and tweak the beginning. That's when you'll know your story, your characters, and the nuances of your theme. You'll know exactly what kind of kick-ass ending the rest of the book should be building toward. There's an excellent chance you'll throw away the original first chapter and write a new one, one that's more relevant, one that's much stronger than anything you could have come up with before you had the rest of the book to give you context.

How sad it would be if you never reached that moment of insight because you wanted to get your disposable first chapter perfect.

Your first chapter, page, paragraph, your opening line, will be brilliant. Eventually. Just maybe not on the day you first write them. There's a flash of inspiration waiting for you. The only way to reach it is to give yourself permission to write badly. To quote a writers' cliché, you can fix bad writing. You can't fix an empty page.

Your nerves might not be up to the challenge of tackling your dream project. It comes with too much emotional baggage, and it's bogging you down. That's okay. You don't have to work on it right now. But you still have to write. When the important stuff is too scary to face, write something that doesn't matter.

Don't get me wrong. It matters, but it matters the way that going to school matters. Getting an education is important, but there's nothing frightening about one more history class. When you don't want the stress of working on your career-defining Great Novel, build your skills. Like an athlete who practices between competitions, you need to work at your craft. And who knows? The things you write "just for practice" might turn into the foundation of your career.

Write. Write lots. Write regularly. Start out by writing what you like, but eventually, stretch your writing muscles by venturing outside your comfort zone.

Tackle the kinds of things you think you don't know how to write. Write something funny. Something surreal. Something so dirty you start breathing heavy when you try to edit it. No one else has to see it, but you should write at least one thing that would shock your friends and family if they knew.

Mimic another writer. Not as a career choice; as an exercise. Write a short story, or a chapter or a page, in the clipped world-weary style of Dashiell Hammett or the florid, lavish prose of Anne Rice.

Read lots. Read what you like, and read stuff you don't like. You know those entire sections of the bookstore that you skip right over? It's time to head in there and pick something.

Read really good fiction, and read some bad stuff as well. If you only read traditionally published books, you only see curated, edited writing. Filtered, in other words, and you miss the lessons that live in the detritus that gets filtered out.

It's when you read bad fiction that you see real gold, in an educational if not a literary sense. The same mistakes appear over and over. That's when you'll start to recognize those mistakes in your own writing, and you'll figure out how to fix them. Then there are the spectacularly original mistakes, which, if they lack pedagogical value, are at least good for a laugh.

You'll also see good stuff, of course. Brilliant storytelling, in some cases. Traditional publishing is not entirely a meritocracy. But mostly you'll find a mix of complete garbage and stuff that almost works, but somehow falls short. Figuring out what's wrong with a subtly flawed story is an absolute treasure trove of learning for a writer.

Reading fiction that's worse than yours will help you internalize a key fact: you're on a continuum, and you always will be. There are writers who are better than you, and writers who are worse.

You need hubris to survive in this game. You have to believe the world needs to hear what you have to say, that you can create something brilliant, that the whispering (sometimes shouting) voice of self-doubt can be safely ignored, or you'll never write a word. And yet you need humility as well, or you'll never learn or grow.

Writers need thick skins. You'll get terrible feedback. People will hate what you've written. Take a moment to absorb that concept, now while it's abstract, while you don't have an emotional investment in a particular story. That tale you haven't even thought up yet? When you finish writing it, someone is going to loathe it. And that's okay.

An essential skill, and one you'll be a long time mastering, is figuring out whom to listen to. You need feedback, and good feedback can be priceless. Your manuscript will have problems you'll be oblivious to, and an outside perspective will help you see them.

Not all feedback is created equal, however. Readers will contradict one another. They'll give you dreadful advice. With earnest enthusiasm and the best of intentions they'll lead you up blind alleys and into pungent, murky swamps of cliché and melodrama. Sometimes the greatest lesson you'll get from a beta reader is that you need a new beta reader.

Then there are the editors and the reading public. Sooner or later you'll have to stand before the harsh lights of public scrutiny and expose your prose. Not sure if you're ready for this step? Make the leap anyway. Let the editors do the rejecting, if that's their inclination. Don't do the rejecting for them.

Nearly as insidious as the blank page is the allure of endless editing. Don't work the life out of your story, and don't rob yourself of all the stories you might have written if you weren't obsessively re-hashing something that was finished months or years ago. Editing has its place, but it's a small place. A bachelor pad, not a sprawling mansion. Write something new.

That story you've reluctantly stopped editing? Don't sit on it. Put your work out there. Submit to contests, magazines, anthologies, whatever. Self-publish. Then, forget about it. The story will do well, or it won't. Once it's submitted, let it go. Excellent stories get rejected for all sorts of silly reasons, and you need to not have an emotional investment. Your attention must be on the next thing you're writing, not the last thing you wrote months ago.

The best part of getting past the blank page, of course, is that it's fun. Writing can be the greatest job in the world. You get to make up entire worlds, you get to create something out of nothing. You get to have an impact on people you'll never meet. You may change the way people see the world, decades after you're gone. Staring at a blank page sucks, which is the best reason of all to move on to the good part. Once you overcome the minor hurdle of utter terror, you get to write!