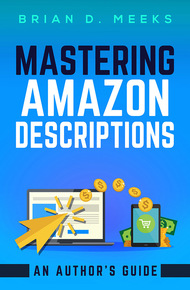 Brian D. Meeks is a former data analyst turned novelist. He makes his living as an author, speaker, and coach, working with people to help them achieve their dream of becoming a full-time author. He's written 19 novels and 6 non-fiction books, including Mastering Amazon Descriptions, which is the art of getting people to want to read your book.

It won't hook the potential readers.

To get them interested in your book, you must hint at what might happen, dangle a bit of intrigue, and then ask them to buy. It sounds simple, but it takes practice.

This book will show you the way.

Okay, the fact that you're here, in chapter 3, means you've earned twenty points.

You also earned ten points just for buying the book. Writing descriptions is awful. You hate it. I used to hate it. Some have called the need to write descriptions a war crime. Why can't the readers just judge my book by its awesome cover?

I know of what I speak. For I, too, hated writing descriptions before I heard a chorus of angels tell me that learning copywriting was the way forward. (Note: It might have been that I was listening to a Slovenian choir do their version of Africa by Toto on YouTube, but the point is the same… I saw the light.)

I once put off launching a book for six weeks because of the description. Every day, I would say to myself, "Okay, just bang out a three-hundred-word synopsis and be done with it." Then I would eat bacon, play a video game, and take a nap. Admittedly, it was a GREAT six weeks.

When I finally put up the synopsis, it was horrible. But I didn't care. It was done.

A year later, I decided to do the unthinkable. I would learn copywriting. I expected it would be like eating peas, or going to the DMV (twice), or dying by bear mauling after an ill-advised woodland cuddle attempt. It turns out, it was sort of awesome.

But I didn't know that right away.

It wasn't until I saw the data that I was, in the words of a teenager, "Totally, like, you know, totally… you know… happy."

Once I saw my new conversion rate, I went back and estimated how much money I'd left on the table. I looked at the twelve months prior. I had all the clicks. I knew what "would have" happened if I had made the change then, and the number was staggering. In twelve months, I would have earned an additional $60,000 in revenue with proper copywriting.

I told this story in my other book. And I'll say it again: "Don't cry for me Argentina." I'm an optimist, and when I saw that number my first thought was, Whew! I'm glad I didn't wait another year.

You see, mindset is important.

There's an old adage that goes, "Don't cry over spilled vodka." I think it was said by a Russian man who actually had another bottle in the cupboard and one hidden in the barn for good measure. So we don't know if he would have cried at spilling his last bottle. I digress.

The calendar is your extra bottles of vodka. Go ahead, turn the page. There's another month just waiting for you. It's better to look forward to that month and the extra sales than to spend time going back to the old months and lamenting opportunity lost.

Throw out the old calendar, unless it has pictures of guinea pigs competing in Olympic-style events. Guinea pigs are adorable.

You're going to need to think differently about your book.

This will be the hardest thing to change when you first start writing your descriptions. You'll want to write a synopsis. You'll want to tell the potential reader all the yummy goodness contained within the pages.

Why buy the book if you already told them what happens?

"But Brian, that's what everybody does. They can't all be wrong, can they?"

When I first started to change out my descriptions, they were converting at 1:30 (reads one-in-thirty). That means that 29 people were NOT buying my book. When I made the change, it dropped immediately to 1:10 – 1:12.

It should be noted that when I was making these changes, I was getting a high volume of clicks per day, so the results were easy to see.

If you're not getting too many clicks through your advertising venue of choice, then it may take a while to have enough data to see the results.

This brings me to my first WARNING!

WARNING: Do not change your description, look at the next day's sales, see they've dropped (which could happen for a number of reasons unrelated to the description) and panic. Do not panic.

"But how could the sales drop if the new description is so good? Are you messing with me?"

If your books don't sell in great numbers from one day to the next, then it's important to understand how much variance you have for your book. Look at the sales over the previous 90 days. Calculate a 15-day moving average. Note the high days and low days. Were there any promotions?

Don't worry—I'm going to explain what all of those things mean and how to use them.

This is IMPORTANT. You need to do the math, both before and after the change. This is NOT something you can eyeball, and you may not get it right on your first try… but you might.

I don't want you to give up on a description too early. Variance can be a cruel mistress.

This may seem like I'm beating a deceased equine, but I need to convince you that all of this math stuff matters.

Some of the "number of reasons" there might be a drop in sales include:

1.The day before, you randomly had a spike due to organic traffic.

Okay, the last one may be tough for me to prove, but let's take a look at variance.

Variance can cause data to look better than it is or worse than reality. It works both ways. I have a perfect example.

Before I learned copywriting, my books converted at 1:30 with one at 1:35. On one of the books, I had an ad that only got 5 clicks. The AMS report told me there were 5 sales. (If you know me, you'll know I rail against the inaccuracy of the AMS report and that it is NEVER to be believed, but I've not found any instances where it over-reported. Thus, I believe the five sales)

Now, if you do the math, it should take 150 clicks to get 5 sales. Of course, that's based upon a 1:30 number that is made up of many thousands of clicks to analyze. In a short period, like the example, with five clicks, it is mathematically possible to get five readers in a row who want to buy the book.

It is also possible to go zero for one hundred or worse.

I'm sure that if the ad had continued to run, there would have been many more clicks without sales, so the 1:1 conversion rate would have plummeted.

The important point is that it happened and that it's really unlikely.

2.5 million to one against a one-in-thirty proposition coming in five times in a row. Yes, I live in Las Vegas and may have busted out some gambler talk. The important thing is that I'll need another 2.5 million ads to realistically have a shot at going 5 for 5 again. And even then, because of variance, it could be 5 million. I could look at the ads of every author I know, for the next hundred years, and still never see 5 for 5.

And yet it happened.

If you don't have a lot of data, you can't draw conclusions.