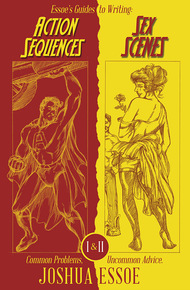 ​He has edited for bestsellers, Piers Anthony and David Farland, including the multi-award-winning novel, Nightingale. He's edited for Dean Lorey, lead writer of Arrested Development, Mark Leslie Lefebvre, former director at Kobo, numerous Writers of the Future winners, USA Today bestsellers, and many other top-notch independents.

​You can find Joshua teaching about pitches, back cover copy, and editing every year at the Superstars Writing Seminars in CO. His approach to editing is to help you make your story the best version of itself it can be.

The first in a five-book series, each covering two subjects of the most-common issues I see in fiction writing as a full-time editor. Whether you're an adept or a neophyte, this book will help you to write better action. Which kind of pow, bang, and boom we're talking about is up to you!

Action Sequences is divided into 8 easy-to-access dilemmas that I most often see plaguing action scenes, like emotional penetration, research, setting and blocking, and melodramatics. Each section offers a deep dive with examples into the subject matter, plus a bunch of sidebar Pro Tips and exercises for extra info and practice.

Sex Scenes delves into the multitude of complex and difficult aspects of writing sex scenes in fiction. I go into detail on if and when you should include a sex scene, how far you should go, what a sex scene should do for your story, and most importantly, what it should do for your characters. I go through the most common mistakes I see and how to fix them, and even include a list of words you should probably put on your no-fly list. In the margins you'll find more Pro Tips and exercises to get you through.

Fight scenes represent an opportunity unique to the rest of your storytelling to get your reader's nerves tingling, and heart thumping. They are an opportunity to reveal things about your characters and about your conflict that can't be revealed in other ways. But they're a gamble.

Giving an exhaustive account of every People's Elbow dropped, every blaster fired, or every parry Andúril makes is boring. A meticulously faithful depiction of move and counter move of

For a fight scene to work, it is vital that readers sympathize with your viewpoint character (VC), who is usually (but not always) the protagonist. There are many tried and true ways to create sympathy, that is, emotional connection and engagement. The VC may be fighting for another or for a cause, they may be fighting for honor, or for a principle. The protagonist might also be in pain we can relate to, or emotional turmoil readers are likely to have felt themselves or can imagine feeling. Sometimes readers latch onto a protagonist simply because they have some cool power or skill or tech or pet, and sometimes, if you're really adept, the action itself is so filled with uncertainty that readers just have to find out how it ends. I think an experienced author combines several of those elements into the narrative to establish not only the emotional connection, but also the stakes in the fight scene before it begins.

Setting and blocking are also vital at this point, but we'll talk about those in Dilemma #3, below. Decide what emotions you want to stoke in your readers with your action scene and use those as your foundation. Do you want wonder, like at the mashup boss fight at the end of Ready Player One? Desperation like the hobbits' fight with the ring wraiths on Weathertop? Shock and a bit of sick humor like Joe's fight with himself in front of the manager of the Pressman Hotel in Fight Club?

How might you portray humiliation, grace, vengeance, justice, redemption, or madness? Hone your skills not as a writer so much as a storyteller to arouse those emotions. None of the above examples were just fights. They all revealed things about the characters fighting.

An action scene should always improve characterization. When you are writing your action scene, be it a chase through the woods pursued by ringwraiths, flying around the planet to turn back time and save the heroine, or a fateful duel in which the old mentor dies (and becomes more powerful than you can possibly imagine), you must keep the motivations, feelings, and nature of your VC front and center.

Let's talk about fight scenes—they're what most of us default to when we think about action scenes.

In everyday life it actually takes quite a lot of provocation to spur your average person to violence. A fight scene is always more interesting when it is born out of what's going on inside the character. The why of it is more important to the story than the specific details of every move made.

Writing a sex scene is an intimidating thing to do. It's (usually) such a personal, private act in real life that creating one for the world to read can feel like pulling down your proverbial pants. Revealing your thoughts, feelings, fantasies, and experiences in the written word can be cathartic, liberating, and painful! Offering that window into your psyche, intended or not, can be scary.

But it doesn't have to be.

It's a subject I think many authors have a lot of questions about. Should the characters indulge in a little horizontal refreshment? Do they or don't they? Should I, or shouldn't I? Is it appropriate for my genre? For my book? For me?

They are an incredible tool in your arsenal, in fact. In loving someone else, we discover things about ourselves. So do your characters. Odds are that at some point your characters will be having sex, or thinking about sex, or hoping to have sex ... or fleeing from sex as fast as they can! Sexual intimacy opens up all kinds of emotional territory, and it's great to show characters discovering themselves.

Here are the fears that I see most often causing performance anxiety at the prospect of penning a little shaking of the sheets.

•If I write a sex scene, will I alienate my readers, or lose them?

•Will it be boring?

•How do I write for a different gender believably and inoffensively?

•How do I write a sex scene without using cringe-worthy or filthy words?

•Is it necessary to write at all? Is it believable?

•Am I writing smut? Am I a pornographer now?

•What if my dad/mom/son/daughter/grandma/pastor reads it?

If any or all of these things have been bothering you, read on.