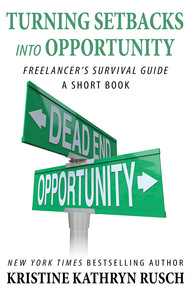 Setbacks happen to everyone. Surviving them is hard. Surviving failure is even harder. But every successful person survives at least three failures before finding that success. So how do you turn failure to success?

The answers lie in this book-length excerpt from the massive Freelancer's Survival Guide by international bestselling author Kristine Kathryn Rusch, who will show you how to turn those inevitable setbacks into opportunity.

Easier said than done, of course. Most of us want to do everything we can to prevent failure.

This short book is three chapters of a huge how-to book called The Freelancer's Survival Guide, which was initially published on my blog, kristinekathrynrusch.com. The entire Guide is available as both an e- and a paperback book. But this piece will work better if you remember it was initially published as weekly blog posts and written in real time in 2009 and 2010.

Turning Setbacks into Opportunity is part of the Freelancer's Guide Short Book series. I carved some of the entries in the Guide into short books because not everyone wants all of the advice in the larger Guide. Sometimes people buy how-to books for one small section. If you're one of those people, then this short book is for you. I hope it answers all of your questions about surviving setbacks, recovering from failure, and using hindsight to solve future problems.

If you want to see how others responded or if you want to see the original posts, go to my blog, kristinekathrynrusch.com, and click on the Freelancer's Survival Guide tab at the top. That will take you to the table of contents. The posts are clearly marked.

I hope this short book will help you avoid trouble. If you're already in trouble, I hope it'll help you resolve your problems.