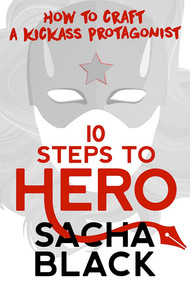 Sacha Black is a bestselling author, rebel podcaster, and professional speaker. She writes educational nonfiction books for writers and fantasy books for both Young Adult and adult audiences. She lives in Cambridgeshire, England, with her wife and son.

10 Steps to Hero: How to Craft a Kickass Protagonist by Sacha Black

From cardboardcut-out to superhero in 10 steps.

Are you fed up of one-dimensional heroes? Frustrated with creating clones? Does your protagonist fail to capture your reader's heart?

In 10 Steps To Hero, you'll discover:

+ How to develop a killer character arc

Finally, there is a comprehensive writing guide to help you create your perfect protagonist. Whether you're writing your first storyor you're a professional writer, this book will help supercharge your hero and give them that extra edge.

First, there were villains, now there are heroes. If you like dark humor, learning through examples, and want to create the best hero you can, then you'll love Sacha Black's guide to crafting heroes.

I started 13 Steps To Evil - How To Craft A Superbad Villain by saying: 'heroes are interesting. But mostly they're predictable.' I wrote that book because I wanted to throw a Hiroshima-sized nuke into character creation, up the tension, build the villainous ante and slather stories with enough conflict and nail-biting action readers would rather eat their own kidney than put your books down. And it worked. Thousands of you bought and read 13 Steps To Evil and developed your villains into sinister badasses.

But that also created a problem.

Your villains stole the limelight and your heroes were neglected, left in the dark — or maybe I should say light — to stare longingly at their glowingly heroic complexions as they decided which princess to save next. It's safe to say that, more often than not, heroes are dull and predictable. But they shouldn't be. And that's why I had to swallow my villainous love and write this book.

It's time to get down and dirty with your protagonist, dust off your star-spangled chivalry pants and prepare for hero beating (into shape, of course; not defeat. This is a book about heroes. And I promise to stop the villain worship in a minute… probably).

This book will help you take your heroes from cardboard cut outs to dashing debonairs with glints in their eyes, dusty haloes and killer character arcs. Together, we're going to make sure the hero-charm doesn't flatten your story. We don't want heroes with sagging muscles like a has-been Olympic star, thank you very much. Instead, your hero will swoon his way into your readers' hearts and grip them page after page after page. Sound like the kind of awesome story with kickass characters you're after? Then I can help.

If you're reading this, my guess is you fit into one of the following categories:

•Your hero is flat, boring or not quite cutting it on the charisma scale

•You're a cape-wearing villain at heart and couldn't possibly write a charismatic, handsome hero

•You already wrote a hero, but they were clichéd and sporting an ego bigger than your word count

A few points to note about reading this book:

I've (where possible) avoided any duplication of content from 13 Steps To Evil. Where you will inevitably see repetition is in the definition of a word or term. After all, things can only mean what they mean, and heroes and villains are essentially both 'book characters'. Therefore, there is some minor overlap.

I have used the words 'hero' and 'protagonist' interchangeably throughout this book to avoid repetitive word use. However, they do mean slightly different things in literary terms, and I'll explain the difference in STEP 1 - Define the Debonair. For clarity – use whichever word fits your character and your story.

I've used a wide range of well-known books and films as examples throughout this book. I've stuck to well-known ones to minimize spoilers. But, inevitably, to illustrate an example fully I've had to explain some plots. You can avoid all spoilers by skipping over the examples.

But don't skip them. They're helpful, obviously.

If you're faint of heart, dislike bad words or dark humor, be aware you might experience some botty tingling throughout the duration of this book. It's not terminal; you will make it to the other side. Trust me; I'm a villain doctor.

Then let's get our hero on.