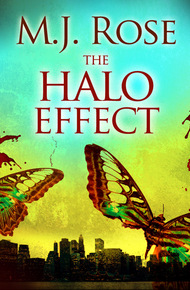 The Halo Effect by M.J. Rose

The first thing she saw were the woman’s feet, so white they looked like the marble feet on the statue of the Virgin Mary who wears the gold halo and stands in the Catholic church where she attends mass every morning before coming to work at the high-rise hotel on Sixth Avenue. The church where she attended Sunday mass only four hours before. Except these feet oozed black-red blood.

Celia Rodriguez stared, not yet comprehending. The Virgin’s feet do not bleed, though. Christ’s feet do. Holes through to the soles, spilling blood.

For the love of God.

No. No love here. Blood. Nighttime pools of congealed blood.

These are still only fragments of thought as her mind raced to keep up with her eyes. She could not make sense of this scene. Not yet.

The mosaic of horror seemed to take forever to fall into place, but in reality, from the time the maid walked into the room to the time she finally opened her mouth to attempt—and fail—at a scream, only one minute passed.

In random order Celia Rodriguez registered that there were fifty-dollar bills, no longer green but soaked dark brown, dozens of them, surrounding the woman’s head. Like a halo. And what she had first thought was a blanket was a voluminous black dress pushed up to show shapely naked legs. No, revealing more. Pushed up farther to reveal a chestnut patch of hair between the legs. Too bare. More naked than naked.

The fifty-year-old housekeeper and mother of three stared, sure that what she saw was a vision of some kind.

The woman’s pubis had been shaved in a particular shape. She knew this shape. But before she could focus on that, she saw that there was blood oozing from there, too. Celia’s eyes shifted from right to left, taking in that the woman’s hands were outstretched in a T position and lying in yet more viscous blood.

Celia could not believe what she saw. None of it. Especially not the shape the hair had been shaved into. She knew this shape. It was engraved on her own heart. It hung around her own neck in gold.

It was a cross.

With that, everything finally slipped into place: the plentiful and flowing dress was a nun’s habit.

The Spanish woman who opened the door only seconds before fell to her knees and touched the corner of the robe. Her hand came away, stained with bright crimson. She was mesmerized by this horror that made her think of a shrine in the back of her church. Our Lady of Sorrows.

Her eyes returned to the shape carved out of the wiry hair. Why did she have to keep looking there? At that cross. At that blasphemy.

And then she saw more. There was more?

Dripping from the woman’s nether mouth was not just blood, but something that was alive, moving, almost crawling. No, it was a rosary that was dripping blood, drop by drop from bead to bead. The blood had washed over the oval medal of the Virgin and had painted the Christ figure. What had flowed off of him had soaked into the carpet. And still it came. And still it came. Christ’s blood. This poor woman’s blood.

The housekeeper opened her mouth and tried to scream but no sound came. She called for her God, and even if he heard her, no one else did.

It would be nearly half an hour before she could make any noise. Then hotel security came, followed ten minutes later by three uniformed policemen. But it would take an hour for Detective Noah Jordain of the Special Victims Unit to get the phone call while he was sitting in a steamy and crowded restaurant in Chinatown, finishing up a spicy bowl of hot and sour soup and about to start in on a platter of crabs in black bean sauce.

Twenty-four hours later, Jordain learned that the woman who had been brutally murdered was not a woman of God at all, not married to Jesus Christ or pledged to charity or good works, but rather a call girl who had one prior and had just finished up her last stint in prison four months before.

“At least she had a head start at getting into heaven in that outfit,” Jordain said after leaving the autopsy room, while he and his partner, Mark Perez, examined the nun’s habit the woman was wearing.

“No, that this isn’t the beginning of something.”

Jordain nodded. He’d already been there, thought that. A murder like this, ritualistic and designed, was not just an act of passion. It was, in all likelihood, the calling card of a sociopath on a mission.

Statistically, things would get far worse before they got any better.