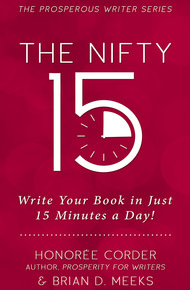 Honorée Corder is an executive and strategic book and publishing coach, TEDx speaker, and the author of more than 50 books includingYou Must Write a Book.Additionally, she is co-creator of The Miracle Morning book series with Hal Elrod.Honorée passionately helps business professionals and entrepreneurs write, publish, and monetize their books, boost their brands, and get much more business! She also runs the Empire Builders Mastermind, does all sorts of other magical things, and her badassery is legendary. You can find out more atHonoreeCorder.com.

Brian D. Meeks is a former data analyst turned novelist. He makes his living as an author, speaker, and coach, working with people to help them achieve their dream of becoming a full-time author. He's written 19 novels and 6 non-fiction books, including Mastering Amazon Descriptions, which is the art of getting people to want to read your book.

The Nifty 15 by Honorée Corder and Brian D. Meeks

Moving from dream to reality takes only fifteen minutes per day.

You know it's been rattling around in your head since you were young. You want to write a book because the call of the muse has been getting stronger. And, perhaps you have heardYou Must Write a Book.The two keys to success for aspiring authors is consistency and a little bit of time.

Honorée Corder and Brian D. Meeks are full-time authors who have written over three dozen books combined, both fiction and non-fiction. Honorée is an expert in non-fiction and Brian has penned tomes across five fiction genres. They've combined their knowledge to lay out the best practices and answer the most common questions they hear from new authors.

The Nifty Fifteenwill take you from the blank page to finished book by wiping away the fear that is born of not knowing where to begin. Lastly you'll be given exercises that will make the process easy to undertake.

Everyone has a story to tell. It just takes a little time each day, so why not giveThe Nifty Fifteena read.

We are delighted you're here. We, Brian D. Meeks and Honorée Corder, are prosperous writers. We're both sharing our points of view in this book, and we'll be sure to let you know who's doing the talking.

Brian writes mostly fiction across five genres and under his name and a pen name. He's been at it since January 2, 2010 and makes his living as an author. He enjoys crafting snark with a side order of mockery. Honorée writes serious-with-a-side-of-humor nonfiction for business professionals, divorcées, single parents, college-bound students, aaaannnndddwriters.

A Few Words from Honorée

Can you really write that novel or nonfiction book in just 15 minutes a day? I say a resounding yes! I've written more than 20 books, and all of them have been written (including this one) in between speaking engagements, coaching calls, making breakfast for my daughter, or even during the commercials of my favorite television programs. What I've never had, much to my chagrin, is an unlimited amount of time to sit, ponder, and write. As a busy mom, wife, friend, coach, speaker, multiple business owner … you get the picture … I've had to squeeze in writing books.

I'm asked this question a lot:How do you write all those books?My answers are contained in this quick read, which will get you motivated and inspired to plan and write your book, over the next 100 days, all in just 15 minutes a day!

Here's the fun part: I'm writing my sections of this book while Brian is simultaneously writing his book using the formula set forth in this book. While Brian has many books to his credit, we wanted a real-time, real-world example that in just 15 minutes a day, what we call the "Nifty 15," writing a book is possible. In addition, he shares "his side of the story," i.e., his thoughts, ideas, and advice for finding time to write and making the most of that time. As you'll see, it's entirely possible! We believe that if it's possible for Brian and for me, it's possible for you.

A Few Words from Brian

Writing a book is as much a mind-set as it is banging out the words on the keyboard. I couldn't think in terms of writing an entire book until I'd written seven novels and one nonfiction book. Prior to that moment, I couldn't imagine it was possible despite evidence to the contrary.

The voice in my head kept reminding me of the dread I felt when assigned a 1,000-word paper in college. The thought of a novel, which can contain 50,000 words or many more, was so much worse that I just wouldn't consider it.

I could, however, write 1,000 words, and do it in a fairly short time (historically, hours before class after waking from a dead sleep in terror). With this knowledge I simply "pantsed" the next 1,000 words of the story without any concern for what came next. I didn't know, and I didn't care.

Now, I've written 11 novels, and my thought process has changed. The voice in my head no longer fights me on writing a new novel, in fact, it encourages me. Banging out 50,000 words is no more daunting than making a bacon, egg, and cheese sandwich for breakfast, though it is, admittedly, less yummy.

So now we embark on an adventure to make the process even easier. I've never tried writing 15 minutes per day. I have written for much longer time periods and done it every day, but I've also known I wasn't using my time effectively. I allowed distractions to get in the way.

The Nifty 15 isn't just about getting from sentence one toThe End. It's about accomplishing that goal in a way that writing becomes a part of your life that's so routine that it's indistinguishable from the other parts of your day. And this routine paysroyalties.