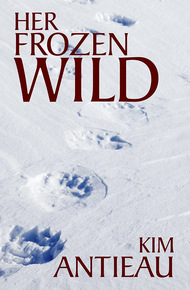 Kim Antieau currently lives in the Sonoran Desert on The Old Mermaids Sanctuary with her husband, writer Mario Milosevic, and a myriad of wild animals and plants. She is the author of many published novels, including The Jigsaw Woman, Church of the Old Mermaids, Queendom: Feast of the Saints, Coyote Cowgirl, Butch, and Whackadoodle Times (1-3). Two of her novels have been shortlisted for the James Tiptree Award. Her young adult novel Broken Moon was a selection of the Junior Library Guild.

Her Frozen Wild by Kim Antieau

When American archaeologist Ursula Smith learns she shares genes with a recently unearthed 2,500-year-old Siberian mummy, she is compelled to unravel the puzzle of her link to this mysterious tattooed woman. Ursula travels to Siberia where she learns the mummy is one of the ancient People, a wild and free tribe that roamed the Altai centuries ago and then mysteriously disappeared without a trace. Ursula uncovers more layers of meaning in the mummy's tattoos and discovers links to her own family, including her mother who disappeared years ago. As Ursula embarks on a journey of discovery to uncover her own deep roots in the Siberian wilderness, she tumbles back through time to face her destiny as a wild and primeval creature with the power to change history and save the People and her own family from oblivion.

I have known Kim longer than anyone else in this bundle, except my husband Dean Wesley Smith, who introduced us. Kim's writing has a mystical element that seems to come from her very core. Her Frozen Wild combines genetics with mummies and Siberia (!) to take us on a journey that could only come from the mind of Kim Antieau.

Asya hurried to catch up with the men, but the October snow was deep, each flake a tiny mirror reflecting the sun into her eyes. The landscape quivered. She wondered when they would find the bear. They had already passed one timeless cave, but they had not stopped, and somehow the men had gotten ahead of her. She followed the map their footprints made in the snow. In the distance the white hills wavered, as if they were part of a giant heat mirage.

Suddenly Asya heard the cries of the men, "Come out, Old One! The sun is warm enough for you to come out now!" She ran until she saw the men and boys from her village, dark figures on a plain of white standing in front of a snow-covered cave, its opening matching the darkness of the men. Asya walked closer to them. She no longer cared if they saw her. The men continued to chant and pound their spears on the icy ground in front of the cave.

The bear did not come out.

Two men—one of them Asya's brother—stepped away from the group and ducked into the cave. The others stood quietly, their foggy breath steaming the cold. Asya heard drums and looked around for the kam, but he was not there—it was only her own heart she heard.

Then a rumble came from the cave. Or the ground shook. Something cried out: a baby's wail? The men raised their spears all at once, as if they were one being with many arms. Asya's brother and the other man rushed out of the cave. A dark blond darkness followed. The darkness roared, a sound that shook the snow mirrors and cleared Asya's vision. The men stepped back from the bear.

"Old man!" someone called. "We are sorry. We are not the ones who do this to you!"

The bear tipped forward. Blood matted his chest. His mouth opened, and they fell upon him, plunging their spears into his flesh easily, as if he were a Christmas duck and their spears were forks and they were all fighting for the best piece.

Asya felt dizzy. The landscape was moving. She stared at the steam rising from the bear's gaping wounds and wondered why her father and brother were killing this man. Why were the villagers carving up an old man for their next meal?

The men stopped—shaken from their blood lust—and saw Asya for the first time.

She ran toward them, slipping on the bloody melting ice.

"How can you!" she cried. "Daddy! Why are you killing this man?" She dropped to the ground and cradled the bear's head in her lap. She leaned closer and tasted his breath; as he died, he whispered secrets to her.

Her father pulled her up; the bearman's head thudded against the frozen ground. Blood soaked Asya's clothes.

"You told me we didn't kill the People," Asya said.

"We didn't know," her father said.

"It's only a bear," another man said. "Take her home. She will soon forget."

Her brother reached for her, but Asya turned and ran. Her feet deftly took her over the icy snow; she heard someone behind her trying to catch up, but he kept falling through the snow. She ran until she reached the edge of the birch tree forest, her tears mixing with the bear's blood. Her chest hurt too much from the cold air to go on. She hung on to a birch and tucked her chin into her coat until she breathed air warmed by her own body. A magpie stood on a branch above her, watching. Asya, the magpie, and the forest breathed together until she grew calm.

Then a breeze whispered to her, bringing the smell of bear. She looked up. Amongst the trees, a thick tall yellow-brown figure walked. The slender white trees almost looked like the bars of a cage, only this being was not contained. Asya blinked. It was a woman striding through the forest, wrapped in fur, walking on the ice-snow without slipping.

A woman who was not caged or contained.

Asya glanced in the direction from where she had come and then over her shoulder at the hill which hid her village from view. Then she looked through the trees again. The woman watched her.

Asya released the birch from her embrace and followed the woman deeper still into the wild.