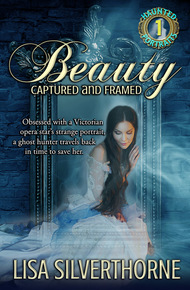 Ghost hunter Jackson Mayfield and his team investigate Port Townsend WA's old, abandoned opera house after learning that the Victorian portrait of an opera singer has resurfaced there. Obsessed with the strange portrait and the beautiful opera star's sudden death in 1896, Jackson intends to test the old Leap Year legend and travel back in time to stop her from jumping to her death. But he can't stop himself from falling in love.

This is Book 1 in a new series called the Haunted Portraits series.

Lisa Silverthorne has also contributed an exclusive book to the StoryBundle. Bounty, Captured and Framed is the first book in the Haunted Portraits series, which features time travel, romance, and portraits (of course!) For good measure, she adds ghosts and Leap Year and all kinds of fun things. Lisa writes great atmospheric fiction, and is at her best when dealing with both love and ghosts. Once you read this one, you'll want the entire series. – Kristine Kathryn Rusch

Then Jackson saw the portraits. Against the far wall. Thick, heavy gold frames, intricate with vines and swirls, each one covered with grey canvas. At least six feet tall, they leaned against the wall. Six of them. The middle one glowed with an ethereal gold light beneath the tarp.

"You getting' all this, Scott?" Jackson asked.

"Damned right I am," said Scott, high end digital camera capturing the strange lights and the glowing portrait. "Oracle, this is Scott. Look what we're seeing down here."

"We're still setting up," Stan snapped. "We haven't even gone to blackout yet. Told you guys not to wander off."

"Stan!" Jackson shouted at his wireless microphone. "Look at the live footage and tell me you guys are capturing this through our body cams, too. Over."

"What the hell is that?" Stan shouted.

Jackson approached the painting that pulsed with otherworldly light, a dull thrum echoing through the barren room. He reached out a shaky hand and slowly pulled away the stiff, grey tarp. Revealing an incandescent painting. A portrait that looked so real that he expected her to move within the frame. One he'd seen so many times that it was branded in his memory.