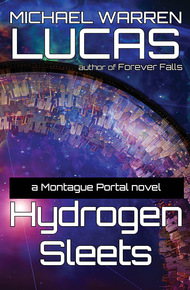 Michael Warren Lucas has written about 40 books and shows no signs of stopping. His other novels include git commit murder, Terrapin Sky Tango, and the forthcoming sequel to Hydrogen Sleets, Drinking Heavy Water. Learn more at https://mwl.io.

Meet the new universe, same as the old universe—

The mathematicians claim this universe obeys the same natural laws as Redding's own.

At the beginning of time, though, the universe writes its own rules…

Inventive minds. Maybe that's what we should have called this StoryBundle. Because most of the writers here have the most inventive minds I've ever encountered. Michael Warren Lucas is one of those writers. He makes his living as a writer of nonfiction and fiction. His nonfiction is so specialized that when he tells me about it, I think he's talking in a foreign language. His fiction is as clear as daylight, and filled with quirky ethical characters who somehow make the most inexplicable situation clear. Here, Michael takes us to the days when our universe was young, and time was just beginning. – Kristine Kathryn Rusch

The Montague Corporation didn't exactly cancel my vacation. They just made it boring. I was in a modest green bikini, sunbathing on a chaise of almost insubstantial molecular mesh and enjoying the Congolese rainforest resort's brilliant clear sunlight and humid tropical fug, when my datalink chirped. "Montague Human Resources for Aidan Redding."

The company had an unexpected opening for a bottom-level security position.

I could have said no. Montague considers vacation time sacred, and I had two months until my next assignment.

But a surprise opening for a security third? Two months in another universe? A universe I wouldn't get to see otherwise?

I'd grown up burning to see the universes. Yes, all infinity of them.

Even if I ignored the seven weeks of medical leave I'd needed to get my hand regrown, I'd had a month of actual vacation. I'd visited my parents—on their anniversary, no less. Their delighted surprise still danced in my heart, but a week in the barrio had been plenty. Any longer, and the gap between us got too uncomfortable.

And the Congolese rainforest resort would be here when I returned.

Normally, assignment to a new universe requires anything from a week to a month of classroom and physical training before you get near the Portal.

I'd never heard of such a thing. Which didn't mean it didn't happen, only that it'd never happened to me. The thought that I might already have sufficient training flared through my head and just as quickly died. Nobody had all the training needed to enter a brand-new universe.

By the time the HR system disconnected, I was already stuffing my French-Spanish phrase book into my bag and my feet into my sandals. Before I reached the airport outside Lubumbashi, they'd sent the tickets and a quarter million words of briefing to my datalink. I swept through customs and onto the Congolese Air ballistic glider, and found myself upgraded to first class. I didn't have time for the complimentary massage or the open bar—the forty-five-minute flight back to Uruguay gave me barely enough time to snatch a few important names from the dossier and memorize the universe summary.

Meet the new universe, same as the old universe.

A Montague car met me at the airport—not an automatic, a limousine. With an actual human driver, a young man hired for charm instead of brains. I noticed the vat-leather seats and the driver's half-flirting repartee, but buried myself in the Physical Environment part of the briefing. I could learn everyone's names and the org chart later, but if this universe's natural laws said "inhale and you'll explode," I needed to know right away. The driver recognized the symptoms and he didn't seem upset.

A brand-new universe—brand-new to me, yes, but also literally a newborn. Only a few hundred million years after its Big Bang. Full of nothing but hydrogen screaming out of that primal blast, torrents of cosmic rays…

And an old-fashioned space station.

A weightless bubble at the core, full of telescopes.

A million tons of metal, protected from the cosmic hurricane by carefully balanced magnetic fields, with antennas and sensors sticking out everywhere. The same magnetic fields sieved hydrogen from the void to fuel the fusion reactors powering the whole thing.

Straight out of a second millennium movie.

Excitement fluttered my pulse all the way to the Portal.

One step between the electrodes of the Portal, and my weight plunged twenty percent.

It's not like I weigh much anyway, but the sudden weight shift set my inner ear whirling and made me wobble. I automatically grabbed for the cool aluminum handrail—not that I saw it, but there's always a handrail outside the Portal.

A petite leather-gloved hand with a grip like a bear trap seized my bicep and said "Easy, ma'am, it hits everyone that way."

"Thanks." I took a breath of fresh but metallic air to steady myself.

About the size of a subway station, the Portal chamber's aluminum ceiling arched away from me, decorated by regular lines of rivets and the occasional octagonal Montague stamp. Electronic equipment and screens lined the walls, along with boxes of cargo bound in and out. Two women in khaki stood further back, one behind a slender touchscreen console, the other with a laser rifle aimed at me.

I didn't take the rifle personally. Returning to Earth, you appeared in a sealed box. If those scanners detected anything harmful, you'd never know it. Montague's zeal in protecting Earth from alien universes would seem maniacal, if the risks weren't so horrific. On my first assignment, an egotistical researcher had tried to carry half a kilogram of antimatter ore back to Earth. It was harmless in its native universe, but on Earth it would have knocked South America into orbit.

The little East Asian guy holding my arm wore too much sharp cologne, the smell like a barbed-wire blanket. His uniform hung too loose over his shoulders. Sensor goggles hugged his eye sockets, presenting him with a billion details about everything they picked up. He had PERCIVAL stitched above the pocket of his khaki uniform shirt. "You okay?" His voice seemed weirdly deep from such a tiny frame.

Percival's goggled gaze moved up and down my body, insultingly direct. I knew he wasn't leering, but I always felt uncomfortable with someone studying me so closely. The Portal's mathematical transformations might have altered me dangerously, or changed harmless bacteria into something nightmarish, and the goggles would show that. They also exposed my skin in a display that would make a strip joint operator envious. I made myself stand still.

Percival shook his head. "Y'all don't get HR." He held out a gleaming black brand-new datalink in his gloved hand. "We have instructions to send you straight to Six. Leave your bag, we'll get it to your quarters."

"Six?" Disquiet tickled my spine. The local Human Resources person should explain the rules, introduce me to my team, and give me the tour. And the tour would presumably include where the heck this Six was.

"Ring Six?" Percival frowned. "How much briefing did you get, anyway?"

"They sent the whole thing. I had maybe half an hour to read it."

Percival tightened his lips. "Don't y'all worry, we'll get you up to speed." He jerked his hand towards the door. "Out them double doors. Turn right. Montague elevator on your right. Sixth ring. It's right by the Core, so there's no gravity. Hang onto the elevator rail as you go up, or y'all'll smack the ceiling. Tell me you at least done the free-fall training?"

Straight to the top? That could not be good. "Thanks." I plucked the palm-sized datalink from his hand. The black plastic rectangle shimmered as it sampled my DNA, then chirped, "Aidan Redding. Montague Corporation. Security Third."

The datalink buzzed as it sucked my personal settings out of the local datacore.

"Come by at dinner," Percival said. "I'll introduce y'all to the team."

"Thanks!" I clipped the datalink to my belt and broke into a trot towards the double doors at the far end of the room.

No introduction. No tour. Not even a map.

For the first time, I wondered why Montague had an unexpected urgent opening here in a universe that held nothing besides hydrogen and cosmic rays. Was I replacing someone? And if so—why?