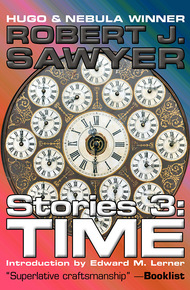 One of the three volumes of the collected short fiction of Robert J. Sawyer, spanning his 40-year writing career. This volume, Time, collects his fiction set in the past, the future, and traveling between those points. Stories include Hugo and Nebula Award-finalist "Identity Theft," Aurora and Arthur Ellis Award-winner "Just Like Old Times," and Aurora Award-winner "Peking Man." Featuring an introduction by Edward M. Lerner and Rob Sawyer's notes on each story.

Many readers discovered bestselling, award winning writer Robert J. Sawyer through the tv series made from his popular book FlashForward. Rob loves to play with time travel. Here, he shares many of his award-winning stories about time and time travel, along with notes about the inspiration for the stories. – Kristine Kathryn Rusch

From "Just Like Old Times" by Robert J. Sawyer:

The transference went smoothly, like a scalpel slicing into skin.

Cohen was simultaneously excited and disappointed. He was thrilled to be here—perhaps the judge was right, perhaps this was indeed where he really belonged. But the gleaming edge was taken off that thrill because it wasn't accompanied by the usual physiological signs of excitement: no sweaty palms, no racing heart, no rapid breathing. Oh, there was a heartbeat, to be sure, thundering in the background, but it wasn't Cohen's.

It was the dinosaur's.

Everything was the dinosaur's: Cohen saw the world now through tyrannosaur eyes.

The colors seemed all wrong. Surely plant leaves must be the same chlorophyll green here in the Mesozoic, but the dinosaur saw them as navy blue. The sky was lavender; the dirt underfoot ash gray.

Old bones had different cones, thought Cohen. Well, he could get used to it. After all, he had no choice. He would finish his life as an observer inside this tyrannosaur's mind. He'd see what the beast saw, hear what it heard, feel what it felt. He wouldn't be able to control its movements, they had said, but he would be able to experience every sensation.

The rex was marching forward.

It wouldn't be the same if it wasn't red.

"And what, Ms. Cohen, did your husband say before he left your house on the night in question?"

"He said he was going out to hunt humans. But I thought he was making a joke."

"No interpretations, please, Ms. Cohen. Just repeat for the court as precisely as you remember it, exactly what your husband said."

"Thank you, Ms. Cohen. That concludes the Crown's case, my lady."

The needlepoint on the wall of the Honorable Madam Justice Amanda Hoskins's chambers had been made for her by her husband. It was one of her favorite verses from The Mikado, and as she was preparing sentencing she would often look up and re-read the words:

My object all sublime

I shall achieve in time—

To let the punishment fit the crime—

The punishment fit the crime.

This was a difficult case, a horrible case. Judge Hoskins continued to think.

It wasn't just colors that were wrong. The view from inside the tyrannosaur's skull was different in other ways, too.

The tyrannosaur had only partial stereoscopic vision. There was an area in the center of Cohen's field of view that showed true depth perception. But because the beast was somewhat wall-eyed, it had a much wider panorama than normal for a human, a kind of saurian Cinemascope covering 270 degrees.

The wide-angle view panned back and forth as the tyrannosaur scanned along the horizon.

Scanning for something to kill.