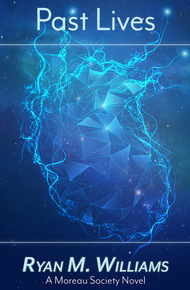 Ryan M. Williams lives a double life as a full-time career librarian and a multi-genre writer with over twenty books. He writes across a range of genres including science fiction, fantasy, paranormal, mystery, horror, and romance, including his popular Dead Things and Moreau Society series. He earned a Master of Arts degree in writing popular fiction from Seton Hill University and a Master of Library and Information Science from San Jose University. His short fiction has appeared in Pulphouse Fiction Magazine, On Spec Magazine, and anthologies from Pocket Books and WMG Publishing. He lives in Washington State with occasional forays into virtual reality. To keep up with everything he creates, visit him at ryanmwilliams.com.

Past Lives by Ryan M. Williams

More than a case…

…it threatens his past, present, and future.

Events threaten Brock's past, in a time he thought he left behind with his humanity. Now he teams up with a former enemy to track down a missing alien artifact. It could prove the key to unlocking time itself.

Trapped in the past, on a spaceship destined for war, Muriel fears changing the future. With an alien intern for company, can she survive this time? With no hope of rescue, can she save herself, the future, and find a way home?

You'll love this sci-fi space adventure because of the mystery, excitement, and tension that spans worlds.

Ryan Williams plays a mild-mannered librarian by day and by night, he becomes one of the most inventive writers I know. He writes in multiple genres, even in the same book. Past Lives combines time travel with aliens and warfare to provide one of the most adventurous tales in the entire bundle. – Kristine Kathryn Rusch

Icall my companion Drac, a joke and an insult that he doesn't understand. I can't pronounce his true name. My mostly human vocal cords can't make those sounds. I'll give Drac this, he moved as quietly as the bat he resembled.

Night on Olinda never gets entirely dark. Especially not when the planet's two moons, Hansel and Gretel, hung in the sky. Drac stuck to the shadows of the craggy rock face above me, his dark body hidden to normal human eyes.

Not mine. Brock Marsden, detective and a founding member of the Moreau Society. I've incorporated alien DNA into my body through the use of the Galactics' Moreau Pod. I've remade myself. I see much better than normal humans. Even more than that, I saw all around us with my Euzebian scent-sight. An odor of rust and blood rose from Drac, that familiar smell of a Nosferan, but in my scent-sight, he glowed with a pearly sort of color.

The dark, craggy rocks sheltering Drac gave off little odor. A few ashy molecules hinting at the long-dormant volcanic activity that thrust up the shattered islands that made up most of the habitable land on Olinda.

Shadows might hide Drac from other eyes, but to my inner scent-sight, he was glowing as the molecules rose up and the wind snatched them away. The rust and blood smell of him blended with the salt spray of the ocean and the peppery smell of the pastel green coiled plants clinging to the rock face with us.

Twenty meters below us, the waves pounded against the rocks. Hardy organisms clung to the pockets and pits of the rock, nourished by the spray. No sandy beach here. Nothing but a long drop into waves that would smash us to bits.

Not that Drac had to worry. He could fly away. He climbed to stay out of sight. I, on the other hand, despite my other enhanced abilities, wasn't so lucky. If I fell that'd be it and any hope of saving my lover and my best friend would die with me.

Muriel Reinhard, fellow detective, Moreau, and my lover, had disappeared into the past. She wasn't alone. Drac had brought proof of that. Our agency's intern and my friend, a massive Eyotan named Dyami was with her. Dyami was huge, black with orange stripes and looked like some sort of Halloween nightmare. Sweet guy, unless he got mad.

The key to saving them was above us, locked in Orlando Pike's fortress. He had a piece of Galactic tech which I needed to get them back.

"We must move, Esteemed One." Drac's whisper reached my sensitive ears.

"Brock. I've told you." The whole Esteemed One business brought up memories I didn't want to think about. Things I had thought safely buried almost a hundred years ago.

I reached up with my left hand, fifteen segmented, bright red tentacles reaching out and finding tiny cracks in the rock. The C'lacktal hand wasn't my idea, even if it had proven useful. The tentacles were a lot stronger than they looked.

Anchored, I reached with my other hand. I relied on my scent-sight and feel to find the next handhold. I pulled myself up the narrow crack. Like Drac, with my dark coat, I was effectively hidden from most eyes. Unless an alien came along that saw infrared, no one would see us. Even then, it might not matter. Olinda's permissive laws regulated very little, so long as it didn't harm anyone else.

Climbing the rocks wasn't the problem. What we planned to do when we got to the top? That was something else.

Chuffing cries floated through the air behind me. I didn't see anything at first, but I recognized the sound. A second later I picked up a salty, musky smell, a blur in my scent-sight, streaking past a meter from my head.

Olindan diving bats. Bat-like, native animals, with a daredevil streak in them. They nested on the steep rock faces, like this one. The last thing I wanted to do was get close to their nesting ground. They had a long flexible mouth surrounded by a ring of sharp teeth. Ordinarily used for plucking fish from the ocean, but they would try to take a bite out of us if we ventured too close.

Drac kept moving, kept climbing. If the diving bats bothered him, I couldn't tell. With humans, my scent-sight gives me emotional clues to what someone is feeling. With aliens, I don't have the wiring to understand what I'm picking up. When I focused on Drac, I picked up a faint sweetness beneath the more over-powering rust and blood smells.

Climb. Fingers and tentacles found pockets and pits in the rock. With my thin-soled boots, I found plenty of traction. Centimeter by centimeter we climbed higher up the rock face.

More diving bats flew past, chuffing loudly. The wind of their passage buffeted me.

A warning. They must have a nesting site above.

Drac hissed. His leg kicked out, dexterous clawed toes snatching at a passing diving bat. He missed. The bat folded its wing, dropping beneath the leg.

Daredevils. Down on the roadways and crag-spanning bridges, the diving bats would fly in front of passing ground vehicles or flitters.

"They must have a nest above," I said.

Drac's wing snapped out. His four-fingered hand at the top of the wing, snatching a diving bat as it twisted and tried to rise above the wing. He caught it right behind its neck. The bat was almost half Drac's size, but its momentum lost, it flapped frantically in his grasp.

The diving bat emitted a shrill cry of fright, cut off when Drac clenched his fingers closed. Bones snapped and cracked. He released it, and the corpse fell.

I pushed against the rocks as the black, hairless bat tumbled past and disappeared far below in the waves.

Agitated chuffing cries grew louder all around us. Diving bats are communal, social creatures, and Drac had just killed one of the colony.

In number, they could probably force us right off the rock face. What a way to start the day.