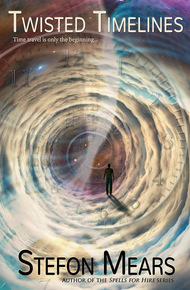 Ten thrilling tales of desperate characters traveling and twisting time, stalling it, shifting it, and even shredding it.

Will any timelines survive?

•"The Face of Trouble" — body-hopping time travelers battle for the future
•"The Side-Effect Staircase" — a man climbs a phantom staircase out of his world
•"Paradox. Lost." — a scientist unstuck in time struggles to return home
•"If You Kill Hitler…" — a retired soldier travels time to right a damnable wrong
•"No Shortcuts to Fame" — a rock singer awakens to find a second him, standing beside his bed

…and much, much more!

Twisted Timelines, a wild ride collection of science fiction and fantasy short stories. You may never look at time travel the same way again! From Stefon Mears, author of The Telepath Trilogy, the Rise of Magic series and the Spells for Hire series.

Stefon Mears uses the word "twisted" to describe the timelines in this collection of short stories. I think "twisted" also describes Stefon's view of the world. When you give him story elements, from aliens to staircases, Stefon always takes those elements and comes up with something completely original. Twisted Timelines is exclusive to this StoryBundle. – Kristine Kathryn Rusch

The Face of Trouble

I never know which face is mine.

In the crowd. In the mirror. I could be any of them. I could be you. And I might never know it.

I wake in the morning. Already a change. Last I recall I was a hospital orderly working the night shift in Nineteen Eighty-Six. I was a big guy then. Hefty, but with at least as much muscle as fat. But it's morning this time, yellow sun high over the fir trees and snowy mountain peaks outside my cabin window.

The glass looks either cheap or old, little runnels of warp here and there.

Did I go backward again? No. I hear a heater click on, smell warmed dust entering the room. The window is caulked around the edges. The "log" cabin around me is façade.

The girl in the bed is real. Leggy. Dark skinned like me. Blonde. Probably not like me. Rare for this skin tone. She's still asleep, sprawled in a silk nightdress and a mess of plaid flannel sheets. For some reason I don't think she picked them out.

I'm male this time, a wiry kind of skinny. And unlike the blonde, I sleep in the nude. Or at least I did last night. I dig through the chest of drawers (also faux log design) but no sign of a wallet. Not on the tree stump nightstand either. But I do find underwear, jeans and a plain white tee shirt that fit me. Plus some silkier underwear and shapelier clothes that probably fit her.

Frankly, I'd rather wear those. Men's clothing is so plain and stolid. Boring. But my body is male again and I need to blend in.

The girl is good and bad news. Good because we're obviously a couple. Neither of us cheating. Well, I suppose this could be a weekend away from our spouses or something, but at least neither of us is wearing a wedding ring. So probably not cheating.

That's good. A couple of wake-ups ago I found out I was cheating on my husband because he walked in at, shall we say, an inopportune moment?

Hard to apologize when you don't know the person yelling at you. Which is the bad part about the blonde. She's going to expect me to know who she is, and where we are, and probably what our plans are for the day. You know, the typical things that most people take for granted. The kinds of things I never know.

Like my face. I could go look in the mirror above the dresser right now, if I wanted, but it wouldn't do me any good. All I would see is my mission. And I'm not ready for that yet. Damn it, this time I want to get my legs under me before people start shooting at me.

Doesn't seem like a lot to ask, but you'd be surprised how rarely it works out that way.

I finally find my wallet and a room key in a light, tan jacket, hanging on a wire hook in a small armoire. Must be summer in the mountains, because even the purple jacket next to mine is light. Two small roller suitcases on the floor, next to hiking boots and tennis shoes. Guess that tells me what the plan is for today.

Good way to spend a vacation. Wonder if I'll ever get to find out.

Colorado driver's license says my name is Jason Ogilvie. It's got a birth date too, but that doesn't do me much good when I don't know what year it is. I do know that this guy was born after the last time I woke up. Which tells me nothing, really, but I always check.

You might think I could see my face in the driver's license picture. Doesn't work that way. I don't see my mission, because the surface isn't reflective, but all I do see where the face should be is what I call the "Traveler haze." Like a cloud of green gas around the head of the host.

There's cash in the wallet too, and two types of credit cards. Seems Mr. Ogilvie does pretty well for himself. He also carries a gym card and a couple of others with store names on them, but they don't look like credit cards. Nothing that tells me who Mr. Ogilvie is. What he does. What his hobbies are.

Well, Mr. Ogilvie, I'll try to get your body back to you in one piece. If it works that way. I don't know what happens to the people who host me, after I leave.

"Come back to bed, Jason." The blonde's voice is smooth, sultry. "It's too early for breakfast."

"Be there in a second." I pull on the sneakers and turn toward the front door. "I just want to pick up a paper."

"Come on, Baby." The words sound taunting more that teasing. They're followed by a distinctive click. The hammer pulled back on a pistol. "I insist."

I close my eyes and curse whatever fates managed to arrange this arrival. I open my eyes before I turn around, but I might as well not have bothered. I already know what I'm going to see, and I'm not disappointed.

The blonde is sitting up in bed, holding a forty-four caliber revolver in a steady, two-handed grip. Physically she looks fetching, like the cover of some old detective pulp. I got to read dozens of those on one long assignment. She's even got a sinful smile going.

But none of that is the problem. The problem is the green haze of a Traveler I can see surrounding her head. The same way, no doubt, she can see it around mine. I can make out the smile, but that's about it.

"Should have checked the mirror," says the blonde. "Now you'll die without even knowing your mission. Talk about a black mark on your record."

She pulls the trigger.