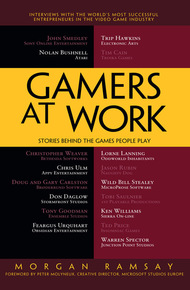 Most recently, his interview with EverQuest cocreator Brad McQuaid, The Inside Story of How A Major MMO Went Wrong, was published by IGN, reaching more than 40 million unique visitors worldwide. Currently, Mr. Ramsay is developing 60 more longform interviews with creative leaders, technical wizards, and Hollywood celebrities for three books about entertainment.

In addition, Mr. Ramsay is the Founder, President & CEO at Entertainment Media Council, the association for business leaders in the video-game industry. For the seven years prior to starting EMC, he was the Managing Director and Chief Brand Architect at Heretic, a privately owned marketing and public relations agency where he provided strategic communication expertise to defense and entertainment clients, from small businesses to the Fortune Global 500.

Gamers at Work: Stories Behind the Games People Play by Morgan Ramsay

There are few companies in the video-game industry that have withstood the test of time. Most startups exit as quickly as they enter. In Gamers at Work: Stories Behind the Games People Play, the countless challenges of building successful video-game developers and publishers in this unstable industry are explored through interviews containing entertaining stories, humorous anecdotes, and lessons learned the hard way.

Gamers at Work presents an inside look at how 18 industry leaders play the odds, seize opportunities, and transform small businesses into great businesses. Here, in Gamers at Work, you will find their stories replete with their personal struggles, corporate intrigue, and insights into strategy, leadership, and management.

Some of the most interesting and methodical interviews I've read with video games' originators are at play in Morgan's book. From EA's Trip Hawkins to a rare interview with Sierra's Ken Williams and far beyond, you get the straight dope in a well-documented, carefully crafted form - from the people who made history. – Simon Carless

Jason Rubin and Andy Gavin cofounded Naughty Dog in 1986, becoming two of the youngest contractors to develop for Electronic Arts. During its rise from a scrappy startup to an industry powerhouse with three of the top-ten games for Sony PlayStation, Naughty Dog established a reputation as one of the most innovative developers of video games on the planet.

In 1994, the company created its first major franchise, Crash Bandicoot, of which the titular character became the de facto mascot of the Sony PlayStation. Now spanning at least 16 titles, the Crash Bandicoot series has since sold more than 50 million units worldwide, and the third title in the series was the top-selling foreign-made video game in Japan. After parting ways with its publisher, Universal Interactive, Naughty Dog followed Crash Bandicoot with another bestselling series, Jak and Daxter, but not before being acquired by Sony Computer Entertainment in 2001. Rubin and Gavin left the studio in 2004.

After Rubin and Gavin had left the company, Naughty Dog released Uncharted: Drake's Fortune for the PlayStation 3 in 2007, and then the sequel, Uncharted 2: Among Thieves, in 2009. The sequel received critical acclaim and won more than 100 awards, including the coveted Game of the Year awards at both the Interactive Achievement Awards and the Game Developers Choice Awards.

Ramsay: When did you get started with Naughty Dog? How did you know your cofounder, Andy Gavin?

Rubin: Andy and I met in school at around age 13. We both owned Apple II computers, and the work we were doing with them at the time-from simple programming to pirating-was much more interesting than what the teachers were teaching. So, we would sit in the back of class and talk about computers and programming. We were very young, and there weren't books, websites, or other teaching materials for computers yet, so we learned by experimentation and communication.

I vividly remember thinking that if I kept compressing a file, it would shrink until it was one byte. Andy replied that you certainly couldn't do that, as the unlocking key would expand until it was the entire file you started with. It was thousands of simple realizations like that, and sharing ideas and tips, that led the two of us to figuring out how to make "full games" on our own. It is worth remembering that a full game in those days could be written in a long weekend. There were many false starts, such as a mostly finished golf game that I had created, which Andy destroyed by copying something onto the disk it resided on-this was before hard drives. We also had a mostly realized Punch Out clone that we eventually couldn't finish due to technical issues. And there were many other games that fell in the category now called "not safe for work."

At around 15, after returning from a ski trip, I did the art and code for a game called Ski Stud. The game looked good, but the game slowed down as the skier got further down the slope. I had reached the limit of my coding ability, so I took it to Andy. He rewrote the core of the game, and it screamed! We decided this would be our first published game, so we applied for a commercial license to use the tool we had been using for sprite drawing. We were going to "publish" the game by putting it in Ziploc bags and selling them around Washington, D.C., the area where we lived. Don't laugh. That was competitive packaging at the time! The company that created the sprite tool saw the game and asked if they could publish it for us nationally. We agreed and received a check for $250. We had become game developers!

Ramsay: When you entered the business world, do you remember ever feeling that you were treated differently as a result of your age?

Rubin: I think we were probably too young to notice how young we were. I do remember going to an EA developers' symposium, a big convention of internal developers that EA held every year. Andy and I were both 17 at the time—the youngest contractors to work for EA and well below legal drinking age. The hotel bar didn't seem to mind. I vaguely remember meeting all of my heroes: Bill Budge, Will Harvey, and Brent Iverson. They were early game developers who were all significantly older than me. And I definitely remember having a lot of drinks!

I think you have to have a certain amount of blind, naïve faith in yourself to be an entrepreneur. I truly believed that it was inevitable that I would be successful. If I hadn't had such an unfounded certainty in myself, I would have taken a safer route through life. As a result, success, at any age, never seemed like success so much as part of the logical progression toward something bigger. That sounds arrogant, but I wasn't elitist. I never thought I was special, and I would have supported anyone else who told me that they, too, were destined for greatness.

The serial entrepreneur Jeff Stibel wrote in a column for Harvard Business Review that entrepreneurship is a disease. I have the disease, and part of the disease is not seeing the world for what it is. Perhaps I was treated differently because I was young, but I never noticed.

Ramsay: After Ski Stud was published, what did you do next? Did you incorporate as Naughty Dog and put together a business plan?

Rubin: Business plan? We were 16. Our business plan was to do whatever we thought was cool. Income? Whatever we could make. Expenses? Ask our parents; they paid for the power and rent.

We agreed to do another game for Baudville, now the long-defunct publisher that put out Ski Stud, which had been renamed Ski Crazed for political correctness. The next game was called Dream Zone, and it was a graphic adventure for the Apple II, Amiga, and Atari ST. After selling 10,000 copies of Dream Zone, we decided, as two 16-year-olds, that we were ready for the big time.

So, we cold called the help line at Electronic Arts, which was at that time the largest game publisher in the world, and managed to get a producer on the other end of the phone. A few months later, we were working for EA on Keef the Thief, another graphic adventure for the same systems. Frankly, I still don't know how we pulled that off. It would be the equivalent today of a kid who has a half-million views on YouTube cold calling Warner Brothers and getting a movie deal.

Keef sold well, compared to its development budget, so EA signed us for a second title. That game, Rings of Power for the Sega Genesis, was our first console title. Rings of Power took three years to make because it was a massive title, and because Andy and I were working from colleges in two different states. Rings was critically acclaimed and sold out of its first pressing.

Unfortunately, so did a new game called John Madden Football. When Sega told EA that they could only reorder a fixed number of cartridges, EA chose to go with 100% Maddens. As a large role-playing game, Rings had more ROM than Madden and an EEPROM for saving your game, and had been developed externally. Each Rings cartridge was far more expensive to print, had a royalty attached, and was thus less profitable than a Madden cartridge. Obviously, it was a smart business move for EA. But as the developers getting the short end of the stick, it sucked! EA just decided to shut off the money flow.

Frustrated, Andy and I took some time away from game development, but it didn't last long. Eight months later, Trip Hawkins called us and told us about his new project: the 3DO. He is a persuasive man, but possibly his strongest argument for the system was that on a disc-based console with plenty of memory and discs that were readily produceable, we wouldn't get screwed by cartridge-printing decisions again! It didn't take long to discuss the opportunity. Trip gave us free development kits, and Andy and I began work. We had no publisher attached, it was a full-time endeavor, and we financed the game out of our own pockets. Way of the Warrior for the 3DO marked our exit from game making as a hobby and our entrance into game development as a profession. But we still didn't have a business plan.