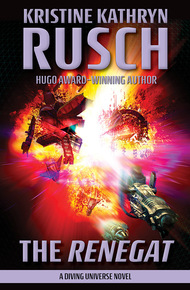 The Renegat by Kristine Kathryn Rusch

As a young recruit, brilliant engineer Nadim Crowe accidentally destroys an entire Scrapheap full of ships. Now, decades later, he ends up on the crew of the Renegat, the only ship in the Fleet ever sent on a mission backwards to investigate an ancient Scrapheap.

Something invaded that Scrapheap and the Fleet wants to know what. Or who.

The Renegat: The only ship the Fleet dares risk. The Renegat: A ship of misfits and screw-ups sent on an impossible mission. All alone in deep space.

A thrilling new addition to the Diving Universe.

The Renegat is a standalone novel in my Diving universe series. The Fleet uses an anacapa drive to enable travel across vast distances. Only sometimes the anacapa drive causes time slips. Some of those slips are minor—a few hours or even a day or two. And sometimes those slips are years, decades, even centuries. The crew of the Renegat finds themselves far from home, both in time and space, only to experience something even worse—a mutiny. – Kristine Kathryn Rusch

The force field breach caught the Scrapheap's attention. It tried to enter the breach properly into its log, but could not cite a date. The Scrapheap did not have the capacity to manufacture a date, so its systems awoke.

The Scrapheap did not know how long it had functioned without human assistance. Its internal clock had doubled over on itself three times and had malfunctioned on the fourth reset. That malfunction did not trigger an alarm, because it was no threat to the Scrapheap itself.

The Scrapheap monitored and evaluated threats. Its protocols demanded that it record major breaches and threats from outside. Internal threats were dealt with routinely.

Energy spikes were minimized. Certain ships were contained within their own private force fields.

The Scrapheap had done such things since its beginning.

It did not think of its beginning as anything but the start of its internal clock. It was not self-aware, although certain systems had more awareness than other systems.

The Scrapheap knew its own history. It had started as five decommissioned ships, stored side by side in a region of space its creators believed to be little used and off the main travel routes for the sector. Those decommissioned ships were to be transferred to the nearest sector base, but the base had no need for the ships.

So the first force field was created. It protected all five ships. Those ships remained in the force field, and then other ships were added. Some were brought in under their own power. Others were towed in by a larger ship. Still others arrived using their anacapa drives.

On one occasion, those arrivals had caused a chain reaction. The energy wave from the arriving anacapa drive had triggered a malfunction in a dying anacapa drive, causing one ship to explode and resulting in damage to two more.

Humans had arrived three months later with a new core for the Scrapheap, and a control center to protect that new core. The Scrapheap's mission grew that day, to preserve and protect the ships and the ship parts inside its force field.

The Scrapheap followed its mission diligently, recording its activity, logging it, using the dates from its internal clock.

If the ship could not move itself, the Scrapheap would do so, using a powerful tractor beam that only existed inside the secondary force field.

The Scrapheap maintained all of the external shields that belonged to the ships gathered in the main force field. In that way, those ships would not spark another disaster. The Scrapheap added and removed miniature force fields, rotated some ships away from others, kept those with dying anacapa drives isolated from ships that could possibly negatively interact with the dying drives.

The humans went in and out of the Scrapheap, removing ships and parts of ships as needed. Some ships' anacapa drives were activated remotely, and those ships left the Scrapheap on their own power. Sometimes humans entered the Scrapheap through various portals built into the large exterior force field, and removed ships.

A ship tried to enter the Scrapheap. That ship did not know the code to activate the portal in the force field, so the Scrapheap activated its defenses.

This was not unusual. It happened routinely throughout the Scrapheap's existence, so the Scrapheap did not create a log for the incident, although the incident remained in the short-term buffers.

Then the ship returned. It used a code that had not been used since the first four hundred years of the Scrapheap's existence.

The ship repeated this behavior for two hours on each of the next five days.

The DV-Class ship left the Scrapheap.

The new ship remained inside the Scrapheap. The Scrapheap tried to contact that new ship. It did not respond. The new ship eventually left via engine power through the opening in the force field.

The Scrapheap had scenarios programmed into its systems for such an occurrence. The scenarios postulated that the ship had stolen the entry codes and was now stealing vessels.

The Scrapheap would attack the ship when it returned.

But it did not return.

At that moment, the Scrapheap attempted to log the interaction as a serious breach. It could not do so. It no longer had the ability to time-stamp a log.

The Scrapheap had a failsafe to send information to its creators should the log function break down. But that failsafe had limitations.

Upon discovering that it needed to send the information from the short-term buffers, the Scrapheap acted immediately. It sent the information along the channels it had been using for its decennial updates.

The Scrapheap also requested a repair of its systems as well as an augmentation that would prevent the unwarranted theft of vessels.

It could not attack vessels that had been stored inside the Scrapheap.

But it could flag the breaches as suspicious, maintain the records of those breaches, until the human creators arrived and determined what to do with the information.

The Scrapheap repackaged six times before the information managed to get through that hurdle in the system.

The Scrapheap then deleted the previous sector bases from its communications channel. It sent information directly to the working sector base.

The Scrapheap did not get a response.

Its systems were programmed to continue to send information until it received instructions.

The emptiness inside the Scrapheap grew.

But it responded like any powerless being under attack.

It asked for help.

It defended itself as best it could, while it waited for a response.