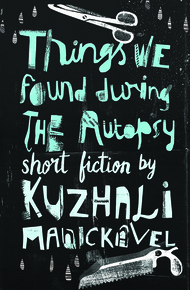 Kuzhali Manickavel was born in Winnipeg and currently lives in Bangalore. She used to blog at thirdworldghettovampire.blogspot.com.

Things We Found During the Autopsy by Kuzhali Manickavel

Things We Found During the Autopsy is South Indian writer Kuzhali Manickavel's second collection of short fiction, in which she presents a dizzying array of apocalyptic visions and fractured childhood memories.

No one writes like Kuzhali Manickavel, and I do mean no one. These stories are not like anyone else's. She's terrific. If you've never read her fiction you're in for a treat. – Lavie Tidhar

On the way to the railway station someone stole our Flood Relief purse, replaced every single coin with buttons, and put the purse back into Clubfoot's pocket without either of us noticing. When we did notice, we were almost at the railway station.

"Daylight robbery," said Clubfoot, in an attempt to use phrases that were appropriate for the occasion. We could see everyone clumped together on the platform, boxed in by bold and innovative luggage. They all had new suitcases that glowed and sliced through your skin if you touched them the wrong way.

"Ours is coming later," Clubfoot lied. "It's been sent on. It's on the way. It's steel blue. It has flowers on it."

Everyone was happy for our new luggage and said it was smart that we had sent it on. They said wasn't it grand to be going like this and we said yes it was and smiled and shook our hands like the excitement was too much to bear. The first train came and we clambered on, helping people stow luggage and seat themselves. Then we clambered off saying there was no room and we'd catch the next one. When the last train started to leave, people stuck their heads out of the windows and told us to stop clowning around and get on the goddamn train already.

"All we have is buttons. Will they let us on with the buttons?" asked Clubfoot. People shook their heads with sympathy. Some of them said what the fuck but they said it with soft eyes that reminded us of dogs and warm pastries. Someone threw us an apple.

A while ago, we had received a Tamil circular, which took us a month to translate because we didn't want anyone to know that we couldn't read Tamil. When we finally figured out what it said, we had one week to meet the Village Officer, get the circular stamped and attested, and collect our Village Evacuation Packet. The Packet included drinking water stamps, milk tokens, egg tokens, and a brochure on incorporating discipline and patriotism into our daily lives. The Village Officer drank tiny plastic cups of tea and told us of the impending flood. It would have rogue waves that would be sixty storeys high, carrying radioactive sea anemones, bright-red algae and monster cephalopods.

"You must leave as soon as possible," he said. "In fact, you should have already left. It's a shame you are still here."

The last train was our only option, he said, and if we sat on the roof it would be less crowded and the breeze would be like real air conditioning. If we missed the last train, he said he would pray for us, although he felt that prayer didn't really accomplish anything.

We watched the last train disappear into the horizon while the station master folded up his flags and took one last look at the otherwise deserted station.

"Why did you miss the last train?" he asked, pointing at Clubfoot's brace. Everyone did that when they spoke to Clubfoot. It was like they were talking to his leg and the rest of him was purely incidental.

"Why did you?" asked Clubfoot.

"I am taking the last bus," said the station master as he walked away. "I guess you will take that too."

"That's right, see you there!" Clubfoot called after him, even though it was a lie and there was no telling what the station master would do if he found out. We watched him disappear into the horizon much like the last train did, shimmering into a tiny spot and then melting into the atmosphere like he had never been a station master at all, just a part of everything else.

"Well I guess we'll drown now," said Clubfoot. "I guess my brace will get rusty as fuck and give me tetanus and my leg will fall off. I guess you'll have to cut my leg off for me when it gets gangrene. I guess having to cut my leg off will make you die of heartbreak."

In the distance I saw a figure walking towards us. Unlike Clubfoot and I who always walked in uneven lines and often forgot where we were going, this figure walked in a straight line like it was intent on killing something. This was Sully, the Americanadian who ran the local whorehouse. Sully was a great guy. Clubfoot and I did not get along with a lot of people but Sully was someone we liked because he was such a great guy. He was wearing cargo shorts and carrying four empty water cans. Soon he was standing in front of us, blocking out a sizable portion of the sky.

"You missed the last train, Sully," I said. "You're going to drown and die just like us."