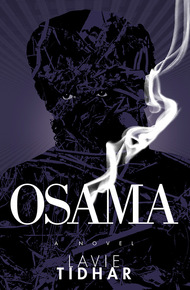 British Science Fiction, British Fantasy, and World Fantasy Award winning author Lavie Tidhar (A Man Lies Dreaming, The Escapement, Unholy Land, The Hood) is an acclaimed author of literature, science fiction, fantasy, graphic novels, and middle grade fiction. Tidhar received the Campbell, Seiun, Geffen, and Neukom Literary awards for the novel Central Station, which has been translated into more than ten languages. He is a book columnist for the Washington Post, and is the editor of the Best of World Science Fiction anthology series. Tidhar has lived in Israel, Vanuatu, Laos, and South Africa. He currently resides with his family in London.

Lavie Tidhar was in Dar-es-Salaam during the American embassy bombings in 1998, and stayed in the same hotel as the Al Qaeda operatives in Nairobi. Since then he and his now-wife have narrowly avoided both the 2005 King's Cross and 2004 Sinai attacks—experiences that led first to his memorable short story "My Travels with Al-Qaeda" and later to the creation of Osama.

"In a world without global terrorism Joe, a private detective, is hired by a mysterious woman to find a man: the obscure author of pulp fiction novels featuring one Osama Bin Laden: Vigilante..."

I couldn't resist including this if only because it improbably won me the World Fantasy Award back in 2012 and hey, it's pretty great really. Look, there's even smoke on the cover. – Lavie Tidhar

The Hilltop Hotel stands on Ngiriama Road in downtown Nairobi. On the busy street outside are shoe-shiners; scratch-card stands; taxi-drivers; dusty shops selling stationary, rice, spices from Zanzibar, tinned foods and fresh tomatoes; down the road a little is an Indian restaurant. Electric fans move dust around inside the low-ceilinged buildings. The Hilltop itself is a run-down establishment catering mainly to backpackers.

The men in room 107a were not backpackers. They had checked into the hotel using fake passports, and were in the final stages of preparing to commit an act of mass murder. They did not, perhaps, see themselves as murderers, though under both the American and Kenyan penal code that is what they would be considered. The men believed they were acting on God's behalf, and perhaps they were right. God was on their side. Soon they would be successful.

Mohammed Odeh arrived in Nairobi on the fourth of August. It was a Tuesday. He had come off a night bus from Mombassa at 7:30am, and checked into the Hilltop Hotel under a fake Yemeni passport, into room 102b. He went to sleep, getting up just before noon. He met with the others. He was dressed as a Muslim cleric, complete with a long beard. Later, he changed his clothes, putting on trousers and a shirt. He also shaved his beard.

He left on Wednesday evening. He spent his last few hours in Nairobi shopping. He had his shoes shined on Moi Avenue, near the American embassy. At 10:00pm he got on a flight to Pakistan.

August seventh was a Friday. The US ambassador was meeting with Kenyan Trade Minister Joseph Kamotho at the Ufundi Cooperative Bank near the embassy. The United States Embassy was a concrete building comprising seven floors, five above-ground, two below. Standing at Post One was Marine Corporal Samuel Gonite. The detachment commander, Gunnery Sergeant Cross, was making his rounds.

Mohamed Rashed Daoud Al-Owhali was dressed that morning in black shoes, a white short-sleeved shirt, blue jeans and jacket. He carried a 9mm Beretta. He also carried four stun grenades. At 9:20am he made a phone call. The truck, a Toyota Dyna, had already been loaded with boxes full of eight hundred kilograms of TNT, cylinder tanks, batteries, detonators, fertilizer, and sand bags. Al-Ohwhali entered the truck on the passenger seat. Driving was a Saudi man known as Azzam. Leading the way in a white Datsun pickup truck was a third man. He was known as Harun.

They arrived at the embassy compound just before 10:30am. Azzam drove the truck to the rear parking lot. A mail van was leaving, and he waited for it to pass before driving up to the drop-bar. Al-Owhali stepped out of the truck. He walked towards the lone guard when he realised he had left his jacket – and his Beretta – in the truck. He still had the stun grenades. He shouted at the guard, demanding that he raise the bar. The guard refused. Al-Owhali pulled the pin out of one grenade and threw it at the guard. There was an explosion. The guard ran away, shouting. Azzam drew the Beretta from Al-Owhali's jacket and began firing at the embassy windows. Al-Owhali began to run. A moment later, Azzam pressed the detonator button.

The explosion tore a crater in the ground. It blasted windows and tumbled concrete, and made men and women fly through the air as they died. Nearby Haile Selassie Avenue was strewn with debris. The windows of the Cooperative Bank House facing the avenue were blown by the blast. The American ambassador was knocked unconscious by the blast and cut by flying glass. The small bank building behind the embassy collapsed onto the chancery's emergency generator, spilling thousands of gallons of diesel fuel into the basement of the embassy. The diesel fuel ignited.

Two hundred and twelve people died in the attack. Four thousand were wounded. One woman, a Kenyan tea-lady from the Ufundi House offices, was trapped under the rubble. Her name was Rose Wanjiku. Rescuers, including marines and an Israeli special rescue unit, tried to reach her. She communicated with them constantly. She had been buried for five days. She died several hours before they finally reached her.

Mohammed Odeh landed in Karachi on the morning of August seven, a short time after the attack. As he went through immigration the first news of the bombing could be heard on the radio. He smiled. He passed through the airport and stepped out into the sunshine. Once outside, he located a phone box, and dialled a number.

'Emir?' he said into the silence of the mouthpiece. He took a deep breath. 'With the grace of God, we are successful.'