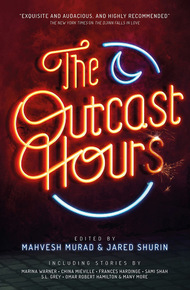 Mahvesh Murad is an editor, critic and voice artist from Karachi, Pakistan. She is the editor of the award-winning Apex Book of World SF 4, host of the interview podcast Midnight in Karachi for Tor.com and the voice of many international radio and TV commercials, as well as multiple short stories.

Jared Shurin has edited or co-edited 12 anthologies in partnership with Tate Britain, the Egypt Exploration Society, the Royal Observatory and others. He has been a finalist for the British Science Fiction and Hugo Awards, and twice won the British Fantasy Award. Jared was the editor of the award-winning geek culture website Pornokitsch.

These are the stories of people who live at night: under neon and starlight, and never the light of the sun.

These are the stories of poets and police, tourists and traders; the hidden and the forbidden; the lonely and the lovers.

This is their time.

Terrific anthology even though I'm in it (my story did get nominated for a CWA Dagger Award though, I'm just saying) by two of the hardest working editors in any field. Themed around "night", it is naturally filled with any and all modern variations on noir. – Lavie Tidhar

(You've long had this belief that this is what will happen when you're at last to descend. It will take your sphere a long time to go down. At first, at the surface, it'll snap and pitch, ungainly, and every wave will fuss it. But when the pumps start and the whirr of engines begin it'll move urgently down, out of the light. The window will sweat condensation as visibility diminishes.

You've long felt that, in a fashion, you will be met. That is to say this:

If you're lucky or have a say the journey will be close enough to the flank of some submerged cliff, that with the occasional blast of cold arc lights you'll see the face of earth and the corals close to you. Perhaps the attentions of cold unstartled animals. So you'll go down into this notional trench whispering into your recorder so you can later hear what a voice sounds like half a mile down. Descending beyond the level of the seafloor thereabouts towards a crack. But what will happen is something other than that swell behind the ribs occasioned by first arrival that you'd have thought you'd be expecting, your heart soon to stir instead because of having been preempted.

At the limits of your light, a few metres before the journey ends, you'll glimpse a figure on a ledge. A dark-glassed helmet and segmented limbs. Armour, metal and rubber and thick glass, of antique design. Tubs of old air, or airlessness now, strapped to a barrel-broad chest. Complex filigree of decorative details on the porthole. A style of which you recognise nothing but its age. Legs sitting straight-kneed looking out into the black like a child at rest after a game. It will have been thus for many lifetimes.

You'll see it below your window on your way and then beside you and then above, quickly, but you'll still be sure of what you saw. Without a word, so as not to alert your companion in the craft—this being a communion you'll claim for yourself—you'll salute that vanguardist who in their death has made you a promise and told you a secret. You and only you will know of a prehistory of women and men committed to the descent.

Maybe what you'll have seen is empty, dropped and fallen to rest in a chance attitude of placidness. But there'll more likely be bones within, pioneer bones. You'll know that.

More: you'll know without proof that the person stopped at their overlooking point not on the way down but the way back up again. Surely that was perhaps a grappling hook beside them? Rope and chains on their shoulder, already worn? When you watch the hagfish worry at the base of the world, they'll do so on striae of slime and silt themselves layered above the print of a caulked hobnailed boot.)

EeLeen Lee was born in London, UK but has roots in Malaysia. After graduating from Royal Holloway College, she spent several years as a lecturer and a copywriter until she took the leap into writing. As a result, her fiction since has appeared in various magazines and anthologies in the U.K, Australia, Singapore and Malaysia, such as Asian Monsters from Fox Spirit Books, and Amok: An Anthology of Asia-Pacific Speculative Fiction. When she is not writing she can be found editing fiction and non-fiction, being an armchair gemmologist, and tweeting at odd hours.

Pleo Tanza is a survivor. Her father was broken by tragedy, her twin sister is dead—chewed up and spat out by the corruption and injustice of Chatoyance—but she's going to make it, whatever it takes. She's going to get off this rock.

But escape is for the rich or lucky. Pleo's framed for the murder of a rival student—the daughter of one of the colony's wealthy, squabbling clans—and goes on the run, setting off a chain events that could destroy the fragile balance of the old colony forever…

"Liquid Crystal Nightingale is an ambitious and complex debut… with a deeply realised world and an utterly unique tone." — The British Fantasy Society

"This novel zooms down a motorway at 150 miles per hour on the back of a motorbike... a strong debut from a writer I will be watching." – Geek Syndicate

"Lee strongly invokes the tension between the different elements of the colony... Richly imagined and engrossing." - SFX

"Shut up, you ant!" Gia snapped. The word hung in the air between her and Pleo.

Instead of anger, an odd relief came over Pleo. She had been waiting for Gia to call her that in front of everyone.

"You picked that up from your parents? Do Tier-Dwellers still refer to us as 'ants' during their parties?"

Pleo almost laughed. But the word was not only meant to sting, but as a threat. Gia could crush Pleo like an ant—and Pleo's life mattered less than a mite living on the ant. Pleo's neighbourhood was based around a central spine of repurposed administrative blocks at an Aront water treatment plant. Hence the functional ugliness of the neighbourhood, and also Gia's attitude towards her: as if Pleo and the families of the Forty were squatting on her father's land.

And was it not earlier this term that some toadying Polyteknical instructor got worked over by a dozen Dogtooths, the personal guards of the Aronts? The incident allegedly happening in an underpass because he remarked to Gia that she was the mirror image of her mother.

Gia held her fla-tessen fan in front of her face. With a flick of her wrist the weapon unfurled with a soft rasp, revealing its leaf of intricate black lace covering ribs of gold-lacquered wood. Pleo instinctively backed away from its arresting beauty, brushing up against the mural behind her, next to Ignazia Madrugal's outstretched hand. Fla-tessen fans appeared to be made with lace and wood, but the "lace" was actually layers of living membrane grownover a mesh of threads finer than silk. Modified stinging cells, harvested from offworld coral farms.

"You're only a tentative candidate for Adept. Threaten me and you'll be off the longlist before Shineshift," Pleo warned.

"Threaten you? With a training fan?" Gia smirked and stepped closer to Pleo. "There's no blade, and the venom will only give you bad rash. Once they award me with a real fan, I won't hear another word out of you, right?"

Pleo extended her index and middle finger forceps and used them to parry aside Gia's fan. The tips of her forceps tingled as they came into contact with the mild venom, and she drew back her arm.

"Apologies, I forgot one survived. Luckily the salvage teams found your father in time. So let's imagine if all Chatoyants were handed a free pass due to some tragic occupational event. This time it's forty, then comes another incident—300, and after that, 3000 more?" Gia gestured to the rest of the students. "Soon enough, Polyteknical classrooms, and even the Tiers themselves, would be overwhelmed with the children of other miners, war veterans and long-haul pilots—"

A sudden bang interrupted Gia's grandstanding. The doors of the hall flew wide open, framing the figure of Saurebaras, and Pleo marveled at her strength. Saurebaras flicked her arm up in a gesture of exasperation and hurled something small at Gia and Pleo.

Both women covered their faces as the thing flew past their faces and hit the mural, smack between the eyes of Ignazia Madrugal. It was shaped like a sea star, matte black and bristling with silver mother-of-pearl spikes. Aside from training footage, Pleo had never seen a fla-tessen caltrop in use before.

Saurebaras took long strides as she approached the mural, not so much walking but flowing towards it with purpose like mercury at room temperature. Gia and Pleo stood to attention, but Saurebaras dismissed them to get changed with the rest. Gia darted off but Pleo stopped halfway to the changing rooms to watch Saurebaras.

She drew closer to Ignazia Madrugal, reaching out to touch the face of the painted image. Saurebaras was more interested in sizing up the damage she had just inflicted on the mural than admiring the artwork. Not enough, Pleo thought, judging from Saurebaras's piqued expression. She had been aiming for the eyes.