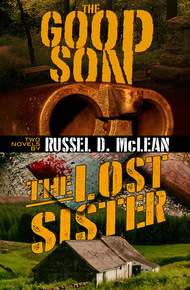 Russel D McLean is the author of five novels featuring Scots PI, J McNee, along with a further two standalone noir novels. His short stories have been published in a variety of magazines and anthologies, including several in Alfred Hitchcock's Mystery Magazine. When not writing, he works as a freelance editor for various publishers, and occasionally teaches masterclasses in creative writing. For the past few years, he has supervised the creative aspects of the dissertations for the University of Dundee's MLitt in Crime Writing and Forensics.

The Good Son and The Lost Sister Omnibus by Russel D. McLean

The Good Son was shortlisted for best first novel at the Private Eye Writers of America's Shamus Awards in 2010.

The first two novels in the J McNee series, collected together exclusively for Storybundle:

The Good Son: When a Scottish farmer finds his estranged brother's corpse hanging from a tree, the police claim suicide. But local private investigator, J McNee, links the dead man to a vicious London criminal, he brings gang war to the streets of Scotland's fourth city, leading to a violent showdown that threatens to leave no one alive.

The Lost Sister: Mary Furst, god-daughter of local hard man, David Burns, is missing. When J McNee is reluctantly drawn in to the investigation surrounding her disappearance, he soon discovers that the worst lies people tell are the ones to protect themselves, and that old secrets have a way of impacting on the present…

No one quite does noir like the Scots do, and Russel is no exception. Part of the new wave of Tartan Noir writers, here he introduces his series character J. McNee, a hardboiled investigator as good as they come! – Lavie Tidhar

I could kill him.

It would be easy.

I'm pointing this gun right between his eyes and he looks like he's laughing at the best joke he ever heard. The only thing that keeps him going is the thought that I won't pull the trigger. He said it himself: don't have the balls.

It's no less than he deserves.

I've already shot a man this evening, so what's the difference now? Like smoking, it gets easier after the first one, right?

The image is still clear in my brain. The bald bastard, the look of surprise on his face, the way his body stops moving suddenly like he's walked into a wall. The way he just crumples, lands in a heap on the sodden ground.

The rain stings my skin, a thousand pins falling from the sky point first. There's a weight behind them that threatens to push me down into the sod.

Root me in the ground like one of these gravestones.

The man in front of me is laughing. Beaten. Battered. But laughing. When he grins I see he's missing a tooth.

He sees it, and his grin widens. He thinks he's spotted a weakness.

Not that it matters. Because he'll be dead before he can do anything.

Forget your fucking principles. Think about Kat. The ragged hole in the centre of her forehead.

Her body left in some empty shitehole of a flat.

Think about Daniel Robertson. Hanging by the neck. Only realising what a mess he made of his life as he struggles to take that final breath.

I hear voices nearby.

Which means it's now or never.

I've been looking for someone to blame. And who gives a crap that this isn't the guy?

Might as well be every prick who ever took a human life.

Might as well be every messed-up fuckbag who killed for kicks or got his fucking rocks off watching his victims plead for mercy.

And that's why I should do this.

That's why this bastard should die.