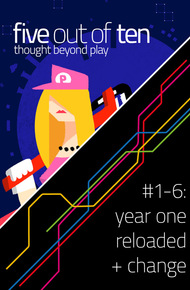 Five out of Ten is a magazine for the curious and thoughtful: for people who demand the best in independent writing. It was founded in 2012 as a publication that is different, diverse, and fair to its writers. Five out of Ten is inspired by classic magazines of the 80s and 90s, yet has an insight and style all of its own. It's a place for the greatest in videogame criticism and culture writing from around the world.

Our first book, Escape to Na Pali: A Journey to the Unreal, was published in June 2014. Our contributors have written for pretty much every great publication in the known universe.

Year One Reloaded + #6: Change (Six Issues Total!) by Five out of Ten

This StoryBundle collection also includes the sixth issue 'Change', originally published in aid of the charity SpecialEffect which adapts videogames for people with disabilities - and bundle organizers have featured Special Effect as the default charity option for this StoryBundle as a direct result.

1 – New Horizons: "Where can videogames take us that cinema, music and art cannot?"

2 – Players Guide: "While many of us have grown up with videogames our whole lives, some players are just getting started."

We recommend you enjoy Five out of Ten in PDF format, but the ePUBs are great too!

We're lucky enough to get six complete issues of one of the best game magazines out there, Five Out Of Ten, which means standout essays on a massive variety of topics from some of the best 'game criticism'-centric writers out there. A cornucopia of voices, variety, and viewpoints! – Simon Carless

From 'Going Stealth' by Samantha Allen in Issue 4, Storytellers

The mirror seems to scream my artifice. I can see every telling detail: the small outcropping of flesh-coloured lace beneath the hairline of my wig, the tiny spot on my chin that I didn't shave perfectly, the peculiar prominence of my brow line.

I look down at the sink and try to focus on the frothy lather that's building in my hands, but I can feel her staring at me. She's washing her hands, too, but she's stopped all of a sudden. I steal a sideways glance through the mirror and notice her eyes moving up and down with a characteristic rapidity and intensity. She's reading me. She knows I'm transgender.

"You shouldn't be in here," she insists forcefully and, when I protest, she threatens to call security. Or maybe she starts to hit me with her purse. Or maybe her overzealous boyfriend is in the men's room. I've had nightmares about this scenario; it plays in my head every time I walk through a door that says 'Women'. It will happen to me someday, but up to this point, I've been lucky.

In her game dys4ia, Anna Anthropy wrote, "I feel like a spy whenever I use the women's bathroom." I know how she feels. When I enter a restroom, I immediately take stock of the situation. Is there a queue? I don't like to stand around; it gives people more time to examine me. Are there parents with kids in here? Mothers are often the most insistent police. The whole affair feels sadly, uncannily like a stealth game.

The affinities between stealth games and transgender experience run deep. In the transgender community, we even use the phrase 'going stealth' to describe living full-time without most people being aware of our transgender status or our identities prior to transition. We also talk about 'passing', a term we use to describe successfully interacting with others without being 'read' as transgender.

For trans* folks though, the consequences of failure are more dire than a Game Over screen. If the wrong people catch us we can be humiliated, detained, beaten, or murdered. A stream of heart-breaking headlines threatens to erode our already fragile foundations. For us, visibility all too often means violence. Not everyone can pass successfully; not everyone wants to.

I do not mean to suggest that passing is as inconsequential as playing a videogame for entertainment; rather, passing and stealth games occupy a shared mechanical territory and that they operate on similar principles. It is because of this curious affinity between stealth games and transgender experience that I find myself identifying with some unlikely heroes.