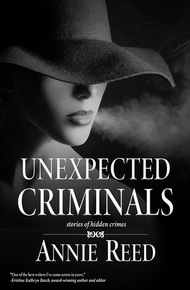 Quiet criminals. The kind you might not notice at first glance. Sociopaths? Killers in hiding? Or just someone with a long-buried secret?

Award-winning mystery writer Annie Reed brings these characters and more to life in this collection of stories that will touch your heart while they chill your blood.

The latest in Annie's Unexpected series, Unexpected Criminals takes you on a journey through the shadowy world of people with hidden secrets and double lives they'll do anything to protect.

The dead woman lay slumped over the steps leading up to the altar, head twisted awkwardly on the top step, arms hanging limp at her sides. Blood from the long gashes on her forearms had soaked into the carpet and begun to turn brown at the edges. She'd been there a while.

Russell sat on his heels behind the woman. He hadn't been to church in nearly twenty years, but he'd almost made the sign of the cross when he'd entered St. Bart's. The smell did it to him more than anything else.

Like the church of his childhood, St. Bart's was old and impressed with itself with its vaulted ceilings and stained-glass windows and long rows of wooden pews, but it was the smell of old sweat and tears mixed with the lingering odor of incense and aftershave and the kind of perfume little old ladies doused themselves with because their sense of smell was going that reminded Russell of Sundays spent going to mass with his mother.

His mother had been a devout Catholic until the day she died. Every week she made him stay after mass so she could light a votive candle for the dead while she said the rosary in front of a statue of the Blessed Virgin Mary. Russell had kept her rosary beads after she passed away, but he hadn't set foot inside a church since the day he'd lit a candle for his wife and realized it was a piss poor way to remember anybody.

Would anybody light a candle for this woman?

"Looks like we caught a suicide," his partner said.

Russell grunted. Vic Damonte had been a good cop once, but he was five years away from retirement and getting sloppy.

"Where's the knife?" Russell asked. The dead woman looked like she'd been kneeling on the bottom step when she pushed the sleeves of her sweater up to her elbows and took a knife the long way to the veins of both arms. By the second cut, the knife would have been slippery, her grip would have faltered. "If she dropped the knife, where is it?"

"Under the body, smart guy," Vic said. "This ain't a little girl we got here."

Vic meant weight, not age. Vic liked his women stick-figure thin. The dead woman looked early twenties to Russell. She had maybe an extra thirty pounds on her, but she'd been tall and she had probably carried the extra weight well even if she'd worn a bulky sweater over her jeans to cover herself up.

"Sharp knife," Russell said. He'd know more when the medical examiner got here and turned the body, but from where he crouched behind her, it looked like the cuts on both arms were straight and deliberate, no hesitation marks. It took a serious amount of determination to do something like that. Or someone else to do it. Russell didn't think they'd find the knife beneath her body.

Russell stood up, his knees creaking. The call had come in at seven near the end of their shift. Vic had mouthed off to the captain a couple of months ago, and the two of them had been stuck on graveyard ever since. Russell missed the sun. Middle of January, cold and overcast the whole damn time when it wasn't raining or snowing. He was sick of the dark and sick of being alone. Back when he'd been a beat cop working graveyard, his wife used to cook him dinner in the morning, and he'd have pot roast or stew or roasted chicken while they watched the sun come up. Winter hadn't seemed so bleak back then.

"I'm gonna go talk to the witness," Vic said. "You got the priest?"

Russell looked toward the back of the church. A small man dressed in black was talking softly to a middle-aged woman who sat huddled inside a woolen coat, the kind Russell's mother used to wear to church. Her head was covered with a scarf tied beneath her chin, the same way his mother had covered her own head when she was in the house of God.

"Take it easy on her," Russell said.

Vic smiled and spread his hands. "Don't I always?"