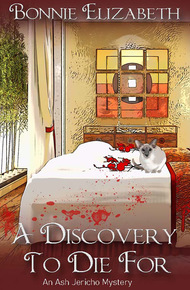 Like her writing, Bonnie has held a wide variety of unrelated jobs from veterinary receptionist to cemetery administrator to licensed acupuncturist. As a teenager, she once told the local librarian that so long as a job involved books or cats she'd be happy. Writing allows her to involve both of those.

Bonnie lives with her husband in Kentucky. The two of them are owned by three cats.

A Discovery to Die For by Bonnie Elizabeth

It's not just another day at the office.

No one wants to find a dead body on their doorstep, certainly not Ash Jericho. She's had enough of murder after her cousin died half a year ago.

Now, a dead woman waits outside Ash's new business. No one knows whether the woman was waiting for one of the business owners or if someone placed her there.

Finding out that the woman has tried to slander Ash's business puts Ash back in the investigator's spotlight. Once again she has to start sleuthing in order to clear her name.

With no shortage of suspects, Ash is going to have to use her psychic abilities and her friend Cheri's gossip hotline to figure out which of the people around them murdered the woman.

Soon enough, the mystery falls right back on Ash's doorstep.

A Discovery to Die For is a novel in the popular Ash Jericho series.

Just when I thought life was sorting itself out, I arrived at my acupuncture clinic to find a body in the parking lot.

I didn't realize it was a body, as in dead body, at first. It was just sitting there up against the metal support that ran between my office and the pizza place next door. I thought from the set of the body and the style of hair that it was a woman. Her head was angled funny, but when you find a body, your first thought isn't that they're dead. Not really. At least mine wasn't.

I'm Ash Jericho and I'm an acupuncturist in Seales, Kentucky. I was getting ready for a short day of treating patients—my practice was still new because I'd been living out of town for years—and had come around from the side where I'd parked my car. Normally the blacktop parking lot that overlooks the highway that runs from Seales to Frankfort catches an assortment of garbage overnight. I wanted to clean up before work.

It's one reason I go through the front, rather than the back. I also hate the stink of the dumpster back there. Fortunately, it's not right by my door or I'd have turned down the office. I'd had enough trepidation about setting up out here. I'd had this dream of a homey place downtown where the red brick buildings were all about three stories tall and narrow. Old houses sat just around the corner and most of them had been converted to commercial businesses. I'd had that sort of homey look back in the Northwest where I'd practiced before returning home. I had thought I'd get it again here, but nothing had opened up.

So, I'd grabbed this, an office in this newer little strip mall in front the big grocery store right on the highway. Visibility, you know.

Which was another reason it was weird to find a body there. People start grocery shopping early in Seales. We are a farm community, after all. Of course, the body was in the front of the office, not the back. There was plenty of traffic running along the highway and the noise of cars and occasional hoots from behind me kept me company as I approached the woman sitting there.

By that time, I was pretty certain she was dead, though I was still in denial. I mean, yeah, I smelled the faint traces of copper and something that reminded of a dirty diaper, but I wanted to tell myself that she'd just fallen asleep waiting for a pizza fix. Maybe she used drugs or something and was hungry?

Except there was a burgundy stain on the front of her shirt. I stopped walking and swallowed hard. I pinched myself. I stepped closer to her, careful not to mess up anything in the almost too-clean parking lot. I reach out a hand to check the pulse in her neck, hating the cool feel of her skin and the fact that nothing moved in her neck.

I pulled back, feeling gross, wanting to wash my hands, but instead I got out my cell phone and called the police. I used the emergency number, though I had the number of the detective that would probably get the case.

My heart started to beat a bit faster, not just because I was reporting a body but because I anticipated seeing Detective Byron Cabot. He was the main detective on the Seales police force and he got all the "big" cases, so to speak. Rarely murder, though I had met him when my cousin Marty was murdered. She hadn't been the only death at the time, but Byron had been the one person who hadn't decided I was the prime suspect, at least he hadn't acted like it.

I mean, yeah, I suppose the fact that Marty had challenged our grandmother's will leaving everything to me was motive but, sadly, I hadn't really cared. I was home and had planned to start up my acupuncture business no matter what. Unfortunately, my ex hadn't known that and had set out on something of a killing spree trying to make sure that I stayed in town.

I'd almost ended up a victim. I'd spent half a year getting over that and trying to rebuild a reputation that meant people would trust me with their health, and now here was a body in front of my clinic.

The woman sitting dead in front of the building had picked a pretty spring morning to die. Although if she'd been killed, perhaps she wasn't the one who had picked it? The sky was just pinking up over in the east, clear of any clouds.

I eyed the darkened windows of the other businesses in this little strip mall, while listening to a car that sounded like it needed a new muffler. A pale blue Honda CRV drove up the entry to the shopping area towards the grocery store and pharmacy. Beyond it sat the Burger King.

Around the corner was a McDonald's and a Bojangles. Taco Bell was a few blocks further up on a corner with just a gas station and its building. Seales is set for eating, so long as it's fast food.

I glanced back in my office, which was dark and I had downed the shades, leaving only a small crack for a bit of light. The tax preparation place looked pretty quiet too, which was a change from earlier, before taxes had been due. To the right was the pizza place which never had blinds drawn. They were always busy once they opened. I had worried about that at first, but I had talked to the chiropractor who had his office on the other side of the pizza place.

He'd suggested soft music was enough to drown out any sounds from the take-out place and it seemed to work just fine. I had a feeling I might move someday, but for now this worked. On the other side of the chiropractor was a pet store and a small salon where you could get your hair and nails done. I'd used them for my hair but did my own nails, though my friend Cheri thought their manicures were to die for.

Which was probably not the best description given the woman in front of me. Now that I was back to looking at her, I was surprised that I didn't recognize her. Seales is a small rural community and while I'd been gone to acupuncture school and then practicing in the Northwest for some time, I had grown up here. I'd been back for months and I'd been re-acquainted with a lot of old friends, yet I didn't recognize this woman's face.

Soon enough, in response to my call, a blue and white police car turned into the parking lot, coming just a bit too fast, not hitting the brakes quite enough, and the car appeared about to overturn. The driver, however, managed to avoid doing so, for which I was thankful. Nothing like having the police have an accident when you've called in a dead body.

I was also thankful because I had two patients coming in that morning. I didn't want to disturb their treatments because the police had been driving recklessly.

The car parked across three parking spaces right in front of where the dead body lay. I stepped over to the officer as he started to get out of his car.

"Stay back, ma'am," he said. I recognized Officer Gil Daffney. I talked to him back when Marty was killed and later on when her friend, Officer Claire Wilcox, had died. He was young, blond, rather handsome in that too young, almost innocent way. He was also, apparently, just a bit reckless when driving.

I waited while he got out of the car and looked at the body. He spoke into his radio and then stopped, looking at me.

"You found the body?"

"Can you tell me what you were doing here?" Gil took out some paper.

"I was about to open my office," I told him, nodding at the door of the acupuncture office.

"Are you a receptionist or something?"

"I'm an acupuncturist," I explained patiently.

Gil raised his eyebrows as if that was an odd thing. Maybe in Seales or wherever he grew up, it was. It certainly wasn't for me. Daffney might act like he was a Seales native, but I knew for a fact he wasn't. His family was from the western part of Kentucky, not the north-central area. Not that that was a problem or anything.

"Did you close up last night?" he asked.

"I did. About four. I didn't have patients scheduled after that." I suppose if I were good, I'd have sat around until five, hoping for a walk-in. Instead, I'd finished my appointments and the paperwork I needed to do and left.

"And there wasn't a body there then?" Daffney clarified.

"Nope," I said. "I'm sure someone at the pizza place would have noticed it," I said, helpfully reminding him that they were open until midnight, two in the morning on Friday and Saturday.

Daffney nodded and looked at the body.

"I don't recognize her."

"Really?" he looked at me like I was an idiot.

I shrugged. "Not been back for very long," I said.

"Layla Wiltshire, the herbalist?" Daffney said. "I'd have thought you two would have been great buddies?"

I shook my head, although a knot formed in my stomach. I had had online interactions with Layla and they hadn't been pleasant. She seemed to think that her background of reading up on herbs on google meant that she was as qualified to treat people as my degree made me. That did not go over well with me, particularly when she'd started telling people I was overcharging them for my treatments.

Her picture online was a picture of a cone flower, not a face, so I'd never seen her.

It wasn't going to do my business any good to have her dead on my doorstep.