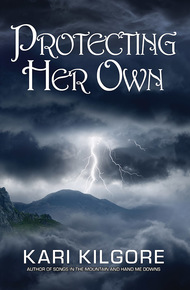 Kari Kilgore started her first published novel Until Death in Transylvania, Romania, and finished it in Room 217 at the Stanley Hotel in Estes Park, Colorado, where a rather famous creepy tale about a hotel sparked into life. That's just one example of how real world inspiration drives her fiction.

Kari writes first and figures out the story's genre later. This results in fantasy, science fiction, romance, mystery, contemporary fiction, and everything in between. She's happiest when she surprises herself. She lives at the end of a long dirt road in the middle of the woods with her husband Jason A. Adams, various house critters, and wildlife they're better off not knowing more about.

Protecting Her Own by Kari Kilgore

A month after returning to Lightning Gap, Virginia, Kim Mullins finally feels at home. Relaxed. Ready to recover from years of hectic city life and too many broken hearts. Steph Holfield needs the shelter of her family to heal. A dose of peace and routine. The abrupt end of her marriage left her reeling and shattered. Unsure of her own heart and mind.

Seeing each other sends Kim and Steph into a whirlwind of memories, and the enchanting prospect of rediscovering their spark. But more than the chance of renewing youthful romance swirls around them. Bringing unseen forces human and supernatural into play.

Will Kim and Steph find the strength they need to survive in each other?

Kim almost pushed the swing back too hard after all.

"I thought Steph got married?" Kim said. "Moved away with her new husband not long after I went to college in Atlanta?"

Auntie Venus took a drink of coffee, peering at Kim over the edge of her world mug. The kind of knowing gaze that would either discover everything or get you to say it out loud for her.

Kim fought revealing anything as hard as she could.

"She did get married," Auntie Venus said, tilting her face up and to the left like she always did when she was trying to remember something. "Went to school down in Texas, but she ended up with a local boy. From over in Laurel Gap if I recall. They went up to Louisville for a while. But she's been back here for several months now. Started teaching at the start of the school year."

"That is an interesting bit of luck. Both of us back here now after years away. Might be nice enough to catch up with Steph, see how life's been treating her. Just out of curiosity, did she bring the husband back with her?"

Auntie Venus shook her head. "She sure didn't. Seems to me she got all of that out of her system before she got too old. Some might say that's a smart move. In her case, I have to agree."

Steph closed her eyes for a second. Much as she treasured and fought for her privacy, especially about her years in Louisville, the school administration had a description of her ex-husband.

No possible way that could be him.

The neutral expression she always cultivated when faced with the unknown (and especially the potentially unwanted unknown) took a mighty blow when she opened the door, but held. At least she hoped so.

Waiting outside the door was one of the most potent ghosts out of Stephanie Holfield's past before Louisville. One she wasn't at all sure she was ready to welcome back into her adult life.

Kim Mullins, looking almost exactly as she had all those years ago in these same hallways. Thick waves of brunette hair falling around her shoulders, neat blue jeans and black button-up shirt. Huge brown eyes lighting up as they met Steph's, full red lips curving into a smile.

Steph wasn't ready for this particular ghost. Not one little bit.