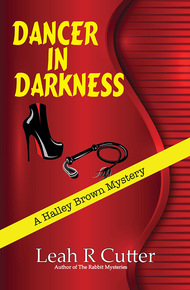 The LGBTQ+ community have no faith in the police. They want Halley to find them justice.

Halley wants nothing to do with the SPD, but has no choice as bodies start piling up. The police need the information she has from the community. They might even listen to her.

But sometimes, investigating one crime opens an even worse can of worms.

Dancer in Darkness—the first Halley Brown mystery—introduces a wide range of believable characters, a dark twisted plot, and a mystery that will keep you guessing. Come along for the ride, then stay for the secrets revealed.

It looked flawless from all angle, though Dancer's favorite view was from the back, of course. Dancer had spent hours perfecting the web of knots that tied the boy's arms behind him, a masterpiece of kinbaku. They had extended their artful knots to the noose around the boy's neck that hung him from the rafters above the stage.

The legs had presented a challenge. Dancer had put the boy's torn, bloody pants back on the body, and then used two bars with padded cuffs to separate them, a shorter one for the thighs and a longer one for the ankles. Dancer knew better than to hope that the audience would interpret their representation of frenzied dance correctly.

This stage was the biggest yet that Dancer had used. The Gemini Ballroom—an old dance hall that still held dances. The wooden floor had the perfect amount of give for dancing, and high metal beams for mounting stage lights. Dancer had spent weeks slowly accumulating their supplies backstage so that everything was set for the night of their big creation.

Dancer had created their first art installation in a tiny black box theatre just north of Capitol Hill, Seattle. For the second one, they'd moved up to an actual stage closer to the heart of the neighborhood, and now here. They'd yet to choose their next location. Should they use the Egyptian, the old movie theatre just down the street? One of the performance halls on the community college campus? Or would they move out of the Capitol Hill neighborhood and up to the U District, to one of the larger venues there?

Dancer would spend the next six months scouting locations and planning every detail, fantasizing about the next art installation, positioning the body, coming up with the perfect phrase. These were the high point of their genius, the meticulous crafting of the entire experience.

The kill was almost secondary, though still exciting. They probably would have to kill another submissive in between times, before the next big show. It would have to be another faceless victim, one no one would miss.

Those deaths were just practice. Every artist needed to practice their art. However, those bodies would be burned or buried—not displayed for all to see and marvel at.

Dancer had left their calling card as usual. They had titled this piece A Lynchable Lindy-Hop. Blood dripping from the body had already artfully splattered the paper. Next time, Dancer would have to give more thought to the pattern of the droplets. They'd stuck long knitting needles through the boy's cheeks, through his nipples, the fleshy parts of his legs, his penis, and elsewhere.

They grew more excited remembering the boy's howls when Dancer had first pierced his nipples with a specially sharpened darning needle. He'd already been tied by then, had fallen under Dancer's spell and cooperated.

They all did. They all wanted to submit, to be a part of Dancer's perfection. They just needed a firm hand. Most of them longed for the kiss of the flogger, the sting of the whip. They needed to only be shown once how to bend and pray at Dancer's feet. Gladly they gave up their agency to Dancer, their true and proper master, who controlled not only how they lived but how they died.

Another drop of blood spattered the stage, near the boy's driver's license that Dancer always thoughtfully left behind.

The boy had been a waste, his life quickly going down the drain. The least he could do was to die well for Dancer's art, to become something much bigger than himself.

Dancer knew that they had to be going. It was almost four AM. Corporate drones would start heading to their offices soon. Construction workers would begin to pour into the city from the suburbs, building more boxes for yuppies who would push honest laborers further out into the smaller towns surrounding Seattle.

Just one more drip. Dancer saw it forming at the tip of the needle piercing the boy's side. The droplet gained size, weight.

Just a few more seconds before it fell to the stage…