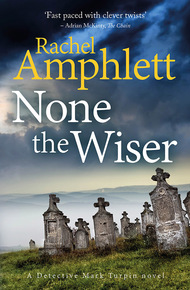 Before turning to writing,Rachel Amphlett played guitar in bands, worked as a film extra and freelanced in radio as a presenter and producer for the BBC.

She now wields a pen instead of a plectrum and is a bestselling author of crime fiction and spy thrillers, many of which have been translated worldwide.

A keen traveller, Rachel holds both British and Australian citizenship.

None the Wiser by Rachel Amphlett

What if some secrets were never meant to stay buried?

When a parish priest is brutally murdered in cold blood, a rural community is left in shock –and fear.

New to the Vale of the White Horse, Detective Sergeant Mark Turpin discovers the murder bears the hallmark of a vicious killer who shows no remorse for his victim, and leaves no trace behind.

After a second priest is killed, his broken body bearing similar ritualistic abuse, the police are confronted by a horrifying truth –there is a serial killer at large with a disturbing vendetta.

As fear grips the once tranquil countryside, Mark and his team race to uncover a tangle of dark secrets and lies before the killer strikes again.

In doing so, Mark finds out that the truth is more twisted than he could ever have imagined…

None the Wiser is the first book in a new murder mystery series from USA Today bestselling author Rachel Amphlett.

Seamus Carter dropped to his knees.

His voice was little more than a murmur, rising and falling with the rhythm of the prayer.

Exhaustion threatened, and he tried to take strength from the subtext, a momentary sense of calm easing the guilt that had gnawed away at him for days. He kept his eyes closed in meditation a while longer, savouring the tentative peace that enveloped him.

No-one would disturb him.

He was alone –the pub that stood on the other side of the boundary wall with his church had a live band playing tonight. He had heard the thumping bass line as he had been praying, and none of his parishioners were likely to visit at this time of night.

Easing himself from a kneeling position, he genuflected as he gazed up at the wooden crucifix above the altar, and then bowed his head in a final, silent prayer.

Seamus blinked, his trance-like state leaving him as soon as he moved away from the altar.

Despite his efforts, the self-loathing remained, and he scowled.

He stomped along the aisle towards the vestry, reached into his pocket for a bubble pack of antacids, then popped and swallowed two.

His thoughts turned to the Sunday morning service, and the uplifting sermon he was struggling to write.

The events of the previous week had shaken him, and he needed to excuse his fear.

Addressing the congregation would be a tincture, a way to soothe the wound that had been opened.

Crossing the remaining length of the nave, he pushed through the door to his office and sank into the hard wooden chair at his desk. It faced the wall, a plain wooden cross above his head.

The room had no windows, which he preferred. The setting enabled him to meditate upon his words as he crafted carefully phrased sentences to spread the word of his God.

He tapped the trackpad on the laptop, and, as the screen blinked to life, he manoeuvred the cursor over the music app, selected a compilation of violin sonatas, and closed his eyes as the music washed over him.

Two years ago, the church cleaner had entered the room and emitted a sharp, shocked gasp at the loud trance music emanating from the computer. After he'd calmed her and tried to convince her that, often, his best sermons were written at one hundred and twenty beats per minute, she'd continued with her dusting, although she'd eyed him warily. He'd resisted the urge to educate her musical tastes further with the progressive rock of 1970s Pink Floyd.

Seamus read through the words he had typed an hour ago, and frowned. He deleted the last sentence, cracked his knuckles and then stabbed two fingers at the keyboard in an attempt to convey the thoughts that troubled him.

Perhaps in sharing his own foibles, he would find retribution.

The stack of paperwork at his elbow fluttered as a cold breeze slapped against the back of his neck, and he rubbed the skin, his eyes never leaving the screen.

He would check all the doors and windows before leaving tonight, but now he had found his flow, the sermon was almost complete.

A shuffling noise reached his ears before he became aware of someone standing behind him, a moment before a rope snaked around his neck.

Seamus lashed out in fear, shoving the chair backwards. Terror gripped him as the noose grew taut.

A gloved hand slapped his right ear, sending shards of pain into his skull, and he cried out in pain as his assailant moved into view.

'There's money in the box in the filing cabinet over there. My wallet is in my trouser pocket.'

Before he could recover from the shock, his right wrist was fastened to the arm of the chair with a plastic tie.

His left fist flailed, then Seamus cried out as he was punched in the balls, all the air rushing from his lungs in one anguished gasp.

He panted as his left wrist was secured to the chair, and tried to focus his thoughts.

The words dried on his lips as he heard the warble in his rasping voice, the unsteadiness that betrayed the lie.

Eyes glared at him from slits within a black hood, but no words came.

Instead, the figure moved behind him.

Bile rose in his throat as the rope tightened under his Adam's apple.

His cry was instinctive, desperate –and useless.

Restricted by the rope around his neck, his voice was little more than a croak, broken and shattered.

He twisted in his seat, nostrils flaring as he tugged at the ties that bound his wrists to the arms of the chair.

He gagged, struggling to swallow.

Without warning, the rope jerked, forcing his chin towards the ceiling and burning his throat.

A single tear rolled over his cheek as a wetness formed between his legs, heat rising to his face while his attacker crouched at the back of the chair, securing the rope.

He had known it would come to this, one day.

The figure said nothing, and edged around his body, peering into his eyes before raising a knife to Seamus's face.

A gloved hand gripped his jaw, forcing his mouth open as the priest panted for air.

The blade traced around each eye socket, millimetres away from his face.

I don't want to die.

His eyes bulged as the knife moved to his cheek, his plea little more than a whimper.

Seamus gagged at the rope cutting into his neck, fighting against the pressure in his lungs.

A searing pain tore into his tongue, slicing through sinew and tendons before the knife flashed in front of his eyes, blood dripping from the blade, and, as Seamus's body convulsed, the figure before him began to speak.

'Forgive me, Father, for I have sinned…'