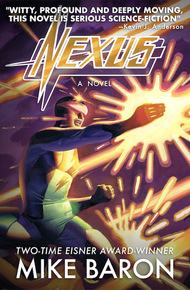 Nexus, the Cosmic Avenger, faces Gourmando, a vast, alien entity that consumes civilizations. Its herald Gnosis swoops the cosmos on a silver board seeding worlds to make them edible. While Gourmando threatens Nexus' home planet Ylum, Nexus is on Earth executing mass murderers. This is his job. Torn between his duties and the survival of his planet, Nexus must reach deep within himself to save Ylum.

Based on the bestselling comic series created by the award-winning team of writer Mike Baron and artist Steve Rude, this definitive tale of cosmic justice explodes from the imagination of the prolific author himself.

Nexus is the greatest avenger in history, but his power and purpose come from an alien race with their own agenda. Is Nexus hero or pawn? Deliverer or destroyer? God or devil? Discover the thrilling secrets in the latest incarnation of this space opera masterpiece!

As a comic book fan in the 1980s, I adored Nexus and Badger, two independent series written by Mike Baron. Decades later, when I saw that Mike had written a new Nexus prose novel, I knew it would be a perfect fit for the Space Opera Odyssey bundle. I trusted that this trailblazing author, who had been such an influential figure in reinventing space opera on the comic book page, would deliver a thrilling (and hilarious) experience…which he did, and then some. This is definitely a case where I, as an editor, was at least as excited as all you readers to dive into a brand-new work by a surprising and inventive writer. – Robert Jeschonek

Two years passed following the donning of the suit before Nexus figured it out. In that time, he assassinated fifty-two mass murderers. He spent countless sleepless nights trying to figure it out.

How? How was it possible? How could he shoot beams from his hands, render himself ephemeral, travel through space, and build castles in the air?

When he did fall asleep, he dreamed of mass murderers.

When he woke, he put on the uniform and took care of business.

After an assassination, he'd sleep fine, in a bed, for several weeks. Then the dreams began again and he would return to the tank.

He never stopped wondering how, exactly, he'd ended up there.

He'd constructed a thousand rationales. Ylum drew the murdered like a ghost murder magnet. Their ghosts flocked to Ylum like the swallows to Capistrano. And because the ghosts had no physical presence, they were not constrained by time or distance.

Horatio had always vowed to explore the ruins more fully, in hopes of finding some sign of the ancient civilization that had created this ghost murder magnet.

It was Sundra who saw it first. She'd gone down for peace and quiet. Ylum was a madhouse then, as it was now. As it always would be. It was Sundra who entered the vast underground chamber filled with the statue of an immense alien, its thorax decorated with the same lightning bolt that adorned Nexus' shoulder. She instantly made the connection between this grotesque idol and Horatio's childhood friends Alph and Beta. Seated, it was twenty-five feet tall.

She saw its chest rise and fall and realized that it wasn't a statue at all, it was a living creature. It took her fifteen minutes to get its attention, kicking its ankle and shouting, but finally, the thing looked down and said, "YOU ARE NOT THE CHOSEN ONE."

This creature who claimed to be the last of its race called itself the Merk and said it had decided to become the conscience of humanity, and that Horatio Hellpop was its chosen servant, just as Gnosis was Gourmando's, and that it had chosen Hellpop out of consideration of his own abilities and the sins of his father.

"I live here. I am the last of the Merk. When the Merk advanced into the plasma state, I remained behind to bestow the gift of omniscient justice on the most deserving or races. For millenniums, I found no races deserving of the gift."

No thanks, Sundra said, leave us alone, but by then it was too late.

After all. The Merk had known Horatio since he was a baby.

Now they had a deal. The Merk supplied Nexus with fusion energy from the heart of a star. Any star would do, although different stars gave off different qualities, and closer was better. The Heads could do the same thing. The Merk did not want Nexus dependent on the Heads, comprised as they were from a dozen different races.

The Merk continued to supply Nexus with all his energy needs if Nexus would eliminate one mass murderer every fortnight. Sometimes, Nexus let them pile up and then had to take care of a bunch at once, which wasn't that difficult, because they could often be found together.

Horatio wondered how the Merk stacked up against Gourmando. If the stories were true, it was no contest. Gourmando would have the Merk for lunch. Part of Horatio longed to see that match-up. When he first learned about the Merk, he'd been furious. How dare an alien—an alien! Choose him to be the conscious of his race?

Hey buddy! Thanks but no thanks!

On the other hand, he'd become accustomed, not to just the power of life and death but the power to create, to give hope to others, to build castles in the air. Like most of life, it was a trade-off.

As an autodidact and polymath, Horatio was intensely interested in the source of Gourmando's power. Did it draw from the stars, or was it internal, which raised questions about

Gourmando's molecular structure, and if it was indeed a sentient being, or some horrific program without self-awareness. How would Nexus stand up to Gourmando? Would they face each other with intense rays of cosmic energy as Horatio had done in the past? Did nearby stars flicker and burn when they battled?