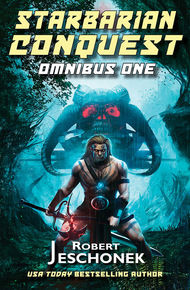 Barbarian hordes rule the fallen and desolate world of tomorrow. Horde lords Tork and Angar battle for control of what's left—until the high-tech Blacksmiths whisk them away to fight a war for survival among the stars. The barbarians' killer instincts and murderous skills are the last hope of defeating the conquering Caul—but can Tork and Angar stop trying to kill each other long enough to save the last remnants of humanity from extinction? In Horde's Challenge, book one of this special omnibus edition, Tork and Angar fight their first battle against the allies of the Caul, a battle that claims a terrible price. In book 2, Horde's Power, Tork struggles to survive on a savage jungle planet whose secrets could destroy the galaxy, while Angar stands against a mutiny aboard the battleship Hellcyon on its perilous journey to rescue Tork and strike a blow against the Caul.

Robert Jeschonek – One of the things I love best about StoryBundle is how it enables readers to preview new chapters of series long before they're released to the general public. This brand-new omnibus debuts, for the first time anywhere, Horde's Power, which is book 2 in the Starbarian Saga series. Grab this bundle, and you'll be one of the first readers to experience chapter 2 in the adventures of starfaring barbarians Angar and Tork, who must survive their own titanic struggles and cross vast distances to reunite and give the galaxy a chance at salvation from the threat of the terrible Caul. – Robert Jeschonek

Part One: Welcome to the Jungle

Jungleworld, 3 weeks after the Battle of Io

Lightning blazed nearby, flaring through the downpour of rain. It briefly lit the figure of a heavily muscled man with long blond hair crouching in the shadows of the emerald jungle.

As booming thunder followed the lightning, he watched his target—a beast that looked like a cross between a dark blue gorilla, a ram, and a porcupine, stalking through the dense brush. It stopped suddenly and raised its head, listening, its bright blue bulbous ears twitching.

The man with the long blond hair froze, but not out of fear. Fear was an emotion that never drove a barbarian Horde Lord under any circumstances, no matter the odds against him.

And he, Tork Gallgore, was just such a Horde Lord.

The beast snorted, shook its head roughly, and resumed stalking. It looked for all the world like a wild predator on the hunt, following only the evidence of its senses in pursuit through the trackless jungle.

The evidence of its senses and the boxy, palm-sized device with the glowing blue screen and gold buttons gripped in its clawed tentacle.

How many like that beast—a thing called a Narl—had Tork killed in the weeks he'd been on the jungle planet? How many scars did he bear on his body from the spines and claws and acid venom they wielded?

Yet the Narl kept on coming, always patrolling, always hunting. And if there had been some doubt, when Tork first arrived, about their role in the scheme of things on this planet, it was long gone.

It had died the first time Tork had seen one slaughter and devour one of the local villagers.

Again, lightning flared from above, illuminating the jungle. Tork squinted in the flash of bright light, trying to keep his eyes locked on the enemy…and quickly realized the Narl was gone. The huge blue creature had disappeared.

Heart pounding as thunder boomed, Tork flicked his head from side to side without catching sight of the missing Narl. He breathed deep, seeking the beast's characteristic rank scent…and found no luck that way, either.

He might have thought the Narl had simply vanished if not for the clenching of his gut. That feeling told him, as it had thousands of times before, that the danger had not passed, and his target was still close.

Cautiously, Tork took a step forward. He adjusted his grip on the curved handle of his battleaxe, keeping his fingers wrapped around it as tightly as he dared. The round, crimson gem between the blade and the spike was dark, waiting for him to push the button and fill it with power.

He took another step, all his senses fully engaged. Had they ever been so attuned back on desolate planet Earth before he'd come to this jungle world? He didn't think so.

Perhaps passing through the portal from Io weeks ago had changed him. Or maybe it was just that he hadn't stopped fighting to survive since arriving here.

Whatever the reason, he felt at one with the fierce new world…which was why the Narl shouldn't have been able to surprise him the way it did.

Roaring, the beast dropped down out of a tree, crashing onto him like a ton of solid rock.

As Tork buckled under the impact, the Narl's spines dug into the flesh of his shoulders and back, punching deep. Its ram horns bashed into the back of his head, and its tentacles wrapped around his chest, their thorny ridges sinking into his pectoral meat.

Tork realized he had scant seconds to turn the tables. As the creature's hot breath blasted his neck, he knew a jet of acid venom would not be far behind.

Thumbing the button on the handle of the battleaxe, Tork felt the weapon hum to life in his hands. With a roar of his own, he swung it up and back, punching the spike on its heel into the body of the beast on his shoulders.

The Narl howled in pain as the spike plunged into it, crackling with electrical force. Tork tugged on the handle, raking the charged spike through the creature's flesh and bone like a hot blade through butter.

As soon as the Narl fell away, Tork yanked the spike free and whirled, sweeping the weapon up over his head. The beast rolled over fast and wrenched its mouth open in a familiar, deadly pose.

But Tork didn't give it time to spew a jet of sizzling acid at him. Heaving the axe down hard, he cleaved the Narl's skull in half from forehead to chin. Both sides splashed into the mud, bubbling with the reservoir of acid that had been nearly ejected in Tork's direction.

As Tork wrenched the axe from the skull of the dead beast, electrical bolts crackled along its blade and spike, small scale twins of the lightning that again burst from the sky. Any acid that had touched the miraculous metal was neutralized and burned away, leaving the weapon pristine and ready to kill again.

Ready, in other words, to keep Tork alive another day, another hour, another minute in this most hostile environment…always in the hope that he might yet find a way home.