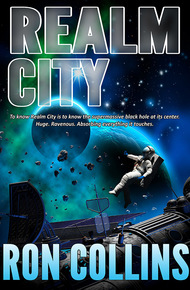 To know Realm City is to know the supermassive black hole at its center.

Huge. Ravenous. Absorbing everything it touches.

An ex-pilot, gone underground for more than a decade. A gene-cutting super-sleuth. A galactic business tycoon.

When the Kapari crime clan kidnaps a Caleb Zavier's niece, the dealing and double dealing has just begun.

In a world defined by Sagittarius-A *, the black hole at the center of their galaxy, and the wild civilization that has sprung up around it, the eternal questions are always these:

One of my favorite things about editing a bundle is getting to read brand new books by great writers before anyone else on the planet. That's why I couldn't wait to read the latest from Analog Science Fiction and Fact Magazine regular Ron Collins when it landed in my inbox. Ron's writing is always so exciting, fresh, and thought-provoking that I had no doubt Realm City would be fantastic…and it is. Super-sleuth Adrian Delanger races through an adventure in Realm City, a complex, colorful, and dangerous place located near the super-massive black hole at the heart of the Milky Way Galaxy. I loved this opening chapter in the series and hope Ron will soon write more tales in this setting with Adrian and the other remarkable characters in his orbit. – Robert Jeschonek

To understand bodies interlocking in motion. Office stations rotating. Space craft entering in trade routes. Transport gates. Living space carved of rock, built of metal and composite, walls bending from years in the wells of The Dark One's gravity. To see Realm City is to see hovels patched together. Derelict shuttle jumpers. Battle-damaged cruisers—shot-up relics of war abandoned to open space. To understand Realm City is to know gambling halls and gin dives thrown together in the out-regions. Markets. Brothels and shops and bars in the high-zones of the wealthy just as the line the empty veins of the dark areas where only the most disreputable denizens of what are, in general, considered the most disreputable denizens of the universe go.

Realm City is something greater than a gathering of derelict, grease-pocked hardware that ranges from centuries-old spaceships to mined-out asteroids and self-hacked space stations, each tethered into a floating pseudo-city in the nether-regions of space to orbit just far enough away from the gigantic black hole in the center of the Milky Way. To describe it is to describe life, clinging together to avoid being crushed into less than nothing.

To understand Realm City is to know gravity.

The freedom it provides, the pull of it on a human body and the fear the lack of such creates on the mind.

Stars, planets, and systems. Nebular clouds warping time itself. Tension for exploration, the drive of all creatures who live within it. The Dark One draws traits found in all species in every corner across the galaxy— Hulking Deneb. Scaley Kraggan. Smooth-skinned Terran, and the mystical Ejetterate Bai—their existence, their religions, power structures, and politics all wrap into a single thing that is Miraculous. Miraculous. Murderous.

To know Realm City is to understand docking and launching.

To know Realm City is to understand, above all, where one happens to fit.

Finally, to know Realm City is to understand the supermassive black hole at its center.

Huge and ravenous, absorbing everything it touches and spewing its amber and violet Hawking radiation into the cosmos like a beacon. Intense and ominous, billions of times more dense than any of the stars that comprise the galaxy around it.

The Dark One, denizens call it, though it is known by many other names across the many other civilizations scattered throughout that galaxy.

Sometimes, in the quiet of EVA, residents say they hear the beast calling.

Can hear it crying, can hear it screeching in its hollow, dry whispers.

In those moments are born stories of the Dark One's allure. Its pull, the feel of bony fingers curling around hands, the sensation of pressure in backs, the taste of darkness on the tongue.

In those moments, it is said, an entity can understand the entirety of existence.

In those moments, it is said, an entity can understand the meaning of life.