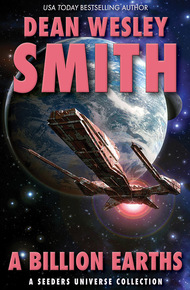 The people of Earth thought they alone represented humankind. But when Earth falls, the truth about the origin of the universe shatters that myth. And sometimes one answer only leads to more questions…

These five stories show different parts of the massive Seeders Universe and offer a taste of the Billion Earths that can be found in all the Seeders novels.

How do you keep your work fresh after writing hundreds of stories and more than a hundred novels? Ask Dean Wesley Smith, a mega-prolific author whose writing continues to surprise and delight readers around the world. I knew, when planning this bundle, that it had to include something from this master of space opera. Dean dug into his treasure chest and came up with this set of stories from his Seeders series, an epic adventure set against the backdrop of the Billion Earths. This collection of Seeders tales is so exciting, intense, and thought-provoking that it will stay with you long after you close the book and will make you want to read every Seeders adventure you can get your hands on, as soon as possible. – Robert Jeschonek

I love writing space opera. I must, since I wrote under my name (and other names) 35 different Star Trek novels over a decade. And had fun with almost every one of them.

The Seeders came from a Star Trek: Next Gen episode, actually, where Picard was at an archeological site and it was mentioned that a race they called The Seeders had planted humanoids on all the different planets millions of years earlier, which was why all the alien races were humanoid in shape.

Years later I remembered that and thought I would tell some stories from the Seeders' point of view. And what it would take for a race to do such a task.

And the idea just exploded for me from there.

Basically, the Seeders are long-lived humans who can teleport. Seeders' mother ships hold millions and are larger than most cities.

And they think nothing of moving from galaxy to galaxy. That was the fun of figuring all this out.

For example, our Milky Way Galaxy is a smallish spiral galaxy with from 200 to 400 billion stars. Millions and millions of those stars would be far enough away from the galaxy core to sustain life and be yellow stars and have a planet in the same orbit as Earth.

So the Seeders terraformed each planet and seeded humans and all the plants and animal life identical to the original Earth (that was in another galaxy), and then stuck around to help the humans all mature and take the same basic path into space.

I have now written a lot of Seeders novels and numbers of short stories. Some of these stories have been used to start a novel, but I wanted to gather the short stories here for the first time.

I plan on writing a lot more Seeders novels over the years. And do more short stories. The Seeders' ships flash past galaxies like they are fence posts, yet with the size of known space, the Seeders barely cover a tiny part of just our local cluster of galaxies.

And I have covered just a tiny part of the stories I want to tell.

Space is a very, very large place and the Seeders have somehow managed to spread the human race over billions of Earths in millions of galaxies, and they are still going.

And I am still writing their stories and having great fun. Hope you enjoy these stories as well.