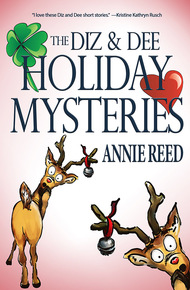 A light-hearted blend of mystery and fantasy, all served up with a healthy helping of holiday charm.

From New Year's to Christmas (and holidays in between), Diz and Dee investigate missing persons cases the way only a human precog and a gorgeous (if grumpy) elf can. Whether you're looking for Santa's missing stand-in, the New Year's baby momma gone walkabout, or a bird-napped Thanksgiving turkey named Simpkins, you've come to the right place.

Snuggle up with our favorite detectives and take a break from the stress of the season with these heartwarming holiday mysteries by award-winning writer Annie Reed.

I was having a non-argument argument with my partner about whether we should get a Christmas tree for the office when the front door opened and a whole passel of elves piled in.

Up front, I should tell you that my partner is an elf. A tall one. Broad-shouldered, pointy-eared, strong-jawed, and with the most drop-dead gorgeous blue eyes I've ever seen. You might be thinking Legolas from those movies, but Diz is more The Rock than Orlando Bloom. He even has The Rock's glower. The cinnamon and marshmallow-colored mullet, though—that's all Diz's own.

Yeah, I know. A mullet. But considering how great the rest of him looks, who am I to complain?

Together, Diz and I run a private detective agency called D & D Investigations out of a former bakery in a rundown neighborhood on the mainland side of Moretown Bay. I'm Dee, the other D in D & D. I'm not an elf. Or a dwarf. Or a fairy or any one of a hundred other kinds of magic folk who call the area around the Bay home. I'm a plain old vanilla human with curly brown hair that tends to frizz when it's humid, which is just about all the time. I also have a touch of precognition I've yet to learn how to control any better than my hair.

"You find missing people?" the nearest elf in the pack said.

I looked down at him. Unlike Diz, who's a good foot taller than my medium height, these elves were all way shorter than I am. I counted seven of the mini elves. They all wore variations of the same outfit: forest-green pants, red-and-green shirts that were more tunic than shirt, and red, green, or white scarves. The elf who asked me whether we find missing people had curly salt-and-pepper hair peeking out from beneath a red knit hat with a white pom-pom on top. They made the office look like a seasonal munchkin convention.

"Uh, yeah," I said. I resisted the urge to point to the lettering beneath the agency name on the plate glass window of our office—Missing Persons Are Our Specialty. We'd paid extra for that, but no one ever seemed to read it.

The elf behind the guy with the red knit hat elbowed him. "I don't care what you say, this can't be the right place," he said in a stage whisper I could hear fine even though his voice sounded like he'd just taken a hit of helium. "Just look at it."

The rest of the elves nodded and muttered among themselves. Except for the elf with the red hat, they all sounded like helium addicts.

I glanced over at Diz, expecting to see his everyday glower amped up to a killer scowl. My partner and patience aren't even on a handshake basis. Diz was born without that sense of serenity that's second nature to most wood elves. Stuff gets to him. He left his clan's home on Marlette Island years before I was even born. Life among the trees probably drove him batty. Lord knows why he puts up with me, not that I'd complain about that either. I know when I've got a good thing going.

One of the things Diz can't stand is a client who won't get to the point. Between the scowl and the lack of patience and the elven strength, Diz can be flat out intimidating. That's what made him such a kickass interrogator when we were both with the cops. Now that we're detecting on our own and can't afford to scare potential clients away, I do most of the initial interviews. I can be kind of a smartass, but at least I'm nice about it.

Most of the time.

But now, instead of having to deflect Diz from going into full scowl mode, I caught him in a near-grin.

The grin disappeared. "Am not."

I lifted an eyebrow. I'm not sure why my partner doesn't like to admit when he's having a good time, but far be it for me to let him get away with it.

Immediately, all the pint-sized elves in the office went quiet.

"What?" I said to the elves who were all giving me the evil eye.

"You are not Santa," the elf with the red knit hat said.

"No!" chorused the rest of the little elves.

"You don't even have any Christmas decorations!" said the little elf behind Red Hat.

The elves all nodded in agreement.

"I have this." I pointed toward the sad-looking little miniature pine tree in a candy-cane striped pot I'd picked up at the Asian store next to the office. The tree had little red ornaments wired to its spindly branches and a red bow stuck on one side of the pot. Even I had to admit it was lame as holiday decorations went.

That's why I wanted to put up a Christmas tree. Diz had pointed out that my sad little potted pine was a prime example of why I shouldn't be allowed around plants. I'd pointed out to him that Christmas trees were already pretty much dead, so anything I did to it couldn't possibly be worse. That's when his latent wood elf rose to the surface. Diz told me he refused to have a sacrificial tree ensconced—ensconced, mind you—in his office.

Did I tell you that back when we were both cops, I was the only one who could put up with him for more than a week at a time?

Of course, he was the only one who could put up with me for more than a week at a time, too. Maybe that's why we're still working together, although I'd like to think there's a little more to it than that.

"That," Red Hat said, pointing an accusatory finger at my poor potted pine, "is not evidence of the true Christmas spirit."

"What's the Christmas spirit got to do with why you're all here, anyway?" I asked.

"How can you find Santa if you don't have the Christmas spirit?"

I blinked. "Come again? You want us to find Santa? The Santa?"

"And we're running out of time," said another one somewhere in the chorus. "It's almost Christmas Eve."