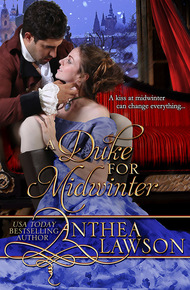 Anthea lives with her husband in sunny Southern California, where she's still warming up from three decades spent in the Pacific Northwest. In addition to writing historical romance, she plays the Irish fiddle and pens bestselling YA Urban Fantasy as Anthea Sharp. Her newest holiday sweet treat, The Duke's Christmas, is now available at all ebook retailers.

A Duke for Midwinter by Anthea Lawson

After a gentleman rescues her from a winter storm, Miss Selene Banning finds herself snowbound with Sir Jared Kendrick, who is not precisely who he claims to be...

The coach jolted, a rough sway to one side that made Selene Banning's lap robe slide off, taking her book with it. The lamp on her side of the coach guttered and went out, the wick foundering in its own oil. Selene scooped her book off the floor, then tucked it away. It was growing too dim inside the coach to read, and the story had not been able to distract her from the predicament she feared she'd placed herself in.

Her fingers, despite the fur-lined gloves she wore, were clumsy from the cold. The spatter of sleet against the windows made her shiver. She ought to have waited to depart for London, but when she, her companion Hetty, and the driver and footman had set out, the storm they were now fighting had been merely a dark smudge on the horizon.

"Are we nearly to the next town?" Hetty shot an anxious glance out the window of the coach. Nothing could be seen but their wavering reflections, backed by blowing gusts of icy rain.

"No doubt we are." Selene endeavored to keep her voice assured, though she had not been attending to their whereabouts. All she knew was that they had ridden through Downham Market some time ago, and that Cambridge still lay some distance ahead.

She stole a quick glance at the silver watch pinned to her bodice. Half-four, and growing darker outside by the moment. Foreboding pinched her breath.

"You must stay warm." Hetty retrieved the lap robe and tucked it about Selene's knees. "Wouldn't do to arrive in London for the holidays with a chill."

"I might say the same." Selene gave her companion a look, and Hetty tightened her shawl about her shoulders.

The companion was a decade older than Selene, but acted as if she were more than twice her mistress's age, bustling and clucking like a mother hen. Of course, she was used to fretting over two charges, not one, which meant that on this journey the brunt of Hetty's attention fell upon Selene. Her younger sister, Eliana, was already in London, by special request of the queen.

Golden-haired, lovely Eliana, who would certainly make a stunning match. She was as different from Selene as the sun from the moon. Compared to Eliana, Selene's thick brown hair was reduced to a mousey brown, her strong nose seemed overlarge, her eyes too melancholy. But truly, she could not be bitter. Eliana was too open-hearted and sweet to resent—though sometimes, in the deep of night, Selene lay awake and wished that her own features were not quite so unremarkable.

While she was wishing, she supposed she ought to be less firm in her opinions. Her unwillingness to compromise had lost her her first, and most likely only, offer of marriage. In the three years since, there had been no more suitors for her hand.

But she was who she was, and her future became more clear with every passing year. Eliana was the one who would wed a handsome lord, while Selene would retire to the country, tend to her horses, and adore her nieces and nephews as she carried on into spinsterhood.

If she managed to make it to London in one piece. Trying not to let her worry show on her face, she peered out the window again. The stretch of road was empty, with no habitations in sight.

She should have gone to Town with the family, not stayed behind to help with her favorite mare's foaling. She should have heeded the stable master's worries about the weather instead of overriding him with glib reassurances. She should have curbed her impatience, which had blinded her to the dark storm on the horizon.

Better to spend a cold and lonely Christmas at Banning Hall, despite the bleakness that had come over her in the past months. But oh, she had so wanted to be in London with her family.

The coach shuddered again and she heard the horses whinny in fright. She wrestled the window down and was rewarded with a faceful of wind-driven sleet. Shading her eyes with her gloved hand, which did little to mitigate the icy blast, she squinted. She could barely make out the hunched figure of the driver.

"Benjamin!" she shouted. "Is everything well? Any sign of a town?"

Her words were whipped from her lips, but the driver heard.

"Nothing, Mistress" he called back.

Mouth set, Selene closed the window. There must be a village soon, or at least a farmhouse where they might take shelter

The coach slewed violently and Hetty let out a shriek. Selene watched in horror as they tipped over. Her book banged against the ceiling and she braced herself, catching Hetty's arm as her companion tumbled past.

A sickening crunch, the high whinny of a horse, and the curtains caught fire from the flame of the remaining lamp. Hastily, Selene beat the fire out with her muff. The stench of scorched rabbit fur filled the air.