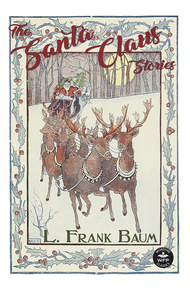 Lyman Frank Baum, known popularly as L. Frank Baum, was an American children's author best known for his Land of Oz series. Born in 1856 in New York, Baum worked variously as a playwright and actor, businessman, and newspaper journalist before finding his greatest success in his forties when he began writing children's stories.

Baum's first book for children was 1897's Mother Goose in Prose, a collection of stories based on Mother Goose nursery rhymes. His most famous and enduring work, The Wonderful Wizard of Oz, was published in 1900. In his lifetime, Baum authored more than 50 novels and over 80 short stories, many under pseudonyms such as Floyd Akers, Laura Bancroft, Edith Van Dyne, and Schuyler Staunton.

In November of 1882, he married Maud Gage, daughter of suffragist Matilda Gage. A known proponent for women's rights, he often worked his advocacy into his writings, including some of the Oz and Edith Van Dyne stories. Baum died at the age of 62 on May 6, 1919, following a stroke, in Hollywood, California. Glinda of Oz, the fourteenth and final book he wrote for the Oz series, was published a year later, in July of 1920.

Here in one volume for the first time are five of Baum's Santa Claus tales. Gathered from book, magazine, and Sunday paper, these are the stories that shaped the legend of the "Patron Saint of Children." Writing to entertain his own children, Baum also captured the imaginations of children everywhere with his images of Santa and his reindeer, stockings by the chimney, and a magical trip around the world in a single night.

Beginning with the short story "Little Bun Rabbit" (1897), first published in Baum's anthology Mother Goose Prose, readers get to visit Santa's workshop. Next is the well-known novel The Life and Adventures of Santa Claus (1902), followed by "A Kidnapped Santa Claus" (1904), originally published in The Delineator magazine. In an excerpt from the novel The Road to Oz (1909), Santa visits the Land of Oz for Princess Ozma's birthday, where Dorothy and Toto are also guests. Finally, from the Sunday comics pages comes the story "How the Wogglebug and His Friends Visited Santa Claus (1904).

The Santa Claus Stories of L. Frank Baum features many of the illustrations from the original publication runs.

Perhaps you will now understand how, in spite of the bigness of the world, Santa Claus is able to supply all of the children with beautiful gifts. To be sure, the old gentleman is rarely seen in these days; but it is not because he tries to keep out of sight, I assure you. Santa Claus is the same loving friend of children that in the old days used to play and romp with them by the hour; and I know he would love to do the same now, if he had the time. But, you see, he is so busy all the year making toys, and so hurried on that one night when visits our homes with his packs, that he comes and goes among us like a flash; and it is almost impossible to catch a glimpse of him.

And, although there are millions and millions more children in the world than there used to be, Santa Claus has never been known to complain of their increasing numbers.

"The more the merrier!" he cries, with his jolly laugh; and the only difference to him is the fact that his little workmen have to make their busy fingers fly faster every year to satisfy the demands of so many little ones.

"In all this world there is nothing so beautiful as a happy child," says good old Santa Claus; and if he had his way the children would all be beautiful, for all would be happy.

(From The Life and Adventures of Santa Claus, 1902)