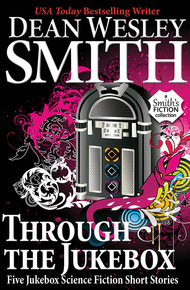 Through the Jukebox by Dean Wesley Smith

Dean Wesley Smith, famous for being one of the most prolific and wide ranging authors working today, draws on his library of science fiction stories to produce this collection of short stories from his famous jukebox series.

Through the Jukebox collects five of the award-nominated and bestselling stories. The collection opens with "Jukebox Gifts," a story of four friends getting a chance to change their own pasts as a Christmas present. The collection ends with "Black Betsy," a story about how a regular in the Garden Lounge uses the jukebox to not only meet Shoeless Joe Jackson, but to right a horrible wrong.

Discover why Dean's jukebox stories remain favorites of his many fans.

About forty or so years ago, I was tending bar in this place called The Moscow Mule (yes, the bar that invented the drink).

One fine spring afternoon a song playing on the jukebox caught my attention and yanked me back to a memory from about ten years before of a fun evening with a date.

It was a good memory of fun and laughter.

From the outside it must have seemed as if I had left the bar. One of the regulars sitting at the bar finally said, "Earth to Dean."

I was that far gone into the memory.

So as a writer who had sold a few short stories at that point, I figured what a fun idea that would be, to have a jukebox actually take a person out of a setting and back to the memory for the length of the song only.

I know for two minutes or so I wouldn't have minded going back to the memory associated with that song.

The key to the idea was that the person traveling back into their younger self had their future memories and could change the memory and thus change the future.

(I liked my old memory, no desire to change anything, but we writers tend to twist things.)

So off I went later the next day to my trusty electric typewriter.

I remember I wrote that first attempt at a jukebox story and immediately ruined it by rewriting it to death. (I was in that phase of my learning at that point. And copies of that story are long gone, burnt up in a house fire.)

A year or so later I tried another story with the idea.

All form rejections and I honestly didn't feel like I had done the idea justice.

Five years later I tried again. This time the story sold to Twilight Zone Magazine but came out in its sister publication Night Cry Magazine.

I still didn't feel like I had done the idea any justice at all, so I tried again.

The next attempt turned out the story "Jukebox Gifts," the first story in this collection. It sold to the Magazine of Fantasy and Science Fiction.

From there I kept writing jukebox stories. And they kept selling.

One point that bothered me along the way was that I never once knew the origin of the jukebox. I would try to figure it out and always fail. So I just wrote the stories with the characters not knowing how the jukebox did what it did.

Finally, two years ago, forty years after I came up with the idea, I wrote a novel in my Thunder Mountain western time travel series that ended up being the origin of the jukebox. Finally I figured it out.

The novel is called Melody Ridge: A Thunder Mountain Novel and is in Smith's Monthly #21 and is also out as a stand-alone novel if, after reading this collection, you are interested in how the jukebox was built.

For me, a simple idea blossomed into twenty or so short stories and then a novel over forty years of time.

I hope you enjoy these stories as much as I enjoyed writing them over the years. And I hope as time goes on there will be more jukebox stories. Even after forty years, I'm sure not tired of the idea.