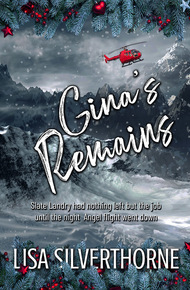 Lisa has published over 100 short stories in the fantasy, science fiction, romance, and mystery genres. Her short fiction has appeared in dozens of professional publications including: DAW Books, Roc Books, Prime Books, and WMG Publishing. Lisa's novels and many of her novelettes and short stories are available online. For more information, please visit her website at https://www.lisasilverthorne.com.

After his wife died, all Search and Rescue professional, Slate Landry had left was the job. And even that had faded. Until the early morning hours of Christmas Eve. When the Angel flight went down in the Cascade Mountains. Knowing the area like his own backyard, Slate was the best man for the job. Hoping that maybe he could be someone's Christmas Day miracle.

"Moving in to search for survivors and turn off locator beacon."

"Roger that, Landry. Be careful."

Using a telescoping avalanche probe, Slate checked snow depth and then took careful steps across the snow pack toward the plane. The helo's beacon still illuminated the wreckage.

Some of the small plane's lights winked red in the snow, pale green and gold glow of the instruments still visible. An eerie silence clung to the wreckage now that the helo had moved to a higher altitude. The hush of snowfall and whisper of wind blew across the quiet mountain, only the sound of his breath audible.

It was like the entire world had stopped turning.

The plane was mostly intact. Its nose was smashed against a rocky outcrop, wings snapped off and lying beside the wreckage. One of the doors was open, tracks leading away from the craft, stopping at the body. The remaining windows were covered in snow.

In the distance, a wolf howled.