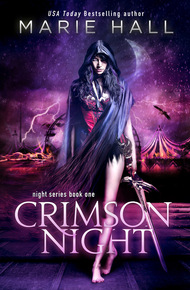 Marie Hall is a NY TIMES and USA Today bestselling author who loves books that make you think, or feel something. Preferably both. And while she's a total girly girl and loves glitter and rainbows, she's just as happy when she's writing about the dark underbelly of society. Well, if things like zombies, and vampires, and werewolves, and mermaids existed. (Although she has it on good authority that mermaids do in fact exist, because the internet told her so.)

She's married to the love of her life, a sexy beast of a caveman who likes to refer to himself as Big Hunk. She has two awesome kids, lives in Hawaii, loves cooking and occasionally has been known to crochet. She also really loves talking about herself in the third person.

Welcome one and all to Carnival Diabolique- or what I affectionately like to call, the carnival of the damned. My name is Pandora, and though my face might not look familiar to you, you do know me. I'm a Nephilim. What does that mean? I'm half demon, what's my other name? Lust. I'm the dark craving that drives you mad, makes you want, makes you reckless and stupid. I'm the drug you'll do anything to get your hands on. But I'm not all bad. I fight for light, for goodness and truth. I love my job, killing vampires and werewolves, zombies, and freaks... it's what makes me happy. But people are starting to disappear and lately I've felt a dark presence lurking around me. I think it might be a death priest and that's really bad. There isn't much a demon like me fears, but I fear them. This should have been easy, me killing the fanged freaks, getting rid of my pesky priest problem, but I'm about to be betrayed by the one person I thought I could trust with my life and before the night is through I'll be covered in crimson...

What do you get when you cross the Carnival Diabolique – the carnival of the damned – with a Nephilim named Pandora? Marie Hall's Crimson Night, of course! I was sold when I learned that the main character is a demon of lust that fights for goodness and truth and I know you will be too! – Joseph Nassise

He stepped away from me, it almost appeared involuntary.

Again he wore that cold expression I was quickly learning to hate.

"You arrogant bastard," I snarled, "you think you're no different than me? Fool yourself if you want to. Judge me all you want, but you know it's true. Go ahead, priest, kill me. And I promise to sit here like a good girl and take it." I tilted my head to the side, my hair slid across my breasts. "But this offer is only good for the next minute. So you think about it real good, because I promise you, it will never be this easy again."

He stared at me as if I were something unexpected. An oddity he was both repulsed by and curious about.

"Why did you let us leave earlier?" he asked in a voice so low I almost hadn't heard him say it.

"I keep asking myself that same question." I narrowed my eyes. "What do you think I am, Priest?" I don't know why I asked that.

"Evil," he said without skipping a beat. "You are pure sin."

Spoken like a true fanatic. He had no idea. I don't know why, but it made me sad.

He was inching closer again. If he kept it up I was gonna show him just how evil I could be.

"That's right." Again, my answer seemed to surprise him. "I am. I kill. I screw indiscriminately. Is that what you want to hear?"

His mouth contorted with disgust, as if hearing me say it only confirmed the monster he thought I was. "I should kill you."

Out of nowhere, a knife materialized in his hand. It hovered inches from my neck.

I pressed my neck into the tip of the blade. The cold steel seeped into my flesh and made me tremble.

"Then do it now, or stop wasting my time." I looked up at him and the movement caused the sharp blade to nick me. It was a shallow cut, nothing dangerous, but it did make me bleed. A thin ribbon of crimson pooled on the silver.

He looked at it and I could see the tension in the rigidity of his shoulders, the small tick under his right eye. He wanted to do it. So what was stopping him?

I was taking a very calculated risk here. Did I really want to die? In the past, maybe...but not anymore, I knew who I was. Was secure in myself. My pulse hammered violently in my neck. I didn't know him, but I also didn't think he'd do it.

It was a flicker in his eye. The way his body was so tense, so angry. Like he wanted to, but just couldn't. Over the years I'd developed a few tricks, one was that I could read people and not just based off body language, but it was almost like feeling someone's thoughts. Tasting their moods. Anger was spicy, lust decadent, fear greasy. Billy tasted like a chili pepper dipped in dark chocolate.

Very interesting. I licked my lips.

Seconds seemed like hours. I stared at him, watching the lines of his muscle twitch from the strain of holding himself back. The minute was nearly up and with each passing second I knew not only wouldn't he, but he couldn't.

Priest could have done it when I was outside with my back turned.

No, he wanted me alive. Of that I was sure. Why? I had no idea. But I was going to find out.

He growled, threw the knife away, and walked off. The knife clattered when it hit the kitchen floor. I released the pent up breath I hadn't realized I'd been holding. I wasn't a gambler, but right now I felt like I'd just won the jackpot.

He was at the door when I asked, "Where are my boots?"

The cat was out of the bag, he knew who I was and I knew why he'd taken my shoes off. Every neph was born with the mark, either on their left or right ankle. Not all marks were similar. Mine was in the shape of a shredded moth's wing on the inside of my right ankle.

He'd taken my shoes off to make certain I was neph.

Stopping mid-stride, already halfway out the door he turned toward me and his lip curled. "See you around, neph."

There was an unspoken promise in that sentence. This would only be the beginning of more. His eyes roamed my face and I licked my lips at the quiet intensity in that gaze. I'm not sure what happened between us. I couldn't understand how a Pontifex Mortus, trained to kill neph's at any and all costs would choose to walk away from a sacrifice that had looked willing.

But something had happened, and whatever it was, would forever alter the tenuous balance between good and evil.