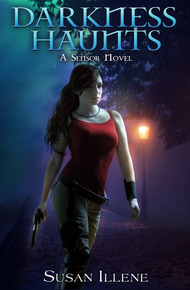 Instead of making the traditional post high school move and attending college, Susan joined the U.S. Army. She spent her eighteenth birthday in the gas chamber...an experience she is sure is best left for criminals. For eleven years she served first as a human resources specialist and later as an Arabic linguist (mostly in Airborne units). Though all her duty assignments were stateside, she did make two deployments to Iraq where her language skills were put to regular use.

After leaving the service in 2009, Susan returned to school at the University of Oklahoma to study history with a focus on the Middle East. She no longer finds many opportunities to test her fighting abilities in real life, unless her husband is demanding she cook him a real meal, but she's found a new outlet in writing urban fantasy heroines who can.

Melena Sanders faced her fair share of danger with insurgents and terrorists when she served in the U.S. Army, but now she is about to go up against a new threat. Her best friend, Aniya, has disappeared while on a trip to Fairbanks, Alaska—a supernatural haven. Most humans have no idea darker races lurk amongst them. Mel knows better. If she wants to get her friend back, she's going to have to go in alone—but not unarmed.

Melena has a few special skills the Army didn't provide, but the odds are still against her. She's got to come up with a plan fast that doesn't involve her, or her friend, dying. But danger likes to play it rough. A war for power is about to rise in Fairbanks and if she wants to get Aniya back, she's going to have to step right into the middle of it.

Take a stroll through Amazon's Dark Fantasy bestseller list and you'll find every single one of the books in Susan Illene's Sensor series. Darkness Haunts (currently #5 on that list at the time of this writing) kicks things off in high style and is a terrific introduction to this action-packed series. Melena Sanders is one tough character and she handles the supernatural world of Fairbanks, Alaska with grit and determination in equal measure. – Joseph Nassise

I didn't make it outside in time. The sups pulled a late-model, black BMW into an empty parking spot right in front of the bar. My SUV sat three spaces past it. I kept walking.

Please don't let them notice me.

"Hey, pretty lady," the driver said. The only vamp in the group had to be the one to notice me. He stepped right into my path.

Avoid the eyes or he'll know.

I stared at a small stain on the collar of his brown suede jacket. Dried blood?

The two werewolves snickered. "You can take that one for yourself, man. We're going inside."

Rock music spilled out as they opened the bar door. I didn't look back. The vamp in front of me held all of my attention. He appeared to be in his mid-twenties, but was actually closer to thirty. He'd been undead for about five years. I could take him…probably.

My hand itched for my gun, but I remembered Wanda's words from long ago. "Melena, don't ever bring a gun to a vampire fight. You'll get one shot off before they kill you."

I put my hands in my pockets. "You wanna get out of my way?"

"Why don't you look at me, pretty lady?" Yeah, because that would be such a good idea. He was too young to compel anyone with his voice. In another few years he'd have that skill, but not yet. He had to use the eyes for now.

I continued to stare at the stain on his jacket. He had hurt an innocent human. For all I knew it could have been Aniya. I clinched my fingers around my pocket knife. This guy had to be handled very carefully.

"Get out of my way," I said through clinched teeth. "I'm not interested."

His hand shot out to wrap around my throat. I flinched, but his grip wasn't so tight I couldn't breathe. Dead prey made bad meals for vampires.

"Look. At. Me." He forced my head up, but I kept my eyes averted. In my hand, I flipped open my knife and pressed it hard against the bulge in his pants. The tip didn't go through, but the threat was clear. He loosened his grip on my throat enough so I could speak.

"Back the fuck off," I said, "or else this is really going to hurt." Some people think the bigger the knife, the better. If used properly, a three inch blade could be every bit as effective.

I smiled and held up my weapon. "Go inside before I change my mind and use this anyway."

A muscle ticked in his jaw. I thanked God he was too young to be a real threat. He hesitated a moment longer before making a move to pass me. I stepped aside, giving him plenty of room. My knife stayed up where he could see it.

He tried to catch my eyes one more time. He kept going when it didn't work. I'd had years of practice keeping my eyes averted when vamps were around. It had kept me alive, though I preferred to avoid them altogether. One day, I'd run into a vampire who wouldn't forget he could heal from a knife wound—even if it was pointed at his groin.