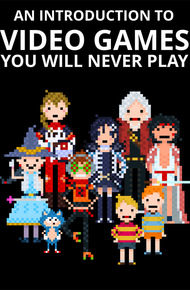 An Introduction To Video Games You Will Never Play by Unseen64

Part of a gigantic retrospective of the 'unreleased games' site that's going to be published across multiple Storybundles, this intro has some great interviews with classic game creators & preservationists. – Simon Carless

This is a delicate topic in investigative journalism, but it's something that could be overlooked when talking about researching video games. While it's quite clear to the Unseen64 staff and to most of our main contributors that sometimes sources have to be left anonymous to be able to receive info, screenshots, videos, or even playable builds of cancelled games, there is still a minor number of people that never thought much about the importance of privacy in our field. This may be partially due to the conception that if some information lacks a public source then it is must be false, which as you can imagine is far from accurate. Guaranteeing the anonymity of sources is one of the most important ways to ensure the preservation of a few lost games that would have not been saved in any other way.

Say there's a former developer that worked on an ill-fated project who wished to share some info, screens, or videos with us. Due to the potential for trouble from the studio for sharing this knowledge, the developer would like to remain anonymous in exchange for the information. Though this may seem like a rare occurrence, it happens more than you would think. Often major companies make their employees sign a non-disclosure agreements (NDA), which allows the company to prosecute an employee who reveals insider information on projects without approval. After all, videogames (especially AAA projects) are a product made to be sold in an economic market with thousands of competitors, forcing companies to protect their property however they can.

Even old lost games could be seen as current intellectual property to protect if the company believes that certain elements could be resurrected in future projects. Other times there are no legal NDA's involved, but people that worked on the project still may prefer to remain anonymous, just to be safe. There are times in which everyone is fine with sharing info and media from cancelled games for a variety of reasons. Sometimes it's because the project is so old that no one cares anymore, sometimes it's because the original studio that owned the IP is long gone, other times it's because it was just a small game from an unknown team, and rarely it's because the company is simply open about their unreleased projects.

Naturally, it takes time to earn enough trust to ensure someone that what they share will remain anonymous. Most developers would not give sensitive documents to random kids on the "internetz." By starting our archive work in early 2001, Unseen64 was able to build up a long history of trusty relationships with developers. In 15 years we talked with many people that worked on videogames and almost all of them understood the importance of preserving memories from their unseen projects. Initially it was a leap of faith, as we were still a mostly unknown website lead by Italian nerds, but people eventually started to recognize what we did and helped us archive more and more lost games. By not revealing who shared some of the most sensitive details with us, developers learned that we were able to keep the anonymity we promised.

Sometimes we also receive documents from anonymous emails that lack any indication of who sent it. The important thing is that we receive those details, screens, and videos from games that could have remained lost. In these cases, we just have to do some parallel researches to confirm the credibility of the info and then archive it in the best way possible. When someone feels that it's important or interesting to save some memories on games that will never be, for whatever reason they have, then it's just a matter of them getting in contact with us. We should also not forget about all the times in which we directly contact developers, asking them about some of the cancelled games they worked on, while trying to explain our archiving process and the potential for anonymity if needed. If they reply (which they hopefully will), any information is only a few questions away.

While it could be more difficult for traditional investigative journalism to decide whether to use info from anonymous sources, for video games it's almost more practical. Why would someone spend their free time to build an intricate story about a lost video game, make fake screenshots or even fake videos? There are no important economic or political reasons to do something like this, if not just for the "LULZ." And even then, the effort is not worth the payout. But of course, this has occurred a few times here at Unseen64, though it was not much of a problem: half of the time it's blatantly clear that it's just a joke, while the other half of the time it's just a matter of waiting for real developers that worked in the presumed title to comment on the fake info.

If the latter will never happen, then we'll just have archived another curious vaporware that never really existed and will never be, like a lot of projects announced for the Panasonic M2 or the Game.com. It's unfortunate, but it's extremely difficult to fact-check false information on a cancelled game that lacks any serious information in the first place.

We also should briefly talk about what's often referred to as "off-the-record" information, or in journalism terms information that is shared "unofficially, in confidence, not for publication". Yep, we also receive this kind of info, and we must refrain from publishing it. But how could something that cannot be shared help to remember lost videogames? Well, there are different cases. For example, we could be provided with the private email of someone that could share more info, they could send us some details useful to uncover related facts, or explain why it's important that we would never reveal something we found, or they could lend a playable prototype in order to help write an in-depth article but cannot be leaked because of serious legal issues.

These things happen more often than you would expect, and it's even more important that all of this remains private so we can continue to preserve the lost games of the past. As it happened in the past that some external collaborators did not follow the correct research guidelines, respecting developers and their work, I try to keep the Unseen64 staff as small as possible, with half of it made by old time real life friends. Even then, the articles and their respective sources are reviewed and analyzed before publishing it on the site, just to be sure that everything was acquired in the right way.

Preserving lost games is not just about finding info and putting it online; it's about knowing when and how it's best to make something public, to be able to research even deeper, to protect sources, to earn even more trust, and most importantly, to save games that would not be preserved in any other way. So, is it worth it to ensure anonymity to save the memory of lost videogames? For the Unseen64 staff and myself, absolutely.

There are countless of examples in which the trust we've obtained by keeping anonymity of sources has helped us gain more insight and info on cancelled games, effectively allowing us to preserve them throughout time. Sure, they may have been information that we were forced to keep private, but we were still able to archive much more than what was previously available. If we continue to keep building a long history of trust and anonymity, we can only imagine that this will be even more true in the future.