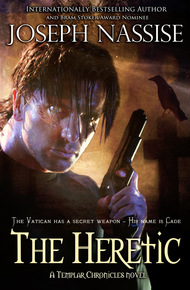 Former SWAT officer Cade Williams is no ordinary man. A chance encounter with a powerful supernatural entity left him possessed of certain unique abilities, such as the power to cross between the lands of the living and the dead. Now he commands the Echo Team, a special ops squad of modern Templar knights, and the things they hunt are far darker and much deadlier than the criminals that he used to face.

Echo's latest mission has the squad facing off against the Council of Nine, a group of necromancers determined to seize the Spear of Destiny: a legendary relic whose powers they hope to twist to their own ungodly ends. Cade and his men cannot allow this to happen, no matter the cost, for the results would be too horrendous to imagine.

But the necromancers are allied with the same demon that left Cade for dead five years before, a creature so powerful that the Templars know it simply as the Adversary. In order to keep the Spear from falling into enemy hands, Cade is forced to face not only the personal demons deep in his heart, but the very creature who put them there in the first place.

When the scene solidifies once more, he finds himself standing in a cemetery. Large, carefully sculpted angels adorn the nearest of the gravestones, with only the word Godspeed carved beneath them. Older, more decayed stones decorate the other burial plots nearby, but he is not close enough to see the details etched there.

A sense of urgency grips him in its bony fist.

It forces him into motion, and he sets off across the lawn, winding in and out between the stones, letting that feeling guide his passage until he sees a small plot set off from the rest by a white picket fence. In the strange twilight, the rails of the fence gleam with the wetness of freshly revealed bone. The coppery tang of blood floats on the night air.

As he moves closer he can see that the earth on the other side of the fence has been freshly disturbed. A grave lies open, a gaping hole in the peaceful sea of green grass that surrounds it, filled with a darkness deeper than that of the night sky above. This intrusion of the landscape and of the sanctity of the place draws him closer still, pulling him in toward it the way a fly is coaxed into a spider's web.

He stops just short of the small fence and gazes down into the darkness of the grave.

Unable to see clearly, he places one hand on the fence and leans forward, straining to get a better look.

Something moves down there, a furtive motion.

Beneath his hand the fence begins to twist and turn, tumbling him forward toward the darkness of that open grave, just as two eyes gleam hungrily from that inky murk . . .

Cade awoke in the darkness of his bedroom, his heart pounding and his body slick with cold sweat. He lay still for a moment, gathering his breath, and reached out for the phone in the second before its shrill ring pierced the silence of the bedroom.

"I'm on my way," he said into the receiver, then hung up before the startled novice placing the call could explain the reason for the late-night summons.