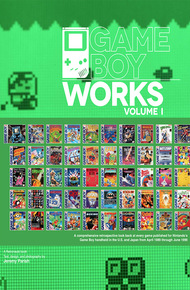 Game Boy Works examines the system's software library in chronological order, beginning here with the four launch titles from April 1989 through the end of June 1990. Every game Nintendo and its partners published for the system in the U.S., Japan, and Europe is explored here in full detail. From timeless masterpieces like Tetris to forgotten import obscurities like Card Game, this first volume of Game Boy Works details the games that defined road trips, vacations, and waiting room sessions for millions of kids (and adults!) throughout the '90s.

Reading a Jeremy Parish book is like a jolt of nostalgia straight to this old-school gamer's heart. His tour through numerous beloved and relatively unknown titles for the Game Boy—particularly Boomer's Adventure in ASMIK World, an old favorite I hadn't thought of in years—is as edifying and deeply entertaining. – David L. Craddock, curator, StoryBundle

To fully appreciate the nature of the Game Boy hardware, it's important to understand what had come before Game Boy. The idea of portable gaming certainly didn't spring full-formed into existence the day Game Boy launched. Various toy companies had been dabbling in the concept since the '70s, including Nintendo.

In fact, it's hard to say where to draw the line for the true first handheld game—which was it? The earliest portable systems hailed from toymakers, which makes a certain amount of sense; there's a pretty clear line of continuity from mechanical or gravity-powered toys to Game Boy. Nintendo itself had a lengthy history with handheld amusements. Many of those had been designed by the late Gunpei Yokoi, the R&D1 division chief who oversaw the creation of this system.

When you use a simple toy in which you try to shoot ball bearings into a hole move a plastic car across a scrolling strip of paper, you're holding the blueprint for Game Boy. The advent of inexpensive, compact electronic components eventually allowed manufacturers to cram LED lights into these devices. Then, simple circuits and LCD art. After that came legitimate computer processors. That includes the Game Boy's CPU, which was based on the processors that powered the PC revolution of the late '70s and early '80s.

As a herald of these advances, Game Boy's hardware wasn't especially impressive, even in 1989. Milton Bradley had produced the first-ever LCD-based portable to run on interchangeable cartridges back in 1979, a full decade before Game Boy's launch. Their MicroVision had been agonizingly primitive and tremendously expensive, but it helped lay the groundwork for portable consoles with interchangeable cartridges and LCD matrix screens.

Yet Microvision faltered, while Nintendo found success a couple of years later with the Game & Watch lineup. These were dedicated LCD handheld units that cost roughly the same price as an Atari game cartridge: A complete game and system in one.

The next cartridge-based handheld to enter serious production came from a Western company, Epyx, though their "Handy" portable wouldn't see light of day for nearly three years after its inception, when Atari bought it up and marketed it as Lynx. Game Boy managed to beat Lynx to retail by a matter of months, but the close release of the two systems makes for a telling study in purpose and philosophy. Game Boy ran on a puny processor and its screen looked awful compared to Lynx's illuminated, full-color offering. But those failings worked to Game Boy's advantage, allowing Nintendo to offer it for less than half the price of the Lynx—and with relatively low battery consumption, too. SEGA's Game Gear would improve on Lynx's tech in 1991, but it too would fall afoul of both its up-front cost and its high power consumption.