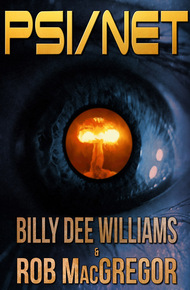 William December "Billy Dee" Williams, Jr. (born April 6, 1937) is an American actor, artist, singer, and writer best known for his work as a leading man in 1970s African-American cinema, in movies including Mahogany and Lady Sings the Blues, and for playing the character of Lando Calrissian in the movies Star Wars Episode V: The Empire Strikes Back and Star Wars Episode VI: Return of the Jedi.

Rob MacGregor is an Edgar-winning author, who has been on the New York Times bestseller list. He is the author of twenty novels, and eighteen non-fiction self-help books. He writes both adult and young adult mysteries, adventure, and science fiction/ fantasy. He's best known for his seven Indiana Jones novels. He has worked with George Lucas, Peter Benchley, and Billy Dee Williams.

Former Air Force Major Trent Calloway just wants to forget about his past, especially the tragedy that changed his life when he was involved in a government remote viewing project. With his marriage ruined in the aftermath of his psychic spying, he wanders the Southwest, occasionally guiding river rafting tours. And then suddenly his painful past returns and threatens to damage him again.

He finds out that he had been drugged during his remote viewing sessions and that now, years later, the drug is causing ever increasing side effects in himself and the other former government psychic spies. Astonishingly, their psychic abilities are expanding at frightening rates.

He realizes that the unknown drug has bound them all together in a deadly psychic nexus, a "Psi Net." Callaway must not only fight for his life and his sanity, but he must stop a plot to destroy the U.S. capital and wipe out the country's leaders.

Rob MacGregor is another one of those writers I’d been reading forever without realizing who he was, having devoured his Indiana Jones novels from the Last Crusade on through the Peril at Delphi to the Genesis Deluge and Interior World. But he’s so much more than that, he’s an Edgar Award winning novelist for one, and has teamed up with George Lucas, Peter Benchley (Jaws) and Billy Dee Williams, yep, that Billy Dee. PSI/NET is the result of that. Lando does cyberpunk. Seriously. You need to read it. – Steven Savile

The raft surged through the rapids, water splashing over the bow. Four sets of oars flailed the air and slashed the foaming white river. Helmets glinted in the midday sunshine and orange life vests bobbed across the rough waters. The rafters bantered back and forth.

"Now don't fall out again, Sam. I'm getting tired of dragging your ass back in here," chided a broad-shouldered man with hair tied in a ponytail to the chunky, bearded man on his right.

"Knock it off, Art. It's getting old. At least I keep my screw-ups to the river and not the office."

At the stem, river guide Trent Calloway tightened his grip on the rudder. His annoyance surged with each caustic exchange; he wanted to tell them both to shut up. Take it easy, he told himself. He'd talk to them as soon as they reached the rest stop. He shifted the rudder, moving the raft closer to the right side of the river. All the rafters, except Calloway, worked for a California software company and the trip was a company perk that they'd chosen.

Calloway peered out at the sandstone walls that rose on either side of the river. The rushing waters had etched out shallow caverns so that the walls seemed to lean over the river. He spotted a well-known petroglyph of Kokopelli, the ever-present hunchbacked flute player whose image had been carved on walls throughout the Southwest by the ancients—the Anasazis.

Not far now to the last rest stop, he thought. Then, they would make the final run to Mexican Hat, the end of the two-day trip from Sand Island.

Calloway had been hired as a guide last summer after taking a trip down the San Juan River with a local outfitter. The company had been short of help for the high season and Calloway simply said he wanted the job. He'd told Ed Miller, the outfitter, that he was retired from the air force and that was good enough. If Miller wondered why the Afro-American, who was still in the prime of his life, lived alone in a twenty-foot Airstream that he hauled behind an aging pickup, he didn't ask and that was fine with Calloway.

The San Juan ran high and fast, good for thrills and less chance of hitting rocks, but there was always the danger of losing a rafter or two over the side. The men wore helmets and life vests, but a tumbling rafter could still be seriously injured. The eight men with him, all in their twenties and thirties, enjoyed the challenge. But Calloway was glad this one was almost over. Twice now, Sam had fallen over the side. Fortunately, he'd clung to the lines and had been pulled back into the raft. The last incident had happened an hour ago and he was still taking heat from Art. Calloway was ready to tie him down and maybe stick a rag in Art's mouth.

"Okay, work hard now, concentrate," he barked. "This is a tricky rapids coming up. We're going to drop down fast so hang on tight."

"Hear that, Sam. That means keep your fat butt down," Art yelled.

"You too, pal!" Calloway shouted, then impulsively leaned forward and smacked the palm of his hand against Art's shoulder. At the same moment, the raft dropped down. The dip was faster and steeper than even Calloway expected. Icy water sprayed over everyone. The raft bounced hard, everyone lifted up, and when the raft came down, Art was gone.

He jammed hard against the rudder to keep the raft from going into a spin and when he looked over his shoulder, he glimpsed a blob of orange surrounded by foam ten feet away. He hurled a safety line back, but Art missed the rope. The raft hurtled through the white water and Calloway lost sight of him.

"Great. Just great," he muttered to himself.

Calloway veered around a rock and into a pool of quiet water near the wall. He spotted Art floundering in the rapids fifty yards downstream. The others shouted and pointed. "Okay, paddle hard. Let's go get him."

He nudged the rudder, turning the raft out into the middle of the river. Art still bobbed in the strongest part of the current and drifted farther and farther away. Then he disappeared around a bend. They paddled furiously. When they rounded the sandstone wall, the chop diminished, the water turned so calm that it felt as if the place were under a spell.

A flat, sandy area opened on the right, sheltered by low cliffs—the rest area. Calloway knew it as one of the better sites for viewing Anasazi petroglyphs on the cliff walls. Art stood in knee-deep water. He waved and hooted when he saw them and the sound echoed eerily around them.

"What a rush! That was great!" Art chortled.

But Calloway didn't pay any attention to him. Ten yards beyond Art stood three Indians—a man, woman and boy—near a fire. One of them, the man, held a fish on a stick, and all three ignored the rafters, acted as if they weren't even there. The man and boy wore loincloths, the woman was bare-breasted and garbed in a skirt that looked like deerskin. Long, scraggly hair added to their primitive appearance; they looked as if they'd just stepped out of the past. Suddenly, the man locked gazes with him and Calloway felt a sharp jabbing pressure against his solar plexus.

Feeling like an interloper, he looked away, and turned to Art, who trudged up to the raft. "Are you okay?"

Calloway ignored the question. "C'mon. Get in. Let's go."

"Bother who?" someone asked.

Calloway looked up. No Indians. No fire. As if they'd never been there.