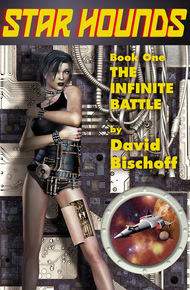 David Bischoff is the author of over 100 books including Nightworld, Star Fall and the upcoming Whiteviper.

After graduating from the University of Maryland in 1973 he worked for many years at NBC Washington. He moved to Los Angeles where he wrote TV scripts, two of them for Star Trek: The Next Generation. He now lives in Eugene, Oregon.

The Infinite Battle - Woman Against Universe (Book 1): Laura Shemzak. Irreverent, rebellious, beautiful. A woman with an impossible mission: to rescue her beloved brother, the most brilliant physicist of the Galactic Federation, from the clutches of alien invaders, the Jaxdron. To succeed, Laura must gain control of a top-secret Mark XT blip-ship. And to do that, she is forced into an uneasy alliance with the notorious space pirate, the bitter, cynical Captain Tars Northern.

David Bischoff was one of the first writers I ever read, though I didn't realize it at the time. It was his adaption of Wargames. Who doesn't fancy a nice game of global thermonuclear war? Seriously? After that, I had to read something else of his. That something else was The Infinite Battle, the first of his Star Hounds series. Right here, right now you get the entire trilogy. Then when you are done you can challenge Professor Falken... – Steven Savile

It was the kind of world that might have inspired Dante. An uninformed visitor might see it as a planet of the damned, a world of the doomed. Not that it was barren or hellishly hot, or tundra-cold. On the contrary, its physical properties made it look like some tropical paradise. An eighty-six-degree axial tilt and a regular orbit, combined with a high water-land ratio, made it a planet lush with life, both flora and fauna. Three separate kinds of intelligent alien life—all agricultural/hunters and preindustrial—had developed on the verdant continents. These races were, on the whole, peaceful until Discovery Day. Then the Federation arrived. They saw that this world, listed on the charts as AB 40, second planet of six around the primary Delta Theta, was perfect for the terraforming techniques Federation scientists had perfected. They created an ideal prison world of magnificent utility, far enough from the main thoroughfares of galactic life not to be examined too closely by individuals with a conscience.

The Intelligence operative deep in the corridors of the World's Heart Computer knew this. She also knew that an agent with access to the core data banks within the Block—the castlelike monolith that controlled the planet—could steal priceless information of incredible variety. That was why she had come here, posing as a biotech specialist, and infiltrated the upper-echelon of the Controllers of the Industries. That was why she was padding down the steel corridors as stealthily as a bit of hidden datum in a mainframe. The woman had come to open that core, a job deemed totally impossible by the experts.

But the woman was no ordinary intelligence agent.

The guard at the last door was a Conglomerate—a strange fusion of human, alien, and machine manufactured by the ecoindustrial process of this weird world. His antennae wobbled as he reached out to take her pass. Other appendages positioned the identiscreen sensors for retinal readings and additional security checks.

The woman reached across the desk swiftly, and a stunning jolt of electricity at just the right amperage passed from her hand to a control plate in the creature's squat neck, rendering it unconscious. Its oddly jointed limbs twitched as she carefully removed the creature's identity wires. She unbuttoned the loose workblouse she wore, lifted skin flaps, and attached the jacks to her own subcutaneous biotech apparatus.

For all practical purposes, for the next few minutes, until the system destabilized, the security devices would read her as the guard. It had taken a lot of hard work to buy just a short time—and if she wasn't done within the time allowed, the security system would align on her and burn her body to a cinder.

The agent smiled as she tapped in the opening codes. There was no possible way to finish the job wearing this security identity; she needed more time than it would provide. And when her identity dissolved, and the alarms rang, and all of the multibillion-credit defense weaponry was alerted that an unwelcomed entity was moving about in its most private places …

Well, she really wasn't certain what would happen then. No one had ever made it back to tell her.

But one thing was for sure, the agent thought to herself confidently as a static hiss marked the opening of the thick door: when those klaxons blew, and those guns had her in their photonet cross hairs, the drudgery of this assignment would end and the real fun would begin.

Quickly she slipped the guard's needle pistol from its holster and ran through the open door into the unknown.

Immediately she was presented with a choice: three separate corridors confronted her at thirty-degree angles. Tubing and wiring gleamed softly in the corridors' ambient lighting. The smell was, if anything, even more antiseptic than in the rest of the building, the familiar ozonish taste of electricity in the air.

Though she did not know which was the correct way, the agent hardly paused. The rubberized soles of her shoes smacked the tile floor of the rightmost corridor almost instantly.

It took less than thirty seconds to reach a location which, according to her cyborg sensors, was a tapping place. She unscrewed a panel and found the appropriate neural grid. Less than another forty-five seconds later her biotech consciousness was roving freely through the systems, piercing past the macros of the languages the vast computer understood, skirting even the machine codes, and diving directly into endless kilometers of circuitry, understanding their complexities with a power that was beyond analysis, close to intuition.

At her touch the entire security network shut down. The agent chided herself; her estimates had been wrong. She wouldn't have to dodge laser beams after all. Damn, and she had been looking forward to some significant exercise here!

With only a few moments' pause, her mind intuitively found its way through to the top-secret data banks, tapped what they needed, then sped back to the agent's corporeal form.

Dizzily she blinked. Even though she was accustomed to biotech transference, the stepping up of her mind through the macro circuits of the computer, the withdrawal was a heady rush, a sensation of almost druglike intensity. But she had what she needed stored in the nanobanks wrapped around her internal organs, and she had made the necessary adjustments inside the computer; no sense sticking around.

Quickly she ran back to the security guard, plugged its identity wires back, retraced her path through the other security measures she had passed to get there, then boarded an elevator.

The Governor of this world lived on the top floor of this massive citadel, in a penthouse restricted to a very few. With her new powers over the controlling computer network, the agent was inside the man's quarters within minutes.

He was sound asleep in his bed, snoring.

The agent walked to his bedside, cocked a forefinger, and placed it against the man's temple.