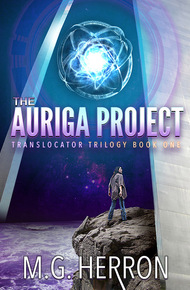 His characters have a sense of humor (except for the ones who don't). They stand up to strange alien monsters from other worlds... unless they slept through their alarm again.

Like ordinary people, Herron's heroes try to make the world a better place, and sometimes screw things up.

New readers can try out Herron's books and become a hero at mgherron.com.

The Auriga Project by M.G. Herron

Hurled into the great unknown

Ripped from Earth and transported to a strange new world, archaeologist Eliana Fisk is taken captive by the leaders of a native tribe.

What do they want with her? She's not sure, but they don't seem friendly.

When she discovers evidence of an ancient sacrificial ritual, Eliana fears she'll be next. Can she avoid becoming an offering to their bloodthirsty god?

And how in the worlds will she ever get back home?

You'll love the fast-paced action in this science fiction thriller. It's a harrowing tale of survival against all odds, and the gateway to an ancient alien mystery.

M.G. Herron crafts an enthralling tale in that sweet spot between space exploration and alien invasion. Amazon reviewers rate The Auriga Project (Translocator Trilogy Book 1) highly while praising the novel for its page turning storytelling. Here is just a sample of what readers had to say: "I couldn't put this one down. Herron's narrative is skillful, bringing the reader further into the nuanced plot line, interesting characters, and a hopeful love story." – Melissa Snark

The sphere of concentric rings around the platform spun, collecting the energy from the outer arch and concentrating it inside the sphere. The sphere spun, blurred, and radiated a soft turquoise brightness.

Then the light was gone, the rings wound down, and a lunar rover appeared on the platform—its squat, wheeled form perfectly intact.

The crowd exploded with applause. Reuben inputted a few more commands on the console and the rover rolled to Amon's side.

Amon tried to hide his smile. This was a parlor trick compared to what was coming next. The appearance of the rover had been meant to warm up the crowd and dispel their initial doubt. Carbon had merely been transported from the lab a few floors below ground. The surface of the moon, however, was hundreds of thousands of miles from Earth, and moving at an incredible velocity.

"Tonight, Carbon will be making the journey to the lunar surface. He's made this journey many times in our years of testing, but tonight is the first time he will do so in public. A team is waiting for him in the research biodome of the Lunar Station."

Reuben motioned, and a new set of parameters appeared. Amon waited for him to nod then said, "My wife, Eliana, will help me christen this maiden voyage. Sweetheart, if you'll do me the honor?" He held out his hand.

Eliana walked across the stage and took Amon's hand.

"Traditionally, you'd break a champagne bottle across the hull," Amon said to the audience. "But I don't know if that's recommended when we're working with electronics." When Eliana laughed, the crowd laughed along with her.

Amon and Eliana met Reuben at the control unit. As rehearsed, Eliana stood between her husband and Reuben in front of the screen.

Reuben keyed in a few commands, and a series of calculations scrolled up. Amon double checked Reuben's work as he did it, verifying energy levels coming in from the particle accelerator and calculating the moon's position, rotation, and velocity in real time. They didn't have to speak. Amon knew everything was going according to plan on Reuben's end by his grunts of approval.

When they were ready, Reuben verified radio communication with the lunar team then cleared the display and brought up a green Initiate button. The button was strictly for show and big enough for the cameras to make out.

Reuben nudged the button's digital image across the display so it was in front of Eliana. She reached out her left hand—her new ring glittered. When her fingers came into contact with the screen, she pulled her hand back sharply, as if she had been zapped by an electric shock. She rubbed her fingers and frowned.

"Are you okay?" Amon whispered into her ear, careful to hold the microphone away from his mouth.

"I'm fine," she said, quick to put a smile back on her face for the cameras. She moved a few steps from the display—not part of the stage directions they had rehearsed, but Amon was too distracted by what happened next to give it much thought.

The machine screamed as it came to life. The keening noise didn't go subaudible, but escalated into a banshee's screech. Electricity popped loudly across the arch, and great tree-like shapes of blue-white lightning shot into the air in every direction.

"Reuben, what's happening?" Amon shouted, turning back to the display. A graph that measured the energy output from the particle accelerator careened into the danger zone. Reuben gestured wildly, trying to regain control of the apparatus, but the holo controls were no longer responding to his increasingly frantic motions.

Amon dropped the mic with a clunk that was swallowed in the chaos. He leaped over to the display, yanked out a tactile keyboard from the base of the screen, and began rapidly typing in override commands designed to short-circuit the translocation.

It didn't respond to those either.

"Cut the power!" Amon yelled. Reuben was already tearing at the floorboards to reach the power cables beneath them. Electricity saturated the air, causing Reuben's hair to stand on end and wave wildly.

Reuben held up the control unit's plug. Amon glanced up and saw the display was dead. The arch continued to thrum with energy.

"Shit!" Amon said, already knowing it was too late. The redundant power cables connecting the arch and the translocation platform to the particle accelerator meant that they would have to cut all the power cables to shut it down. And there wasn't enough time for that.

"Eliana!" Amon yelled, twisting frantically as he searched for her. The light radiating from the sphere of rings this time was blinding, a bright-white sun that outshone the spotlights fixed on the stage.

He shielded his eyes with one hand and squinted into the light. The chairs where Lucas and Wes had been seated were empty—they must have retreated from the stage when the Hopper malfunctioned. Did they take Eliana with them?

But then he spotted her, silhouetted against the great ball of light that emanated from the sphere.

He sprinted toward her only to stumble into something hard that tripped him and sent him sprawling to the deck. He felt the bar of the microphone stand beneath him as he pushed himself back up.

He juked around Carbon, the lunar rover. She was ten feet from him now. Eliana stretched her arm toward the sphere of light, reaching. She gasped, her mouth widening, as the expanding radiance engulfed her wrist.

Five feet away. He lifted his knees, pumped his arms, reached out to grab her. The light swallowed her elbow, her shoulder, half her body. A terrible dread lined Amon's stomach with steel wool.

Two feet. He jumped, reaching out. Instead of coming into contact with Eliana, he felt the light as a physical resistance pushing back at him like a viscous liquid.

The feeling of resistance retreated suddenly. He slammed into the unforgiving hardness of alloy rings, knocking the breath from his lungs.

Eliana. He gasped and writhed on the ground, shocked from the impact. Where did she go? Gritting his teeth against the pain, he pushed himself to his feet.

Red spots crowded his vision. When they cleared, he saw that the stage was only illuminated by the spotlights now, and bulbs flashed from the media pit. The horrible screeching noise had ceased, but shouts from the audience filled his hearing. He stood on the translocation platform inside the alloy rings.