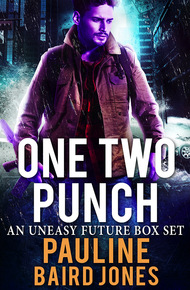 She's got the hots for her alien partner. He's hunting an intergalactic evil. Will these two cops risk a kiss when it might lead to death?

New Orleans New, 2061. Detective Violet Baker wants a real man who can put up with the judgement of her police brothers. So when the hunky alien cop shows up to help her evacuate the city before the hurricane hits, she doesn't care if his skin is purple. But she's forced to place her craving for romance on hold when they discover a grisly murder planet side…

Intergalactic policeman Dzholh "Joe" Ban!drn has pursued his foe across light-years. He knows the telltale wounds on the corpse and the scanners on the fritz are sure signs that he's almost cornered his evil nemesis. But with the threat so close, chancing even one kiss with the gorgeous Earthwoman could prove fatal.

As Violet scrambles to collect evidence before it's destroyed by the breakneck winds, she can't help but feel the officer is hiding something. And as much as Joe longs to trust Violet, he needs to keep her at arm's length as they face a manipulative enemy deadlier than the approaching cyclone.

Can Violet and Joe solve the mysterious case before they're blown away in a dangerous storm of emotions?

One Two Punch contain both books in An Uneasy Future science fiction romance series, a spinoff from The Big Uneasy Series and Project Enterprise. If you like sizzling attractions, page-turning suspense, and supernova action, then you'll love Pauline Baird Jones' intergalactic adventure.

Buy One Two Punch and dive into an interstellar mystery today!

USA Today bestselling author Pauline Baird Jones weaves masterful tales of crime-solving sleuthing and sizzling romance on an intergalactic scale. Pauline is always a pleasure to work with and I am thrilled to have her as a part of this spectacular Sci-Fi bundle. One Two Punch contains both books in An Uneasy Future science fiction romance series, a spinoff from The Big Uneasy Series and Project Enterprise. – Melissa Snark

His partner liked to call it the Big Uneasy and Dzholh—Joe—Ban!drn decided Violet Baker had a point. New Orleans was more often uneasy than it was easy. Joe studied said city while his partner, at the controls of the police skimmer, adjusted their course so they'd skim beneath, and avoid tangling with, the water umbilical. In his travels, he had seen floating cities on other planets. Cities that spun, orbited, and hid when threatened. Prettier cities. Why did this one feel special in its unease?

That they'd managed to raise so much of the old city, grafting on much that was new without a loss of its larger-than-life personality, was a feat he'd have deemed not worth the effort if he hadn't seen it, if he hadn't lived in it these past six months. Was it familiarity that made the old city seem valuable or was it the incoming hurricane?

Wu Tamika Felipe was—according to the news vids—the biggest storm to close in on the city since Chen, the storm that had almost wiped the original city off the map some fifty Earth years ago. Chen had been the catalyst to save what was left by raising it. Officially, dirtside was called New Orleans Old or NOO and the new city was New Orleans New or NON. To the locals, it was still the Big Easy or Nawlins.

Joe could understand why any city that endured severe flooding had been lifted up and out of the danger zones once the technology became available from his people. Most Garradians preferred a dirtside landfall, particularly after a prolonged time in space, so he found it puzzling that most of the major US cities and many European ones had followed suit. Even some of the smaller concentrations of population had opted for raising or had moved up into the lifted cities in the years that followed.

I believe it was a combination of something called the Green Movement and a fear of overcrowding and overwhelming the food sources, his nanite, Lurch, commented inside his head.

You believe? It was unlike the venerable nanite to be less than certain.

There is a lack of factual data. A problem that occurs when scientists consider their science settled.

Lurch had existed long enough to observe much science come unsettled. It was possible that this storm might unsettle the notion that floating cities were preferable to dirtside living. WTF would be the first trial-by-hurricane for the technology and, most particularly, for the ancient parts of the floating city. Not that the dirtside remains of the old city would fare well during the incoming storm. The storm surge would be, according to the experts, unprecedented.

Lurch snorted, the action registering as mild gastric distress for Joe. He could not blame the nanite for the snort. Unprecedented had experienced much usage in the news vids since the storm hit category five status. One might conclude that there had never been a category five storm, i.e., without precedent. Only most broadcasts had been detailing with considerable relish all the previous category five storms. Including the destructive force of Cat 5 Chen.

Apparently there are those who do not know the meaning of unprecedented.

It was a valid conclusion based on available evidence. Though the lack of understanding was not endemic. Those who did understand the meaning of unprecedented had made efforts to educate vidcasters through all means available to them. The public mockery had not changed anything that he had observed. Perhaps it was like trying to turn a meteor? Velocity, once achieved, being hard to redirect?

Perhaps you can create an equation for it after the storm?

The mental nudge was deserved, Joe acknowledged, though he doubted the storm's passing would provide much quiet reflection, if the pre-storm briefings taking place around the city were any indication. Those in charge of managing the city were optimistic in their public statements. But private briefings showed awareness of the incoming ass kicking—Baker's succinct summing up following several hours of briefings. His partner-in-crime-solving had no difficulty being direct.

Detective Baker has expanded your vocabulary.

Joe felt the nanite's approval of said expansion. Joe did not point out that his vocabulary was more than adequate or that it had already been expanded to include millions of alien languages when the nanite moved into his head. One did not tell a nanite what it already knew.

But you weren't using any of my additions.

At least Lurch did not call them upgrades.

"I hope this doesn't take too long," the detective in question, or rather in reflection, muttered, breaking off her humming and dancing. She handled the aging skimmer confidently as they curved into the shadow cast by the hovering city.

Joe murmured agreement even though agreement was contextually obvious. Of course they needed to expedite their transit. They'd dropped down from NON in the relative calm between two feeder bands. Neither of them had any desire to be dirtside when the next feeder band arrived, or if the stalled hurricane decided to start moving again.