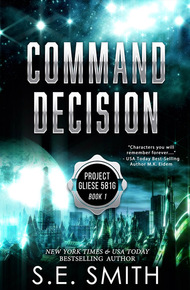 S.E. Smith is an internationally acclaimed, New York Times and USA TODAY Bestselling author of science fiction, romance, fantasy, paranormal, and contemporary works for adults, young adults, and children. She enjoys writing a wide variety of genres that pull her readers into worlds that take them away.

Seeking answers we are not yet ready for…

Lieutenant Commander Joshua Manson's career has taken him to many places, just not the one he has always dreamed of going – into space. His sometimes controversial methods during missions have given him a reputation as a rule-bender, so when Josh receives a summons to Washington D.C. after a challenging mission, he worries that soon he won't have a career at all. Once there, though, Josh is offered the chance of a lifetime, command of a mission investigate an unknown object in space. The more he learns, the more determined he is to do this, even if it means a one-way ticket.

Cassa de Rola's family has lived for centuries in the quiet valley where they farm. She fervently hopes their valley will stay quiet, but the growing unrest between intergalactic forces makes it unlikely that her family will remain untouched for much longer. When an unusual object falls from the sky and Cassa finds a strange male in the container, she knows that taking him in will endanger the lives of everyone close to her, but she can't leave him defenseless.

Both sides of the coming war are determined to discover the origins of the escape pod that crashed on the de Rola farm and find whoever was inside. The dominoes fall, and when the fight between the Legion and the Gallant Order escalates, a new rebel leader emerges from the stars that will change the galaxy, and Cassa's life, forever.

S.E. Smith holds the acclaimed titles of New York Times and USA Today bestselling author. By night, the author and her husband have a backyard observatory where they stargaze, capturing stunning photographs of the Milky Way galaxy. By day, she seeks to explore the potential of the great unknown through word craft. StoryBundle is pleased to be able to include Command Decision in Our Heroes. – Melissa Snark

Joshua Manson stood on the stands across from the launch pad in stunned disbelief. His gaze was frozen on the sky above him. Tears suddenly burned his eyes. They weren't caused by the brilliant sun or the chilled wind trying to cut through his jacket, though. No, the burning in them had to do with the unusual trail that followed the liftoff that was supposed to take his dad into space for the last time.

At almost eighteen, he and his dad might have had the occasional clash of wills; well, maybe more than an occasional one, but the fact remained that he had never missed one of his dad's launches. Even the fight they had last night over whether Josh should finish college before enlisting in the military hadn't prevented him from coming to silently support his father.

His dad wanted him to finish his degree first, and then join the Navy. Josh wanted to enlist in the Army at the same time as his best friend, Ashton Haze, so they could still do things together. It had been a stupid fight.

Josh really didn't know what even started it. It was like a red flag had flashed in front of his face when his dad started talking on the phone last night. He had argued with his dad about everything. Now, he wished he could take back his angry words; words he hadn't really meant. Pain pierced him at the thought. He stared at the sky with a growing sense that his mind was playing tricks on him.

"I'm so sorry," a voice whispered behind him.

Josh remained stunned, nodding his head in acceptance of the sympathy, even though the words couldn't penetrate what his mind was acknowledging. The Space Shuttle was gone, exploding in a fiery ball leaving spiraling ice crystal contrails in its wake as it fell into the ocean below. The sounds of crying echoed around him.

He jerked when he felt a hand on his arm. Blinking in an effort to focus, he saw a staff member of NASA security standing beside him, a grim expression on the man's face. The man said something, but Josh's mind couldn't decipher what he was saying. It wasn't until the man repeated his request that Josh nodded in understanding.

Josh moved numbly down the narrow steps of the bleachers, his gaze darting to the fading remnants of the shuttle's last path. Other family members of the crew were being guided to a large bus. He waited as several people entered ahead of him before he climbed the steps, almost choking on the heat inside the bus.

Sliding into a vacant seat, he stared out of the tinted windows. His father was gone. The last member of his family. He was alone in the world except for his best friend, Ash. His gaze jerked down when he felt his cell phone buzz. He flipped the top and looked at it, recognizing Ash's phone number. Pressing the connect button, he held it to his ear.

"Is it true, man?" Ash asked in a slightly husky tone.

"I know," Josh muttered, looking down so he didn't see the long line of cars and the people standing around talking about what just happened. "Thanks."

"I mean it," Ash said bluntly.

"I know," Josh replied, closing his eyes. "I'll talk to you later

Josh pushed the red button. He could feel the reaction of shock hit him like a rogue wave. Opening his eyes, he stared out at the launch pad's skeletal tower standing in the distance. His dad loved being an astronaut. He had once told Josh that there was nothing like seeing the earth from above to give you an appreciation for just how alone and isolated we were in the vastness of space. Right now, that space felt big, scary, and lonely to Josh.

"Goodbye," Josh murmured when the first wave of real grief hit him. "Aw, shit. I love you, dad. I hope you knew that. I love you," he choked out, closing his eyes when a fierce wave of pain swept through him.