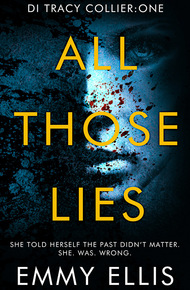 Emmy Ellis is the author of several detective series set in the north of England, and her current genre is gangland, in London. She has five children and resides in Nottinghamshire with her husband and youngest daughter. Her day job is editor and cover artist. When she isn't writing, editing, or creating art, she reads crime thrillers.

All Those Lies by Emmy Ellis

SHE TOLD HERSELF THE PAST DIDN'T MATTER. SHE. WAS. WRONG.

Detective Inspector Tracy Collier has a past she's convinced she can sweep under the carpet. There's a killer out there, though, who's out to prove her theory wrong. A body turning up, gutted and dressed to appear homeless, is the killer's calling card to lure Tracy into a world where she has to face her fears.

It's uncomfortable, being forced to meet her demons again, and she fights to keep the secrets locked away—but a therapist is determined to pull every single one of them out into the open, and Tracy is compelled to relive her younger years in vivid detail.

Who is killing these people—and why? Who seems to want to bring Tracy to her knees, sending her back to a place she vowed never to return?

And who wants her to admit to all those lies?

Meet Detective Tracy Collier as she tracks down a killer in Emmy Ellis's 'All Those Lies.' Collier told herself the past didn't matter, but she was wrong. – Marissa Farrar

Despite the recent rain, the sun was out in full force, its rays creating a slanted rectangle on the concrete floor of the barn just inside the doorway. The light showcased bits of ancient hay, a couple of muddy footprints, and a few cigarette butts that appeared to have been discarded in the last century they were that dried out. They reminded Tracy of crumpled finger bones with faded beige tips. She shuddered, taking a closer peek to ensure they really were just cigarette butts then, satisfied nothing sinister was afoot there, faced Damon.

"Watch you don't tread on those footprints," she said. Why she'd said it, she didn't know—Damon was proficient in police protocol. Force of habit, then, so she never got hauled over the coals for cocking up on the job?

She inhaled another deep breath. Stared straight ahead at the victim. Blimey, it was similar to last week. Guts on display, draping out of a body that had been strung up from one of four rafters still somehow firmly in place. A huge hole gaped in the roof to the left, and the sun found its way in there, too, casting a jagged shape on a bale of hay below and a rusty pitchfork propped against it.

A drying puddle of blood glared at her from beneath the victim's feet, which were about a metre or so off the floor. A lump barged into Tracy's throat. His shoes… Worn out, they were, coated in blood, mud, and with holes in the toes. No wonder the deceased had been assumed homeless.

She lifted her gaze and couldn't tell if he had been truly destitute or whether his appearance had been made to look this way, what with his hair matted with blood, his face streaked with it, his ragged clothing, too. But that clothing—it seemed deliberately wrecked, like someone had slashed at his burgundy shirt and black jeans. Maybe he'd been someone down on his luck and hadn't been able to afford new shoes.

"Go away for a minute or two, will you?" she said.

The last thing she needed was to be worrying about him. Maybe she shouldn't have brought him after all. Everyone had lapses of judgement from time to time. In her case, she'd made the wrong call for the first eighteen years of her life.

Damon retched somewhere behind her.

She blew out a forceful stream of air and resumed her perusal of the body. This poor sod might have a family somewhere. Were they worried yet? Had they filed a missing person report already? She couldn't even officially check his pockets—not until Kathy and her team had arrived, photos of him in situ had been taken, then the sometimes lengthy wait for the body to be taken down had been performed.

Damon had stopped heaving, so she swivelled to check how he was doing. Pale-cheeked, he was shaking, eyes closed, face tilted to the ceiling. He was going through it, then, the shock, the distress, his mind probably working overtime as he tried to process his thoughts and feelings. If he joined her at enough body dump sites, he'd find it got easier as time went by. Her sheltering him from these visuals wasn't doing him any favours, so yes, she had done the right thing in bringing him out here today.

"Oh God. Doing what?" He opened his eyes, lowered his head, and stared straight at her.

"Lugging that ladder over here." She gestured to a free-standing wooden one leaning on the right-side wall.

"You're never going to get him down yourself, are you?" He widened his eyes, and his mouth dropped open.

"No, Damon, I am not going to get him down myself. Fucking hell, do I look stupid?"

Damon sighed and traipsed over to get the ladder.

On his return, she said, "Pop it here, away from the blood. I'll just have to lean over, that's all."

"Check his pockets. We need ID, and waiting for Kathy and crew to get here would be—"

"What, you can't wait five minutes?" He pursed his lips and narrowed his eyes.

"Patience at work was never one of my strong points, you know that."

"Christ. You'll lose your job one of these days." He shook his head and checked the ladder was steady.

"I expect so, but until that day arrives, I'll carry on as usual."

She climbed the ladder up to halfway and, as she'd said, leant over and slipped her gloved finger into the pocket closest to her, switching her mind off from the fact the body was swaying from her probe. If the killer had done his usual, there would be ID to find. Even knowing their names, finding out their lifestyles, searching their social media and phone records—not one of the dead seemed linked. No rhyme or reason as to why he'd chosen them.

Maybe there isn't a reason. Maybe he just picks people who are in the wrong place at the wrong time—or the right time for him.

She touched something and almost whooped with joy. She reached across with her other hand to hold the man still, then dug her thumb into his pocket as well and drew out a brown wallet—relatively new, not something a homeless man would necessarily own. Quickly, she balanced on the ladder while rooting through the contents.

With the arrival of Kathy imminent, Tracy put the wallet back then climbed down the ladder. Damon didn't need asking—he returned the ladder to where he'd found it. Tracy steadied the body so it stopped swaying. She stepped back, surveyed Urwin to make sure he appeared the same as when they'd arrived, and nodded.

"Except you have blood on your gloves and the sleeves of your suit. Kathy is going to know you touched him." Damon grimaced. "Honestly, Tracy, this kind of crap has to stop. You forget I cover for you, keep my mouth shut when you get up to this sort of thing. I shouldn't have to do that." He peered over his shoulder. "And neither should those two out there. What if they saw you?"

A glimmer of guilt fluttered in her belly, soon gone when she told herself the quicker they found evidence against the killer, the quicker she could arrest the bastard.

"Best I take this lot off, then." Tracy strode to the side of the doorway and removed her papers and rubbers. She balled them up, hiding the blood, and tucked the bundle beneath her arm. "There. Stop worrying."

Damon left the barn with her, and they stood outside, Tracy squinting from the sun beaming directly in her eyes.

"Ah, Kathy and the others have arrived." She gave Damon a quick glance—shh, all right?—and pasted on a suitably grim expression.

Kathy strode towards them, thin as ever, her black ponytail swinging from side to side. A short, wide photographer trotted behind her, the sun glinting off his bald head and the lenses of his horn-rimmed glasses. SOCO followed, too—two men, lanky, middle-aged, going grey at the temples—their faces showing they didn't relish the job ahead.

Tracy pressed the balled-up wad of paper clothing closer to her body. Maybe she worried they'd spot it, maybe she didn't, but it was too late to feel much of anything now. She'd broken protocol, and that was all there was to it. She'd suffer the consequences later—if and when they arose.

"All right, Tracy?" Kathy asked, stopping in front of her as though a brick wall prevented her going farther.

"Not too bad, considering." Tracy smiled and jerked her head in the direction of the barn.

The photographer and the other officers walked past—Tracy assumed they'd go straight into the barn, getting to work, no messing about. Good blokes, they were.

"It's the same as the others in there," Tracy said. "Guts out and whatnot."

Kathy grimaced. "Bloody hell. This is getting worse."

"You're telling me. Hanks has puked, by the way."

"Now there's a surprise." Kathy smirked. "He needs to toughen up, that one."

"Yeah, well, some people have such queasy stomachs, don't they?" Tracy winked.